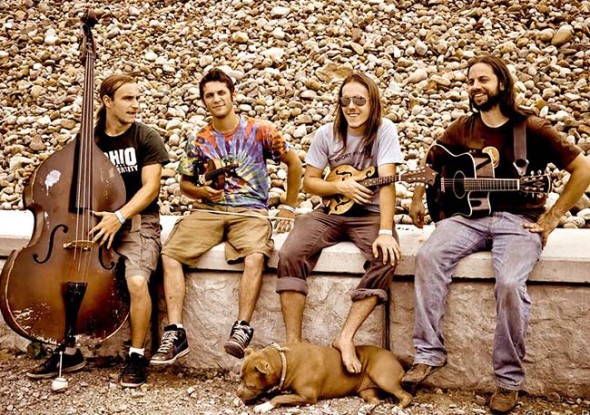 Local four-piece string band Blue Moon Soup is making a name for itself in the region with a sound that blends bluegrass, Celtic traditional, folk and pop. From left is Jon Bauman, Robbie Marion, Brendan Moore, Justin Moon and pitbull “Blue Moon.” Blue Moon Soup plays a benefit concert for WYSO at the Clifton Opera House at 7 p.m. Friday, May 16, with Irish duo Changeling. (Submitted photo by Suzy Perler)

Click here for an original video of Blue Moon Soup playing a track from their new album.

If the wizard Gandalf was a fan of the Grateful Dead, he would probably also listen to the Blue Moon Soup string band.

The local four-piece band, which drops references to the Lord of the Rings wizard and spawns wild hippie dancing at shows, all while pleasing die-hard bluegrass fans with its fiddle-driven improvisations, is on the rise.

With music that sounds as good around a campfire as in a bar, Blue Moon Soup blends chucking mandolin, floating fiddle, lush guitar and plucked upright bass with a splash of rich three- and four-part vocal harmonies to taste, seasoned with a pinch of medieval chord progressions. Simmered for four years, it makes Blue Moon Soup.

“The soup idea is we’re a concoction of different ingredients — and we’re down to throw anything in at any time,” guitarist Justin Moon said in a recent interview.

A group of mostly 20-somethings who are gaining some popularity on the festival circuit are bringing their act home next week for a concert benefiting local public radio station 91.3-FM WYSO.

Blue Moon Soup headlines the benefit at 7 p.m. Friday, May 16, at the Clifton Opera House, 5 South Clay St., Clifton. The opening act is the local Irish traditional string duo Changeling, made up of fiddler Deborah Clark Colón and guitarist Carl Colón. With both bands, patrons can expect high-energy danceable tunes and silvery ballads well into the night. Tickets cost $10.

According to fiddler Robbie Marion, the band wants to “give back to the community” — a community that in no small way gave rise to its success. Twenty-two-year-old Marion, for one, learned fiddle at age 10 from current Clifton Opera House curator Brian Ehlers. Brendan Moore, the 21-year-old mandolinist, came up in town playing with other local musicians, and taking notes from his father, jazz cornetist Chris Moore and his mother, the late Christina Hess, a singer and guitarist for local Celtic band Heartstrings.

Blue Moon Soup was officially formed by Moore and Marion in 2010, but the duo’s musical collaboration dates back to McKinney Middle School orchestra and the Yellow Springs High School courtyard, where the two would play guitar at lunchtime.

Moore progressed to playing loud rock music through maxed-out amps in various basements around town, before stripping down to acoustic mandolin, though he still plays electrified bass for local trio Sport Fishing U.S.A. Marion, meanwhile, trained in classical, bluegrass and Irish, but now prefers to play the fiddle, not the violin, a distinction which Moore clarified.

“They say the difference is you can spill beer on a fiddle,” Moore joked.

While the band has entertained banjo players, guest musicians and many a guitarist, they’ve recently settled on a lineup they’re confident in.

“A bunch of people have come and gone,” Marion said. “We definitely like the core we have now. We’re pretty solid.”

The group also includes upright bassist Jon Bauman, 21, of Xenia, and Moon, 33, who lives in a rural area between Yellow Springs and Springfield.

Nailing down the equally funky and folky sound of Blue Moon Soup is tough, especially when the group sees itself as separate from the recent folk-pop movement sparked by bands like Mumford & Sons and the Lumineers. As Marion says modestly, “we probably got into the bluegrass thing before this recent resurgence.”

But Blue Moon Soup would be equally at home in the 1940s Appalachian bluegrass scene as they are in the 2010s indie folk revival; they could hang with centuries-old Celtic traditional groups as well as 1960s jam bands, and would kill in 1930s gypsy jazz clubs as much as 1960s folk festivals.

And since their older bluegrass fans may go to bed at an earlier hour, Blue Moon Soup has come to cater more to a young crowd that packs bar shows that start at 11 p.m., and shows up for the 3 to 5 a.m. time slot at outdoor festivals. That has meant a move into a new subgenre called “newgrass” and towards a true jam band in the style of the Grateful Dead or Béla Fleck and the Flecktones.

In fact, while listing their influences, the band quickly dispenses with the Dead and banjoist Béla Fleck, name-drops mandolinist David Grisman, country and bluegrass legend Tim O’Brien and Irish folk musician Andy Irvine, and references the Beatles, the Band, Neil Young and Bob Dylan. They don’t cite Mumford & Sons as an influence, but the band does acknowledge that’s where many of their fans may come from. Instead of that more precious Mumford & Sons’ sound, Blue Moon Soup goes for high intensity in the vein of EDM — electronic dance music — and soothes those fans’ digitally overburdened ears with real analog sounds.

Blue Moon Soup has been blowing up in recent years, especially since the release of its second album last September, which features nine tracks showcasing the best of the band’s abilities and packaged with original and reproduced medieval art. The group has toured in Colorado, all over Ohio as well as Kentucky, Michigan and Pennsylvania, where it drew more than 300 for a show in Pittsburgh recently. Just last weekend the band took its 1990 Chevy van down south for shows at a rural Alabama festival and in a Georgia cantina.

But Blue Moon Soup looks forward to playing before a local crowd and in the historic opera house — built in 1893 — which pairs well with its old-timey sound and Barbershop harmonies. The band is prepared for the unexpected, as last time they played there, a woman with “Dolly Parton” hair came up on stage to sing the ’60s bluegrass tune “Rocky Top.” Dancing is almost guaranteed at the show, and the band is used to seeing many dancing styles.

As for Blue Moon Soup’s new album, it spans bluegrass standards to Celtic ballads, an instrumental track featuring a Chinese pentatonic scale to a song with a Latin beat and claves. The self-titled album is at once sprawling and focused by its fantasy elements. Songs reference crowns, 2,000-year-old curses and J.R.R. Tolkien characters, speak of natural elements like seas, mountains and stars and touch darker themes like death, murder and demons. Take “Mithrandir,” a sweet ballad using the “Lord of the Rings” character Gandalf’s elvish name:

“So long! Until we meet again I’ll sing your song/ By the light of the moon I will find my way home/ Hold on, the riders cross the Brandywine at dawn/ And I must be away before the morning.”

The album says many goodbyes and makes references to quests, which seems fitting for the road-regular band that is making a name for itself far beyond the borders of Yellow Springs, far from the shores of the Little Miami.