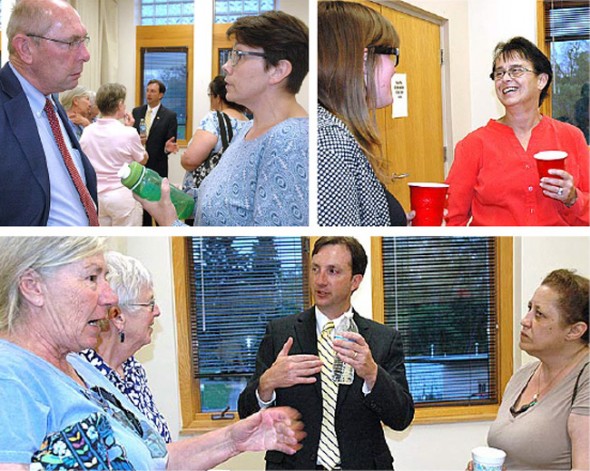 About 100 villagers attended last Thursday’s candidate forum at Bryan Center, where the three manager finalists answered questions formally to an audience, and then informally at a reception. Shown above at the reception are, clockwise from top left, candidate Bob Kellogg and Dawn Johnson; Rose Pelzl and candidate Patti Bates; and from left, Peggy Koebernick, Sandy Love, candidate Dave Elmer and Chrissy Cruz. Village Council will announce its decision at its June 2 meeting. (Photos by Diane Chiddister)

The value of effective communication emerged as a theme during last Thursday evening’s community forum for the Village manager finalists.

“If you bring people together in the same room, you’ll get a better result,” said candidate Patti Bates, current administrator in Williamsburg, Ohio, in answer to a villager’s question regarding how she would handle conflicts between local businesses or colleges and citizens.

Bringing together diverse groups to resolve a conflict was also noted by candidate David Elmer, former administrator of Pierce Township, in answer to a question on how he had solved a problem in his community.

“Everyone wants to be loved, respected, to be part of a community,” he said. “Rather than focus on the differences between groups, it’s important to focus on commonalities.”

And Bob Kellogg, former manager of Sewell’s Point, Fla., emphasized the need for communication in encouraging engagement from people of color, and all ethnic groups, in Yellow Springs.

“If they’re leaving, you have to find out, what is the problem?” he said.

The manager candidates forum, attended by about 100 villagers, took place at the Bryan Center gym. Candidates first individually responded to several prepared questions, then took questions from the audience. An informal reception followed.

The event was a part of a two-day intensive vetting process for the final three candidates for Village manager, who were chosen from 61 applicants.

On Thursday, the candidates met with Village staff, along with small groups of villagers. On Friday, they continued small group meetings and also met leaders of Antioch College, Antioch University and local schools. They then had a final interview with Village Council members, who met in executive session later Friday. Council has not yet made the official decision on the new manager, according to Council member Brian Housh on Tuesday, but plans to do so at its next regular meeting on Monday, June 2, following an executive session.

During the two days, about 40 villagers met the candidates in both small and large group sessions, and participants said seeing the finalists in a variety of venues was helpful.

“The small informal meetings were very useful in getting a sense of how the candidates interacted with those who had different levels of technical expertise, how well they listened and articulated ideas,” said John Eastman, who took part in two breakfasts and one lunch meeting with the candidates. “And the public forum gave a different sense of the person.”

Lisa Goldberg, who also took part in three small group meetings, found most of the process “very effective,” and she was especially pleased to see the diversity in the small groups. Organizers aimed at including a variety of stakeholders, including long-term residents and new arrivals, young people and senior citizens, and those with diverse opinions on current hot-button issues, such as the CBE, according to Housh, who organized the vetting process along with Council member Gerry Simms.

“I was happy and impressed with how many citizens were willing to participate,” Housh said, stating that all who expressed interest in taking part in the small groups had a chance to do so.

While Goldberg said she was concerned about the effects of the two “killer days” of activities on the candidates, the three finalists expressed appreciation for the process, according to Housh.

“None of them had ever been through anything like this in any other community,” Housh said. “They were impressed that people took the time.”

How to spark the economy?

In response to a prepared forum question regarding how to promote economic vitality, Bates offered strategies aimed both at attracting new businesses and beefing up old ones.

After finding out the available space for commercial development, Bates said she would contact the Dayton Development Corporation to find companies seeking to move.

“Finding out what you have and marketing it is most important,” she said.

However, she also advocated keeping in close communication with existing businesses.

“In Williamsburg, I walk down the street and ask business owners, what do you need?” she said.

In response to the same question, Elmer also emphasized the importance of keeping tabs on the needs of existing businesses. While most think of economic development in terms of municipal tax breaks or other government actions, “for most small businesses, what they’re looking for is information and networking opportunities,” he said, stating he would regularly communicate with existing businesses and “develop a strategy customized for each.”

In response to a question regarding how the candidates would address the declining African-American population, Bates said she would initially contact black community leaders.

“We need to find out the reasons for the decline, then work to resolve them,” she said.

Kellogg sought to broaden the question to include all minority groups, including “Japanese, Chinese and Latinos.”

“We have to encourage all non-Caucasions” to stay in the village, he said, and “if they’re leaving, find out what’s the problem.”

Elmer emphasized the need to take a pro-active stance to stay in touch with any group that feels disenfranchised.

“It’s important not to be passive, but to reach out to them,” he said, stating that he might engage the help of the local 365 Group wtth the issue.

The finalists agreed that it’s important for a Village manager to take an active role in the community. According to Elmer, Yellow Springs has been a destination for his family ever since he was a boy, and he’s impressed with the town’s amenities.

“I think this would be a great place to live with my family,” he said, stating that the village “offers as much if not more as a town twice as big.”

Kellogg stated that part of his interest in working in Yellow Springs is its proximity to Springfield, where his wife may have a job opportunity soon. Were he Village manager, he would be present in the community.

“I plan on being visible and active,” he said.

Bates said she does not actually live in Williamsburg, where she works, because the village doesn’t have a residency requirement for its manager, and she and her husband already owned a home in a nearby town. However, she said, she would move to Yellow Springs if she gets the job.