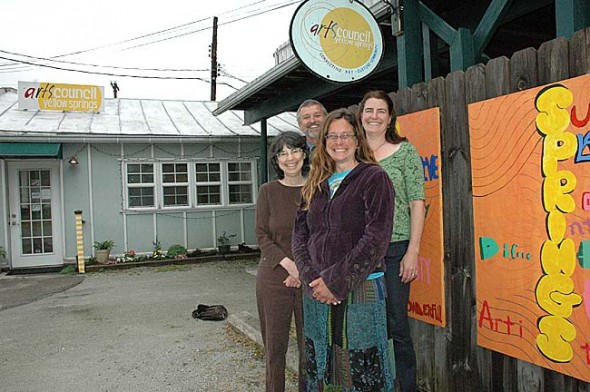 Yellow Springs Arts Council Board President Jerome Borchers, top left, is shown with the group’s part-time employees, clockwise from top right, Holly Underwood, Lara Bauer and Nancy Mellon. Since the Morgan Foundation last year cut back on funding, the arts group is finding new ways to sustain itself, including an online fundraising effort to pay rent for its gallery. (Photo by Diane Chiddister)

It’s been a year since the Morgan Foundation announced its suspension of about $1 million in annual grants to local and regional agencies. While the funding loss cut a swath through local nonprofits, the Yellow Springs Arts Council, or YSAC, was hit hardest, as the organization in recent years relied on the foundation for most of its operating costs.

According to YSAC leaders in a recent interview, the group is still adapting to the new normal. It has cut staffing, eliminated grants to artists, launched new fundraising efforts and, overall, taken fewer risks.

“We had to go back to the basics in many ways,” YSAC President Jerome Borchers said.

Perhaps not surprisingly, this group of artists has also, in its fundraising efforts, become more creative.

Specifically, the arts group is currently holding a fundraiser on the online marketplace Power2give. With a project (and YouTube video) titled, “The Little Gallery That Could” the YSAC seeks $3,733 to fund this fall’s rent on its Corry Street gallery. As of this week, the group still needs $1,013, with 22 days to go. Donations will be matched by DP&L.

“The idea is to get many little donations,” YSAC Gallery Coordinator Nancy Mellon said. “It’s a different kind of fundraising.”

But the continual fundraising can be wearing. While more and more municipalities support funding the arts as an economic driver, it’s been frustrating to YSAC leaders that Village Council has turned down several funding requests. And while the group has many small donors, it lacks the major donors that could give it stability.

YSAC leaders believe that, especially with the group’s increased efforts of recent years, the arts have made a significant impact on the village. For instance, in the years when Antioch College’s future remained in limbo, an energized arts scene gave Yellow Springs a new source of hope.

“When the college closed, the increased art activities gave the village a possible alternative for reinvention,” Borchers said.

All in all, YSAC leaders wonder if villagers understand how much time and energy goes into making Yellow Springs an arts town.

“I don’t think people get what all the Arts Council does, and don’t get what will go away if it shrinks further,” YSAC Office Manager Holly Underwood said.

Beefing up the Arts Council
Several local nonprofits grew their capacity thanks to the Morgan Foundation. For instance, the foundation donated $60,000 to Home, Inc. for operational support so the land trust organization could add a second position, and made a one-time $90,000 donation to assist with the purchase of land for four affordable homes on Cemetery Street. The Morgan Foundation also donated $35,000 to the Tecumseh Land Trust in 2012 to help that group build its stewardship fund.

But the foundation’s most sustained support, in line with its initial effort to create a new center for the arts, has been to the local Arts Council.

The YSAC has been a presence in town for 60 years, according to Mellon, but until the infusion of Morgan Foundation resources, the group played a different and more limited role. The group, which focused mainly on the visual arts, met monthly, and only occasionally sponsored an arts event, such as the Chamber Pot gallery in the train station.

That all changed in 2007. At that time, the Morgan Foundation-funded Committee for the Center for the Arts, which had spent several years seeking a site for a new performance space, held a community forum to gather villagers’ input. The event redirected the group away from building a new arts venue and toward beefing up already-existing arts groups and venues.

“We approached the Arts Council to see if they were open to increasing their capacity,” said Borchers, who at the time was head of the Center for the Arts group.

The YSAC enthusiastically said yes. With Morgan Foundation funding of $20,000 to $30,000 yearly, increasing to $54,000 in 2012, the group expanded its reach. The YSAC opened its first physical space at 108 Dayton St., then moved to more spacious digs at the Oten Gallery, where it stayed for two years. In 2011 the group moved to its current Corry Street location, between Williams Eatery and “would you could you” In A Frame. The space has been a boon for the group, as it provides both a gallery for visual art and an open room for performance, including poetry readings, live music and dance.

“Having a space makes such a difference,” Mellon said.

And with the foundation funding, the YSAC began a new practice of, whenever possible, paying artists.

“Before, there was never enough money to pay the artists for their work. Artists have been so plentiful in town and willing to give, that people forgot they need to be paid,” Mellon said.

Along with the new space and funding for artists, the YSAC added several (parttime) staff, including an arts and cultural manager, an office manager, a bookkeeper, a gallery coordinator, and a coordinator for the Yellow Springs Experience. All of these components of the group’s increased capacity “expanded hugely who we are,” Mellon said. This expansion meant an enhanced arts presence in town and a variety of new events, including Artoberfest, Wellness Weekends, the Yellow Springs Experience, and, last year, the Bronze Symposium.

“We had an exciting momentum,” said YSAC employee Lara Bauer of the group’s recent years.

The new normal
Following the Morgan Family Foundation’s announcement last spring that funding would soon be cut due to a large donation to Antioch College, the YSAC board quickly took stock of their situation.

“The immediate question was, what do we need to maintain?” Borchers said.
After eliminating the half-time arts and cultural manager position, the YSAC board members agreed to become a more hands-on group, with all members accepting additional responsibilities.

“We could not keep the doors open without them,” Borchers said.

The group kept its other part-time positions, although most actually involve fulltime responsibilities, according to Mellon. It has also been able to keep its Miller Fellows, Antioch College students paid by a bequest from Nolan and Richard Miller.

So far, the group has been able keep the YSAC gallery and performance space open, and hopes it can continue to do so. A gallery committee of seven artists, led by Mellon, continues to develop new fundraising ideas for the space. Last year, they held the holiday event Art Jumble, which brought in about $3,000, and the Art House Hop. This year, a July fundraiser event is scheduled, and a Christmas show.

Aside from the need to continually raise money, the biggest change, according to Borchers, is that the Arts Council is no longer able to take chances, to take risks with events or projects that might not be financially viable.
“The biggest cut is no longer implementing things we might like to try,” he said.

While the group gets occasional funding from the Yellow Springs Foundation for specific projects, that group, unlike the Morgan Foundation, doesn’t fund operational costs.

Increasingly, municipalities across the country are finding ways to fund the arts due to its effectiveness as an economic driver, according to the nonprofit Americans for the Arts, which in 2006 stated that 350 cities and towns had municipal public art programs. A variety of funding mechanisms have been used for this purpose, including the institution of a “sin tax,” such as Cleveland’s cigarette tax that has provided $33 million to arts and cultural events since 2006. In Kettering, a “percent for the arts” program sets aside 1 percent of the city’s capital projects budget to pay for arts activities. Research, such as an Americans for the Arts 2005 study, have shown that visitors who come to a town for arts events spend twice as much as locals (an average of $40 compared to $19.50) due to added spending on dining, hotels, etc. A Bowling Green University 2009 report stated that Ohio’s “creative industries” produce $25 billion to the Ohio economy annually, along with producing about 25,000 jobs.
These statistics, plus the obvious increase in village tourism in recent years, should indicate that the arts are an economic driver in Yellow Springs as well, YSAC leaders believe. Consequently, they would like to see Village government show more support. While Village Council has said that if it supports the YSAC, then it also must supports other nonprofits, they beg to differ.

“In a lot of ways we’re different from other nonprofits. We’re an economic driver,” Borchers said.

The arts group is extremely grateful to the Morgan Family Foundation for its past generosity, leaders said. And they hope that now that the foundation has pulled back its support, others will see what an enhanced arts presence can do for the village, and take up the slack.

“People say the arts are so important,” Borchers said. “So why not walk the talk?”