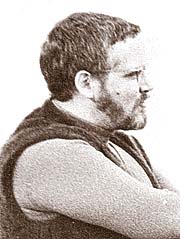 James (Jim) William Jordan, former resident of Yellow Springs and Antioch College faculty member, died June 5 in Fairfax, Calif., at the age of 73. He is survived by his wife of 34 years, Barbara Kohn; children Strider Jordan, Robin Glantz and Jennifer Johnson; as well as numerous grandchildren and great grandchildren.
Jim was born in Memphis, Tenn., earned a BFA at the University of Texas, Austin, followed by MA and MFA degrees at the University of Illinois, all but dissertation in art history at Harvard University and a Ph.D. in human systems and psychology at the Saybrook Institute, San Francisco, in 1985.

Jim joined the faculty of Antioch College in 1965. He taught art history, drawing, printmaking and painting. Through most of this time he was chair of the art department, and in the early 1970s was instrumental in the creation of the “new art building.” In a time when cross-disciplinary ferment was being actively explored at Antioch and elsewhere, his diverse background and interests made him a dynamic participant in the “Antioch experience.” His lectures in art history were animated and wide ranging in scope, pointing out recurring themes and modalities across centuries of artistic expression. Many students described these lectures as “incandescent and out of sight.” While at Antioch he distinguished himself as curator of retrospective exhibitions of the work of Robert Whitmore (Antioch’s first art professor) and the printmaker Sidney Chafetz of Ohio State University. For each exhibition, Jim authored lucid, probing accompanying essays. He exhibited his studio work at mostly regional venues, including the Dayton Art Institute and the Contemporary Art Center in Cincinnati. Throughout his life, whether in the studio, writing or teaching, he continually used his training and talents to engage the ecstatic and along the way to unhinge stodgy paradigms.

Jim left Antioch in 1981 to serve as chair of the art department at South Dakota State University in Brookings, S.D. During this time, he secured grants from the National Endowment for the Arts to bring nationally prominent artists to campus to do a variety of experimental projects.

In 1984, Jim left South Dakota and traveled with his wife Barbara to San Francisco, where he wrote on art, photography and philosophy for various magazines and books. He was a guest teacher at a number of Bay Area colleges and universities.

Jim and Barbara entered Zen training at San Francisco Zen Center in 1985. They became priests for a time. Jim’s zen work included care of the abbot, plumbing, book keeping and encouraging new students to think outside every box, even the zen one. In 2000, he moved to Austin, Texas, with Barbara, where she led the Austin Zen Center for nine years. During that time Jim continued to draw, think, cogitate and let his mind range in many directions. Living on a ranch, they rescued dogs, enjoyed the owners’ horses and looked over the valley at Willie Nelson’s home.

Jim and Barbara returned to the Bay Area in 2009. In declining health, he became an avid user of computers which enabled him to pursue diverse research and stay in close touch with friends and colleagues across the country. He was afflicted with chronic obstructive pulmonary disease, diabetes and heart disease; increasingly so since 2011. He died in his sleep.