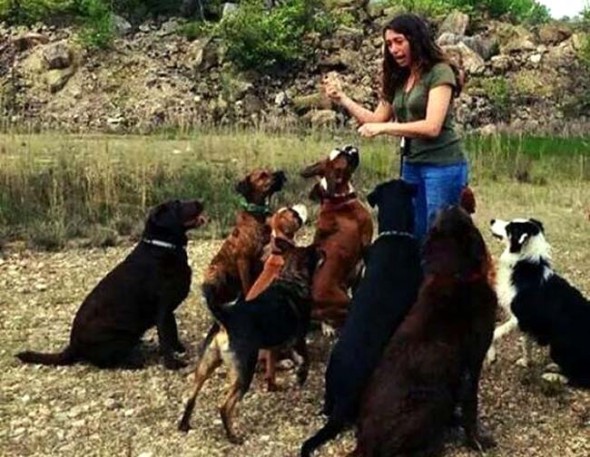 Local resident Becky Teilhet, who died after being struck by lightning in Colorado July 11, is shown here with some of her beloved canine friends. (Submitted photo)

She led with her heart and her spirit

Becky Teilhet was beloved by many in the Yellow Springs community, known by family and friends for her unusually kind and generous nature.

“Becky led with her heart and her spirit. She was drawn to innocence and was a steadfast and fierce protector of that innocence, be it of another person, animal or the plants and trees,” said Jenny Cowperthwaite, a close friend and neighbor, in an email. “She cared deeply for many and for so much, and in my experience continually, yet softly and unobtrusively, acted on that caring, which allowed you to feel less alone and wholly/holy supported.”

That Becky had a legion of friends was clear at the Friday evening visitation, when hundreds lined up and waited outside the door of the Jackson Lytle Lewis funeral home to pay their respects. The four-hour visitation stretched to five instead, as a steady stream of young people, children, elders and everyone in between wound their way from the sidewalk outside the building to the visitation inside.

Becky, almost 42, died when she was struck by lightning on Friday, July 11, at Rocky Mountain National Park. She had traveled to Denver with her husband, Justin, a ceramic artist and member of Yellow Springs Pottery, to an art show in that city and later the two pursued their passion for hiking in the national park. While it had been 14 years since lightning killed anyone in the park, Becky’s death was the first of two lighting fatalities that weekend in almost the same spot.

On that day, the couple, along with a good friend, were hiking above the treeline on the Ute Crossing Trail, “in one of the most beautiful places in the world,” Justin Teilhet said in an interview last week. It was a sunny day but when the trio noticed a black cloud rolling in, they began walking quickly back to their car. Justin never saw lighting, he said — but suddenly he was down on the ground and trying to get up while their friend administered CPR to Becky. The couple’s friend, Nick Tertel, performed CPR for an hour until medics arrived. Becky died later at the scene.

“He was a hero,” Justin said of Tertel.

Justin was transported to a medical center, then released two days later and flew to the family’s home in Clifton. The couple’s son, Jay, who had traveled to a different art show to exhibit his original jewelry, immediately came home when he got the news. Last week the two, in a blur of shock and loss, were held together by the caring of their extensive network of family and friends, Justin  said.

“There are no words to describe this outpouring of love and support,” Justin said.

But one other thing  keeps Justin going, and that is his mission to talk about Becky. Above all, he wants to get the word out about Becky’s  life, especially her extraordinary kindness, so that others can help pass it on.

“She was there for anyone, all the time,” Justin said. “You could ask her a favor and she wouldn’t hesitate. She’d just say, ‘sure,’ and she’d be there for you.”

Becky especially had a soft spot for children, and for many years she and Rhonda Kumbusky worked for Heather Knoth at Sunshine Day Care on East Enon Road. Children loved her back, Justin said, because she treated them with love and respect.

“She loved their innocence, joy and surprise,” he said. “Their excitement over a ladybug or a leaf of grass — she knew that’s what we need more of.”

The child she loved the most, of course, was her own. Jay was born when the couple were both 17, seniors at Fairborn High School. But despite her young age, Becky embraced motherhood fiercely, according to Justin, and never looked back.

“She loved Jay so much,” Justin said. “She found joy and wonder in Jay every day, the good days and the bad.”

After Justin and Becky graduated from high school, the family moved to Columbus, where Justin studied at the Columbus College of Art and Design. With a young family to support, he studied graphic design as a practical career path, and after graduation was immediately hired at a design firm. A graphic designer during the day, Justin spent his evenings at his first love, throwing pots.

And after a year and a half he found himself dreading going in to his job each day. To his surprise, his wife supported him in his desire to become a full-time artist.

“I know so many more talented people than me who are tending bar because they didn’t have the support I have,” he said.

So at a Yellow Springs Street Fair the couple set up a card table with Justin’s pottery, with a crib holding Jay close by. And to their surprise, the pots sold well. And so they jumped into the physically demanding and financially insecure but far more satisfying world of making a living doing what they loved.

And Becky made it all happen, her husband says. She worked behind the scenes, doing the paperwork, paying the bills, raising their son, organizing trips to art fairs so that Justin could work in the studio behind their home, where they moved in 1996. And though they were never destitute, it was often a hard life. It was clear that in choosing to live as artists they’d given up forever their claim on expensive cars, nice shoes and the finer things in life.

“Becky could have said, ‘I want to be more comfortable,’” Justin said. But she never did. “She thought it was awesome.”

Perhaps Becky found her life awesome because she was so proud of her family, her friend Brooke Bryan wrote this week.

“She would just beam when she showed off Justin or Jay’s latest work,” Bryan wrote. “Her favorite stories included how Justin wrangled up the emotional fortitude to take a jack hammer to his kiln as he moved to new work in ceramics, demolishing the family’s single source of income in hopes of breaking into something bigger. She was proud that they put everything on the line and, I think, reinvested herself in the family business so as to support Justin’s even greater success.”

Jay remembers both his dad and his mom as the role models for the life he has chosen as well, that of a full-time artist.

“I grew up going to art shows with my parents,” he said. “I saw the way my mom loved it.”

Becky always encouraged his art, Jay said, even at its most outlandish. For instance, when he was a teenager and wanted to bury a bike in their backyard for an art project, she didn’t blink.

“There’s still a bike buried in our backyard because she told me I could,” Jay said.

Brooke Bryan remembers a time when Jay called his mom to say he was bored.

“She told him there was a new sharpie on the counter and that he should add some art to the walls,” Bryan wrote. “From that day forward the pen drawings that flanked a doorway of their home were a conversation piece — she never doubted for a second that he would do something amazing with that sharpie.”

All in all, according to Justin, Becky’s first priority was doing whatever she needed to do to help her husband and son pursue their passion for art.

“Her life’s work was giving Jay and I the help and hard work that we each needed to be an artist,” he said.

But Becky had plenty of love left over for the rest of the world as well. Along with the care she showered on family and friends, in recent years she began rescuing dogs. Last week her devotion to dogs in need was illustrated when a visitor to the Teilhet home was greeted by Little Bit, an exuberant pit bull mix puppy. But Little Bit was almost dead when Becky met him, after being rescued from the cage where he’d spent his young life. When found, he was skinny, lethargic, bad smelling and frightened of humans, with seeping wounds, a hacking cough and hairless skin from the worst case of mange the vet had ever encountered, Justin said. But regardless, Becky put him in a car and brought him home.

“He was one big nasty scab that was going to be put down,” Justin said.

Becky made little T-shirts for the dog to protect his tender skin, gave him eight kinds of medicine by hand, spoon-fed him a special diet and dished out massive amounts of TLC. Now, Little Bit is a wriggling, happy guy who adores being touched.

The love Becky shone on Little Bit was the same love she shone on family and friends. And Justin wants to do what he can to share Becky’s story, so that others can carry on sharing that love.

“I want to make sure the seeds she planted continue to grow so that her life continues to mean something,” he said.

“She was that person in your circle of friends who had a way of helping you realize what was special about yourself, when all you were trying to do was be near her specialness,” Brooke Bryan wrote. “She brought light and levity to everything she was near. I swear flowers stood taller in her presence.”

Those who wish to make donations to honor Becky may do so at the no-kill animal shelter of their choice, according to Justin, or they may write checks to Jay Teilhet to help him continue his education.