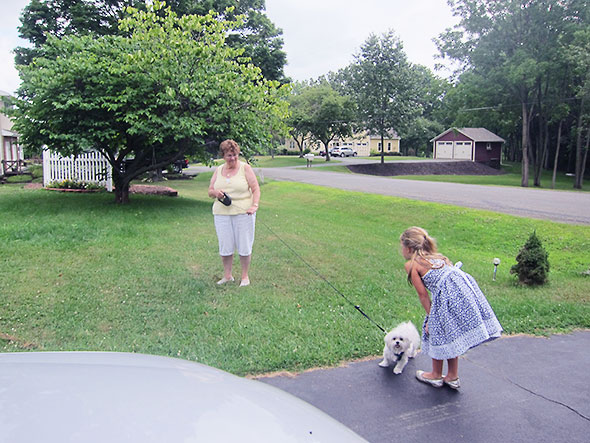 Our daughter has had a busy summer of day camps, swim team, play practice, and reading programs. She got a break from all that this past week when her grandparents Sandra and David invited her to spend a few summer days at their house. Keen for a visit with my people, we drove to Tioga County—the most sparely populated county in New York State—to spend the weekend in my hometown and to situate our oldest child for an extended 7-day stay. 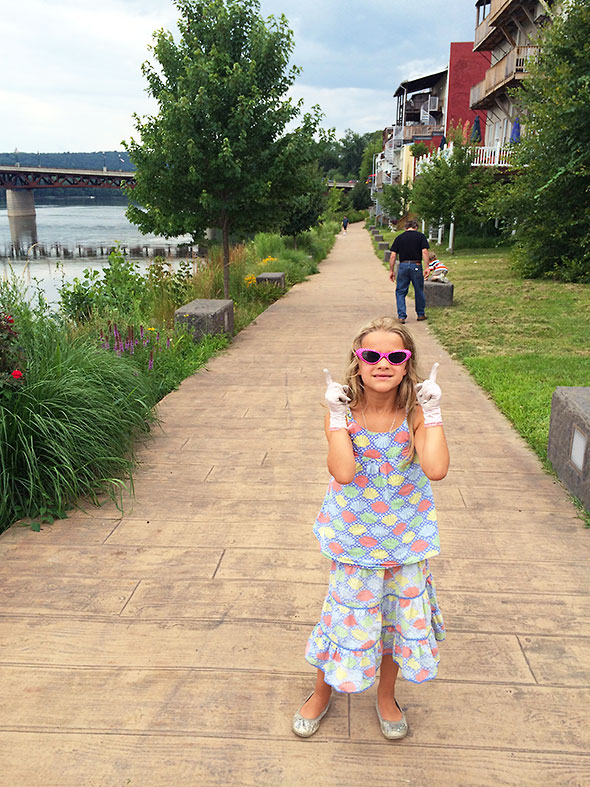 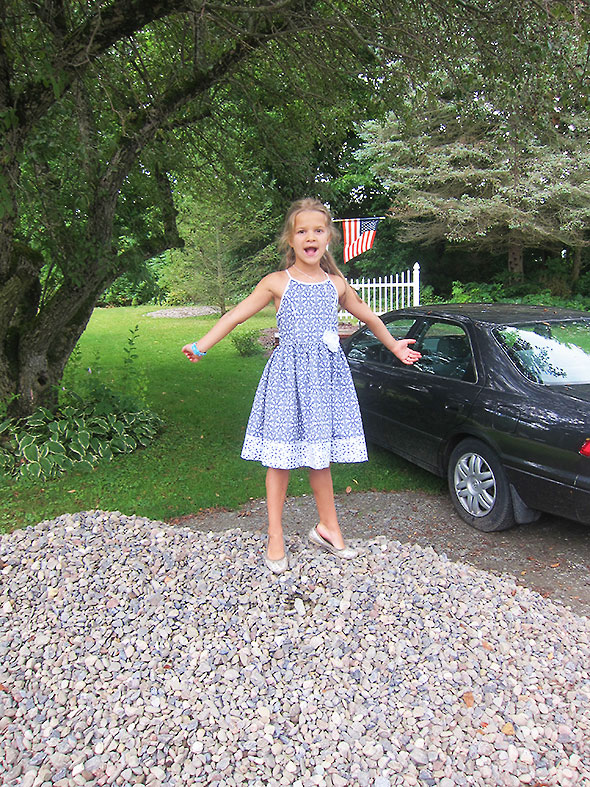 Our daughter was intent on being a fabulous guest. She would play the part with confidence and dress for it too. Along with her favorite dresses, she packed dreamy drapy scarves, a pair of lace fringed gloves, and pink polka dotted sunglasses. One thing that wasn’t packed was her nubby pink afghan. The omission was not intentional. Croqueted in rosette strips by her Auntie Leigh, the afghan serves her in many capacities: a shawl, a head scarf, a picnic blanket, a makeshift purse. It has been her constant companion since birth and a great source of comfort. We discovered its absence just before Columbus Ohio, but she surprised us by agreeing that we had gone too far to turn back and retrieve it. Instead, she and I settled that I should speed the time of their separation repairing its few unraveling cords. They would be reunited again—tested and made whole—in a week. 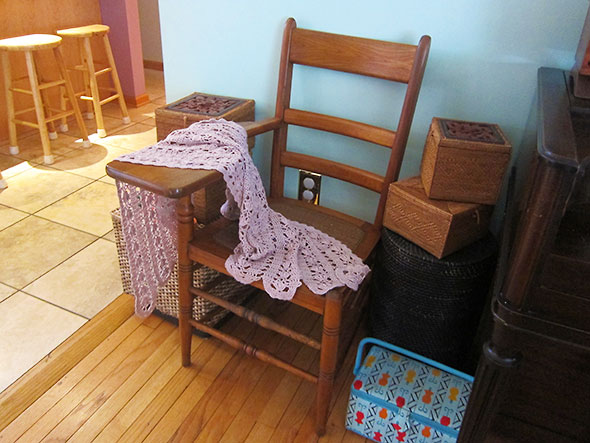 While in New York, our daughter dedicated herself to living up to the name of the bed and breakfast where we spent our first night, The Elegant Lady. After a breakfast of eggs, sausage, local cantaloupe, and a cobbler of blackberries collected from the B&B back lot, our daughter remained rapt following the proprietor Barbara Koehn through the tour of the beautiful Queen Anne home. Barb detailed the restoration work that she performed—the cherry and walnut woodwork, the ornamental plaster molding, the collection of the antique furnishing. Together, proprietor and guest lingered over the vintage prints of victorian ladies. They discussed the history of the 1890’s home, its escape from the worst of the 2009 flood, and the lives of the first residents. 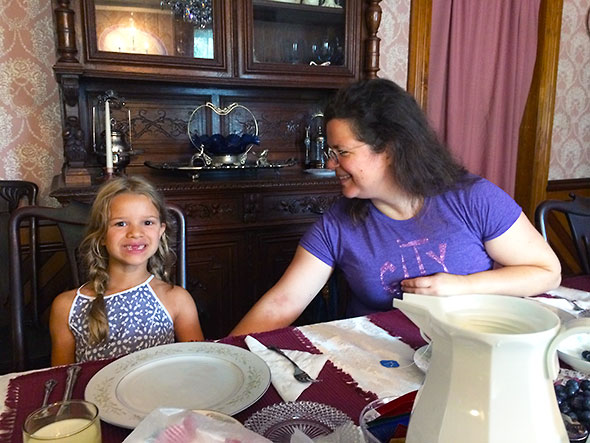 As our daughter transitioned to her grandparent’s house, she practiced a certain way of holding herself gliding from room to room. She took my mother on a tour of her own house and remarked on the similarities to the ranch-style Yellow Springs home that our daughter knows best. She cast her lot in with her new crew making her assigned bed and caring for her grandparent’s sweet dog as if Gracie were her own pet. Poised to be helpful and interested, our young woman firmly planted her flag in her host nation. As we readied to leave, she was reveling in her new responsibilities and surroundings. We tuned out our lingering pangs of worry and set sail to Ohio without her. 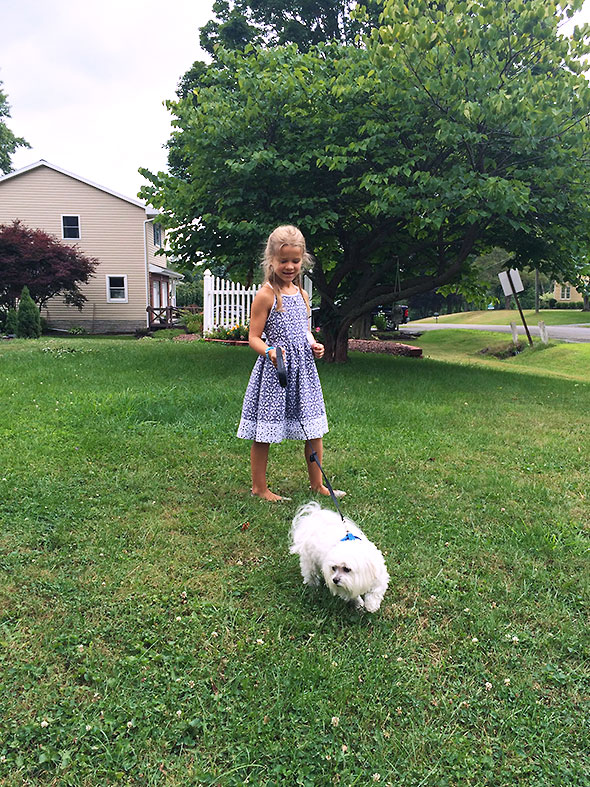 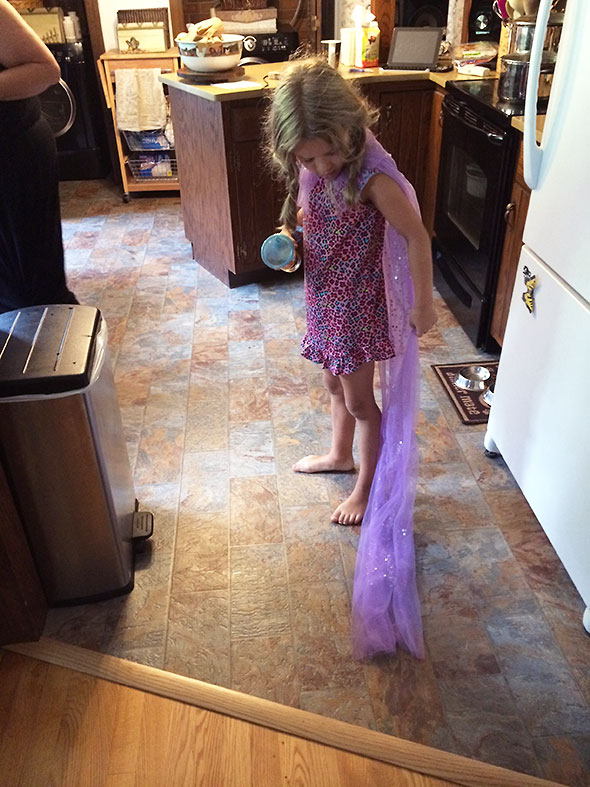 Back in Yellow Springs, we enjoyed a quiet week. The family soundtrack was noticeably less cinematic without our young diva. Like any other seven year olds, our daughter is likely to be singing the soundtrack to Frozen; her repertoire also includes hits from the 1980s, cartoon themes, and the opening number to Superhuman Happiness. 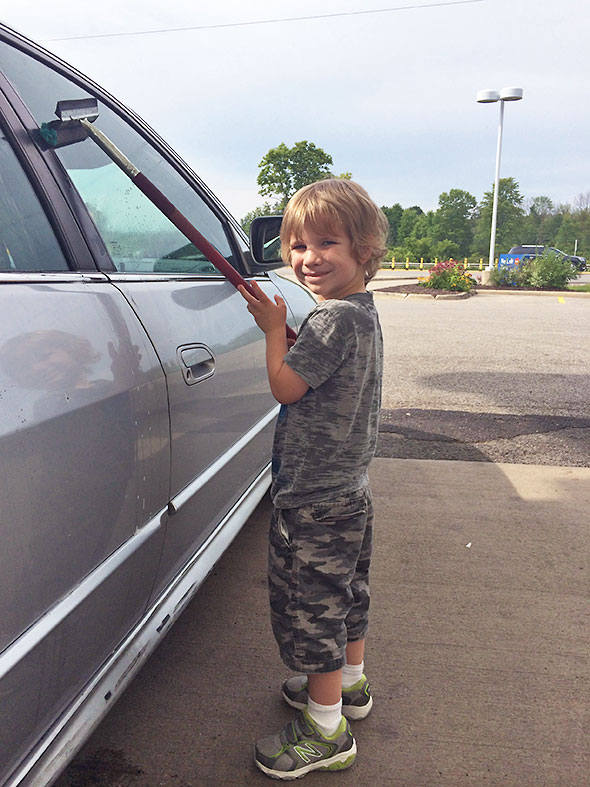 In her absence, our son took over her self appointed chores—such as cleaning Daddy’s car windows—and filled the silence with his own chirping voice. On occasion, he teased us with a full throttle rendering of Queen Elsa’s theme “Let It Go” but mostly he’d croon his personal favorites—Sweet Dreams Are Made of These, Karma Chameleon, and Proud Mary—while playing with his trucks and other toys.

He made his own strides toward independent expression also. Taking cues from his parents’ eager morning routines rather than his sister’s reluctant one, he started pick out his own clothes for the day and dressing himself. It’s a substantial milestone especially as he appears to have a natural ability to match clothes according to theme and color. Yesterday, he did get confused by the texture of a denim shirt—no, dear, that is not a pair of jeans—but his clash-free choices seem welcome evidence against color-blindness.

The supply lists for Mills Lawn School earlier posted early this week, so my young man accompanied me about the town as I collect back to school items. First we went to Unfinished Creations, 243 Xenia Avenue, where we conferred with owner Pam Hogarty. Pam collected our stock of pencils, glue sticks, markers, crayons, erasure, and bound notebook and tempted us further with her inventory of stickers, paints, and pencil sharpeners. My son then took an active role at Tom’s Market checking out our remaining school supplies—disinfectant wipes, tissue boxes, and ziplock bags—even so far as scanning items in himself. 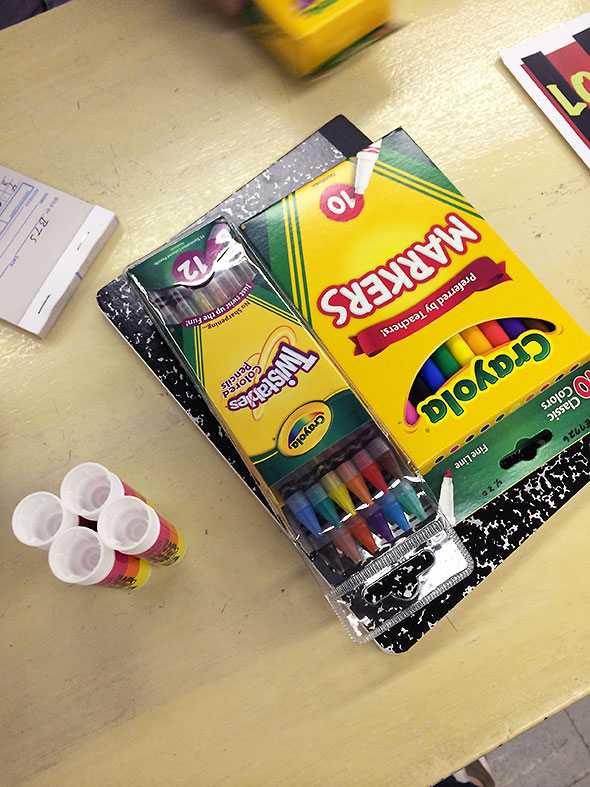 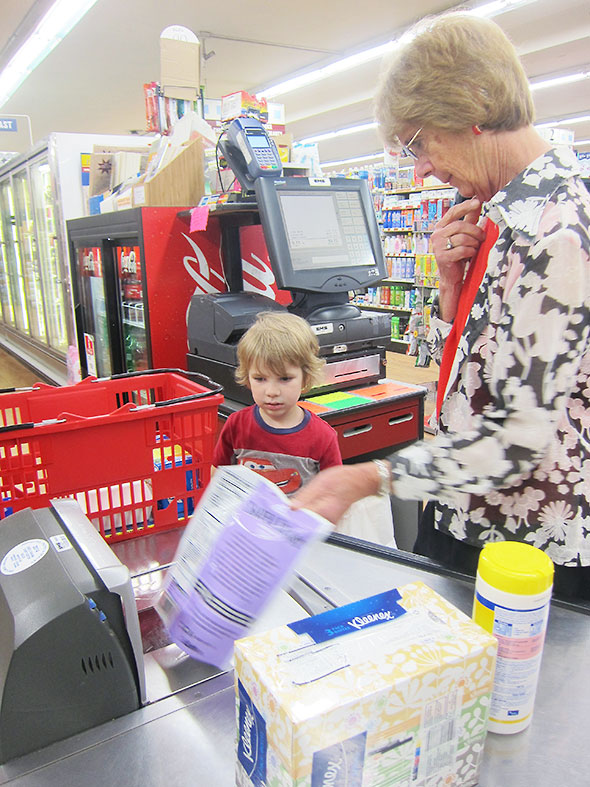 Our family reunited late on Friday night. David and Sandra met us half way in Erie PA. We spent Saturday morning exchanging stories about the children over the week. My mother recounted her pleasure witnessing my daughter’s diligence at wrapping birthday presents for her cousin. Our daughter returned to our fold looking radiant. She sported that glow one gets from a new dress and a relaxing vacation. After our breakfast powwow, I reunited my elegant young lady with her trusty pink blanket—its frayed border mended for her—and instantly she melted into a puddle of toddlerness. 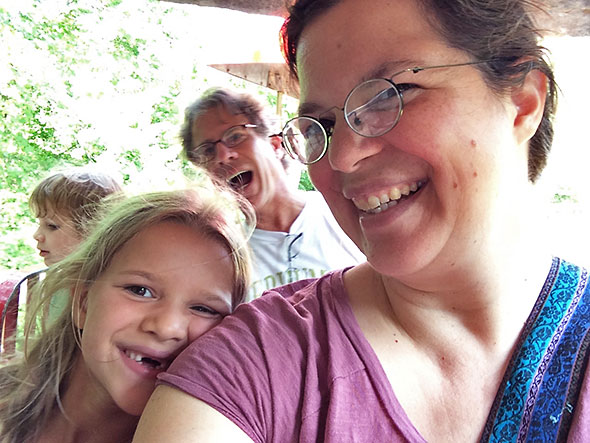 Her sudden regression from independent woman back into cuddly baby surprised me, even disappointed me, though it’s inevitable in a girl so young. The habits of family are strong, and, I tell myself, no matter. My daughter’s flirtations with autonomy say that she has great reserves of confidence. Her self expression will manifest itself as self-reliance soon enough. 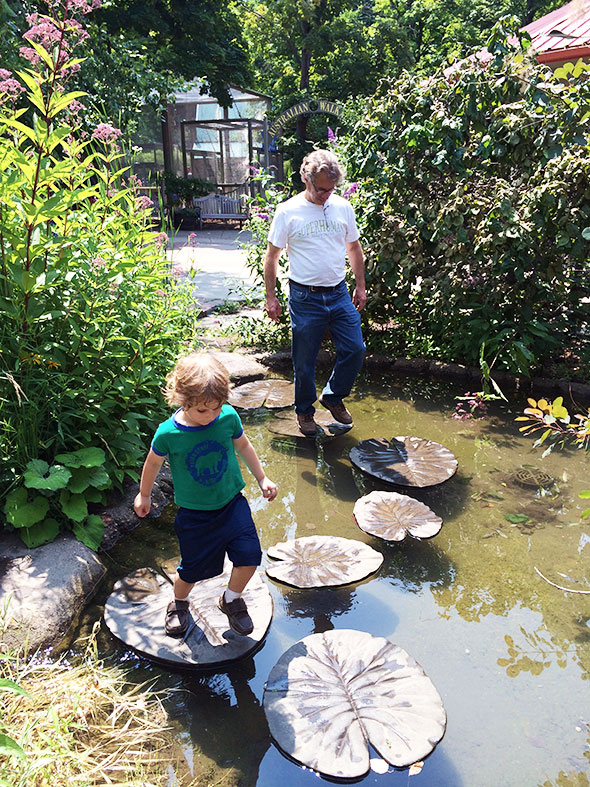 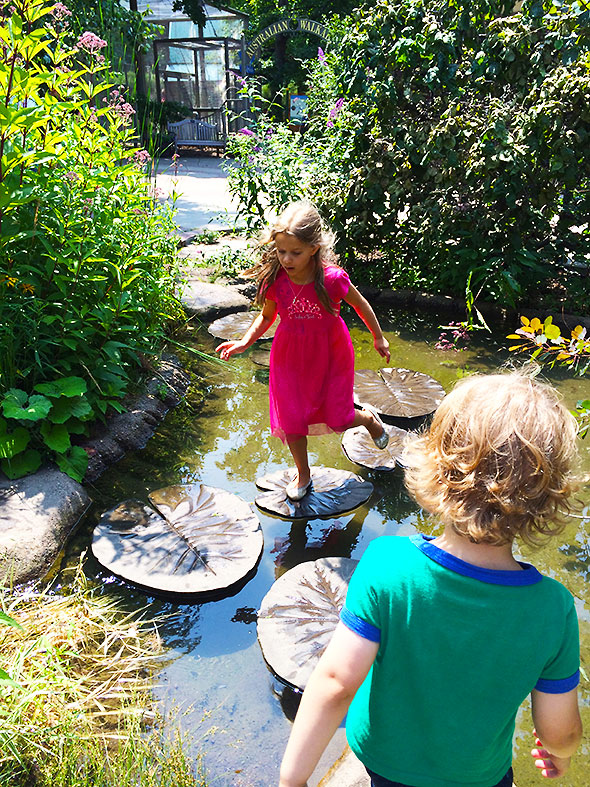 Soon enough she had rallied to her assertive self when we visited the Erie Zoo. She took up the zoo’s map and appointed herself group leader and navigator. We followed her as directed through the zoo discovering its many twists and clever turns. I admit though manipulating the children’s strange gravity toward me…that strong influence Jeremy and I subtly hold over both our children. I won’t regret just yet our daughter’s instincts are to keep close and even clinging. I may strive to raise my children to be independent thinkers and doers but there is still a little yet that I want her to take away from me. I have a gift, I sense, that she still seeks.