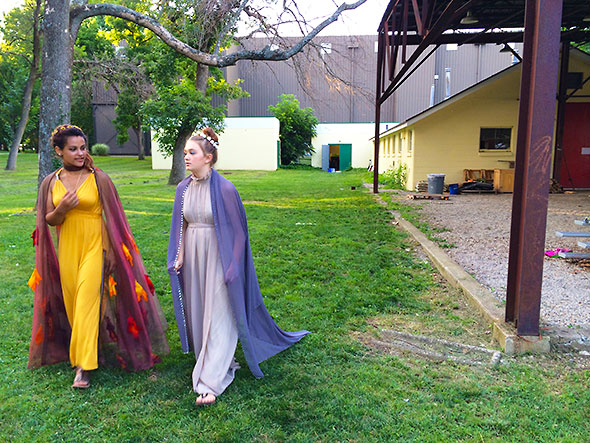 Since returning to Yellow Springs in 2007, my husband and I have attended many plays in the area. The talent on display always knocks us back on our heels. The charm and commanding presence of the actors struck us first, but the multi-dimensional richnesses of the productions deliver their full impact. The nested sets of the Human Race Theater unpack to an astonishing array of palpable scenes. The music and original writing in the village’s many productions weave golden yarns of illumination and reflect the community’s deep commitment to the arts.

Among the excellent fare, the original works of the Yellow Springs Kids Playhouse have stood out in particular. The sophisticated direction conjures, sumptuous costumes and props enchant, interesting themes churn. Its directors are unafraid to bewilder young actors and audiences and lead us on exotic, challenging journeys. 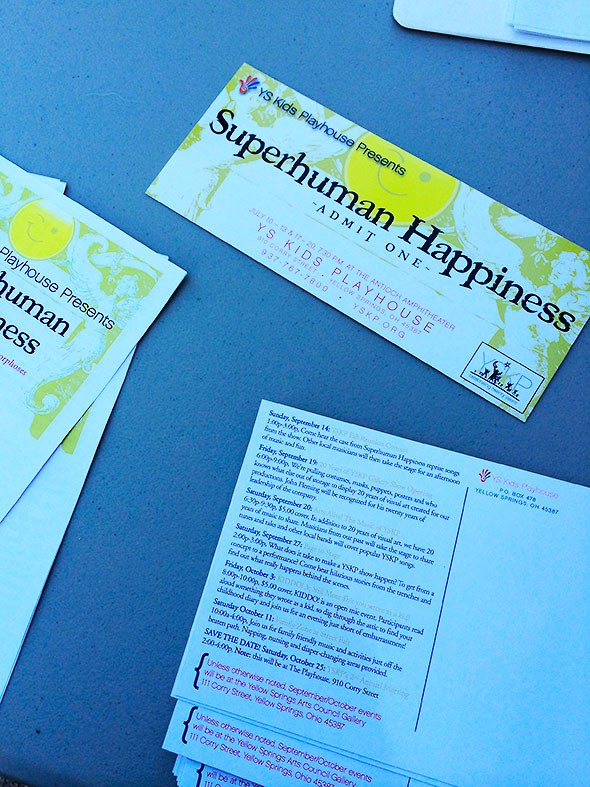 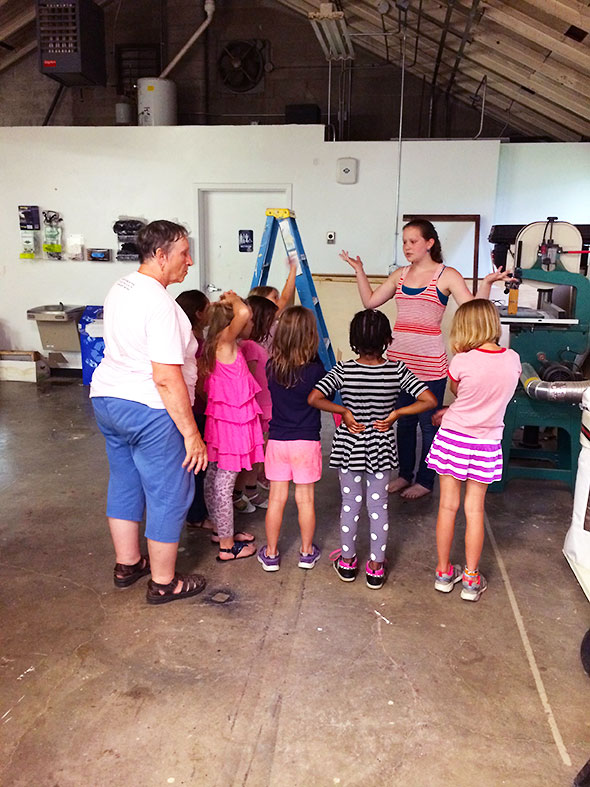 Like many parents in town, I’ve eagerly awaited the day when my first born could join the cast of a summer YSKP production. Getting cast is not a forgone conclusion. My daughter auditioned in May and, for the most part, the poor kid refused the gate. Normally confident and outgoing, she felt out of her depths upon entering the playhouse. Sure, like any small child, she gets shy in strange situations, but we didn’t foresee any problems. The building was familiar to her, and she knew several children trying out. What made her pause, however, were the big kids. They were not tall and terrible, but she had seen them on stage several times by that point, and I rather think that she held them in awe. They seemed to be the only people she saw in the room when she described her hesitancy, and she chose the circle of her father’s sheltering arms over the open circle of children. After an hour of assurances and even bribes, my husband brought the anxious lass to the library where I was tutoring algebra and asked if I could persuade her to effort.

I held her hand as we walked back to playhouse on Antioch College. At the door, we met with friends. A quick conversation and, voilà, that connection was all it took. She walked through the playhouse without pause or protest, kicked off her shoes, and joined the other children for the last hour of the afternoon workshop with John Fleming. I filled out forms with incoming artistic director Ara Beal near the entrance, and we discussed the reduced time commitment offered to the youngest members of this year’s cast. At the end of the workshop, we thanked John for his patience. Walking out, we both sighed over the missed chance and consoled each other that we learned useful things from witnessing the audition process. We resolved to think no more of it until next year.

A week passed and, then, an email arrived in my inbox announcing the cast list. There, at the very bottom of the page, a lost hope flickered to renewed life. She was listed last but she was cast. Our daughter was offered the part of a cricket. 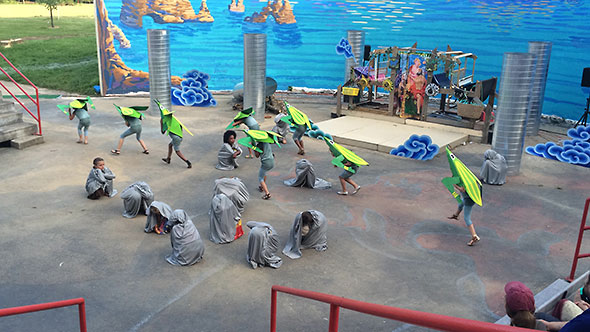 The role of cricket has certain benefits to its youngest cast members and to new families entering into the YSKP circle. This first year, we caught on to pace of rehearsals and performances and set our expectations accordingly. For the first three weeks, our cricket rehearsed only on Saturdays while the full cast practiced up to 6 days a week. Once the performances began, the crickets could leave after the first act, if so inclined, in order to go home to bed. In her entry level role, our daughter could be in three scenes of the play: the opening number, the deluge, and—if she could persist—the finale. 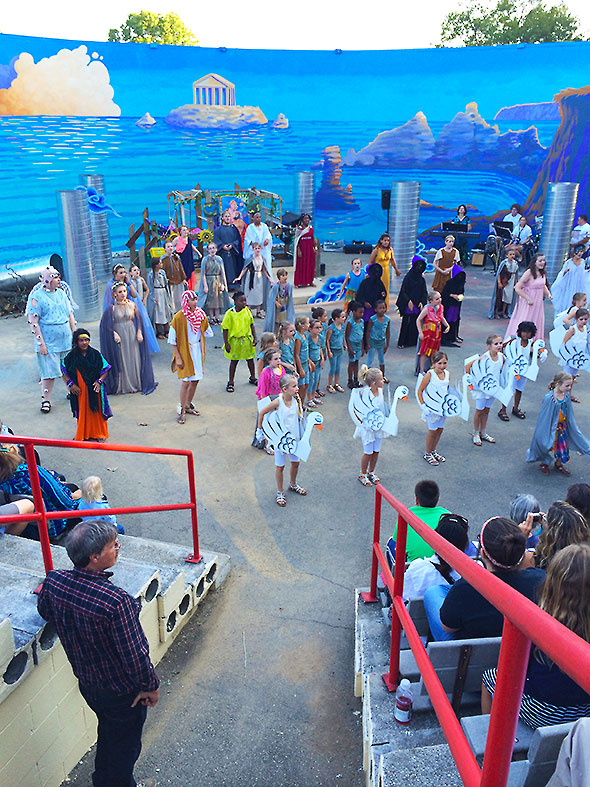 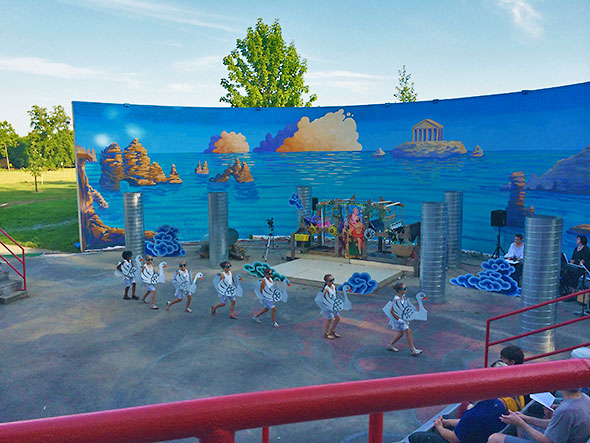 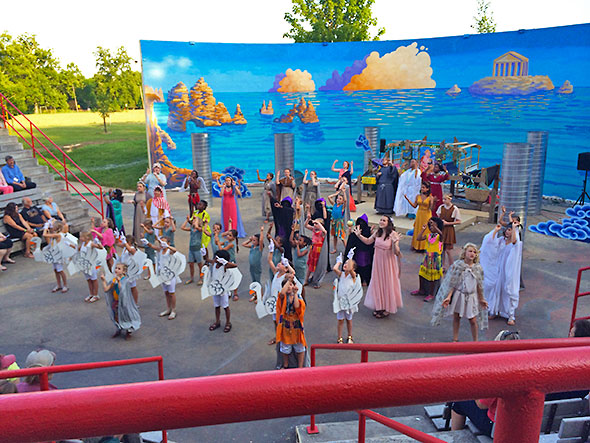 Watching the production come together, we found it increasingly hard to leave at an early hour. This year’s musical recounts Ovid’s stories of metamorphosis. Ovid wrote 250 myths into his epic poem. Superhuman Happiness lashes several of them together into an interlocking pattern. The gods take turns spinning tales and trading barbs with mortal weavers at their loom. The immortals and the human storytellers disapprove of each other. Each faction observes the others’ movements with great skepticism and growing impatience. The Gods are at a clear advantage as the disputes escalate, but fortunately for mortals the Gods don’t like to exert themselves. 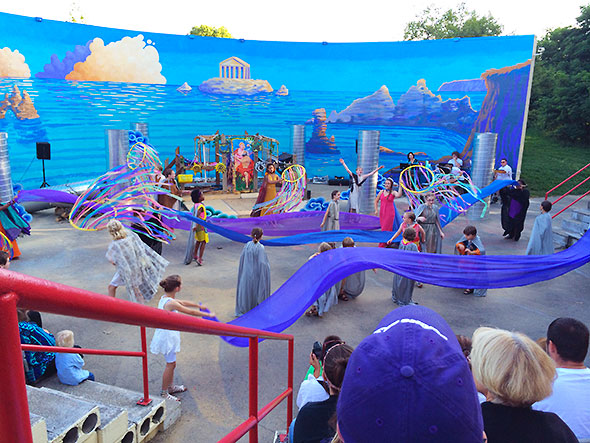 Not the kind to sit idly by, the mortals of our play transport us to a Mediterranean shoreline overlooking proud Olympus. The seascape is a masterwork painted by local artists Pierre Nagley and Travis Hotaling. The back drop became an attraction itself and, between calls, we would slip into the theater to check on its progress. I looked for other openings to make my artistic mark. The Saturday before the play’s opening, I jumped at the opportunity to hunt down missing items for the prop table. I trimmed five large limbs from a gnarled overgrown tree in our side yard. The twisted branches turn a sweet young girl into a tree after she rejects the amorous advances Jove’s son. Among the props, I found other hints of my humble offering—a golden staff here, a magical flute there—formed from the same curious branches. The prop table illustrates the expansive ground that Ovid’s myths cover: how the seasons formed, who invented music, how peacocks and spiders came to be.

The opening song lists the four ages of the civilized world…gold, silver, bronze, iron…and heralds the opening of the last age where mortals and gods have sunk into wickedness and oppression. Jove has lost patient with the chaos of the age and, blaming impatient mortals, sends a flood to scour the earth clean of the pestilence that is man. Little green crickets emerge first after the devastating waters recede. My own cricket tarries to tap gray husks that once were people and tease the nymphal form within. 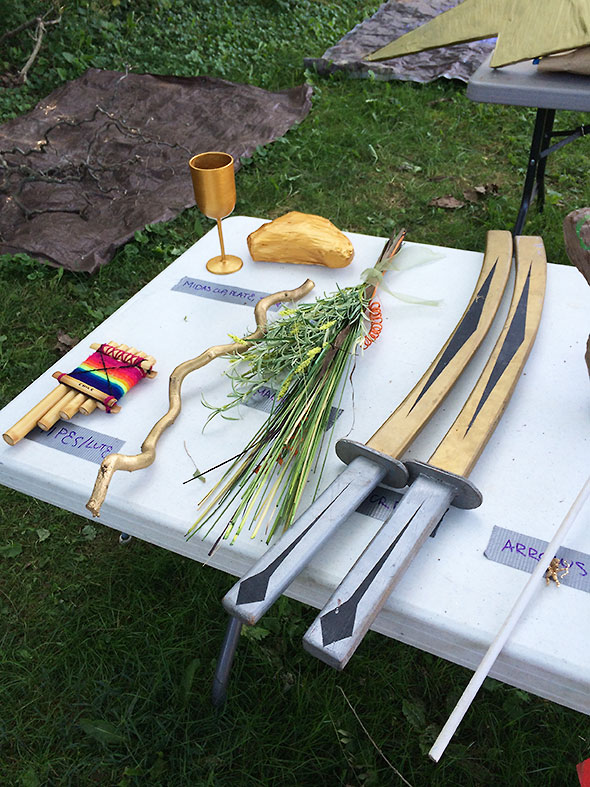 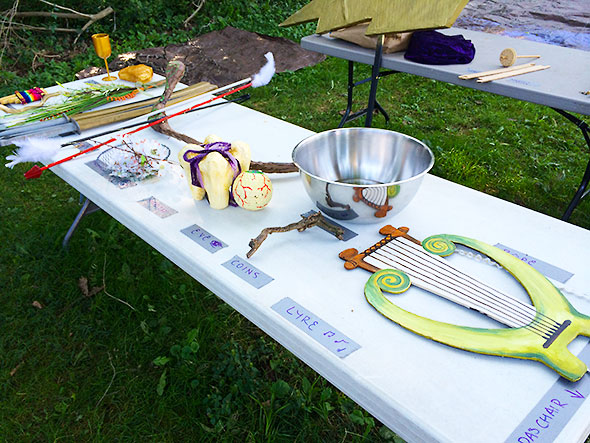 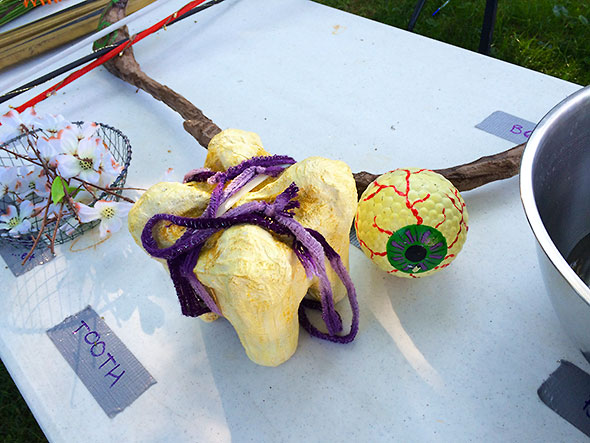 A benevolent force restores the humans after the flood, but their troubles have just begun. The Gods continue their petty wars among each other and their children. Disasters fall on all: some emerge transformed to carry on a new life; others are drawn in by the dark flirtatious charisma of the underlord Pluto and spirited away to his domain. Witnessing the production in its disjointed form that rehearsals demand, I felt like a cricket myself ticking around the outer edges—confused and curious—as the work metamorphosed over June and July. 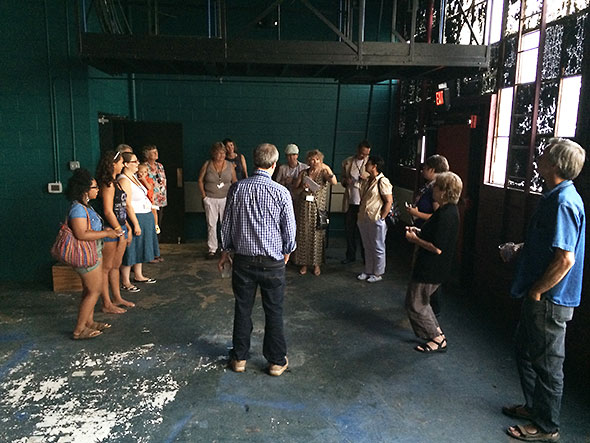 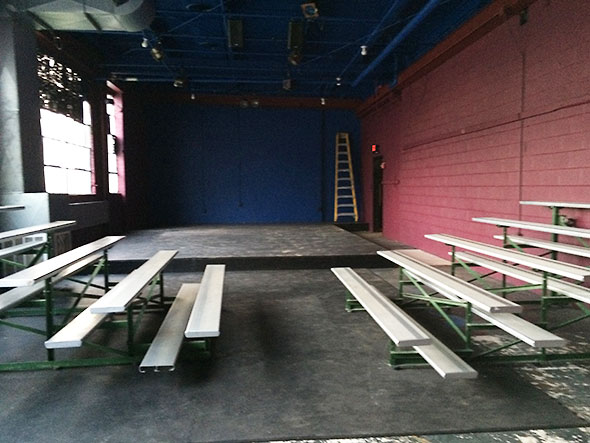 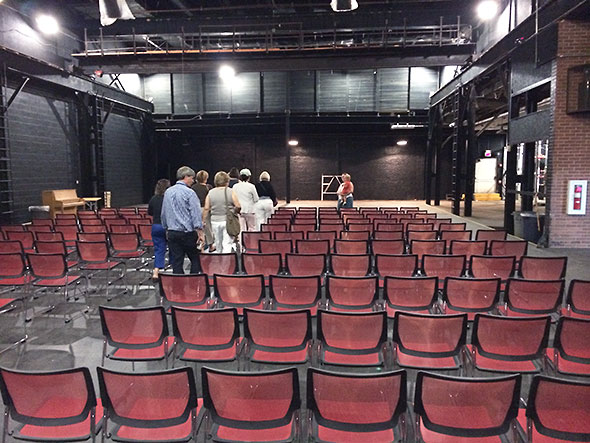 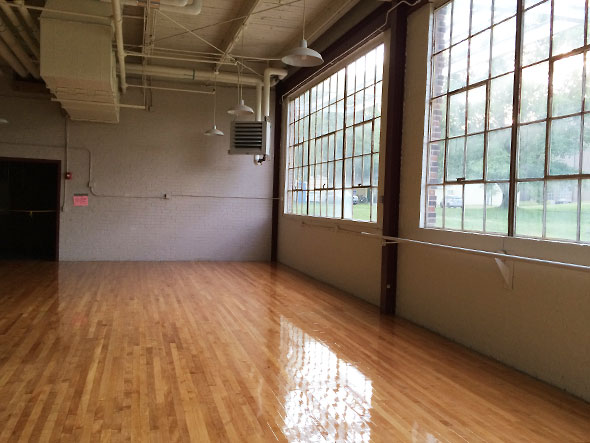 Next door, another impressive metamorphosis nears completion. As dress rehearsal played out at the amphitheater stage, I tagged along on a tour of the Antioch College theater building and its recent renovations. The newly polished sprung floor of the dance studio gleams like it’s been touched by King Midas. The blessings of a new roof and HVAC system bestow comfort year round and the theater long treasured for its flexible space will soon open to many opportunities for the school and community. 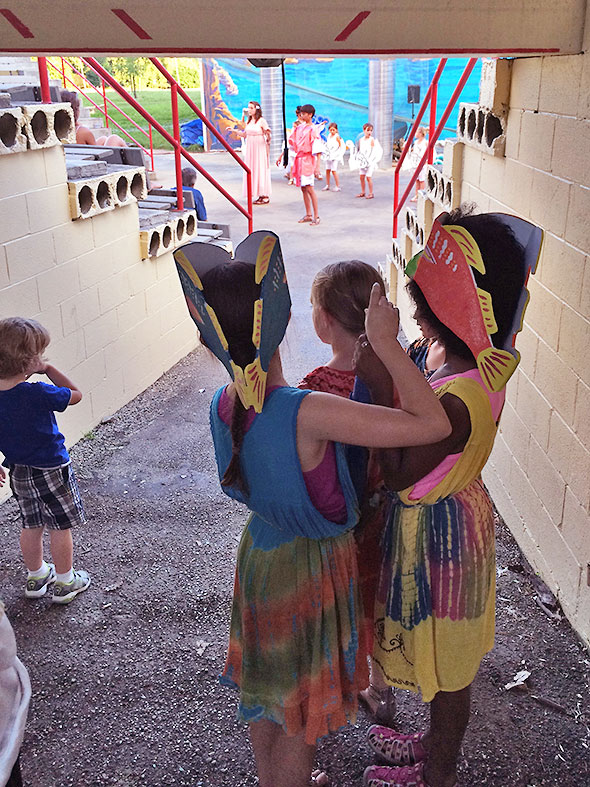 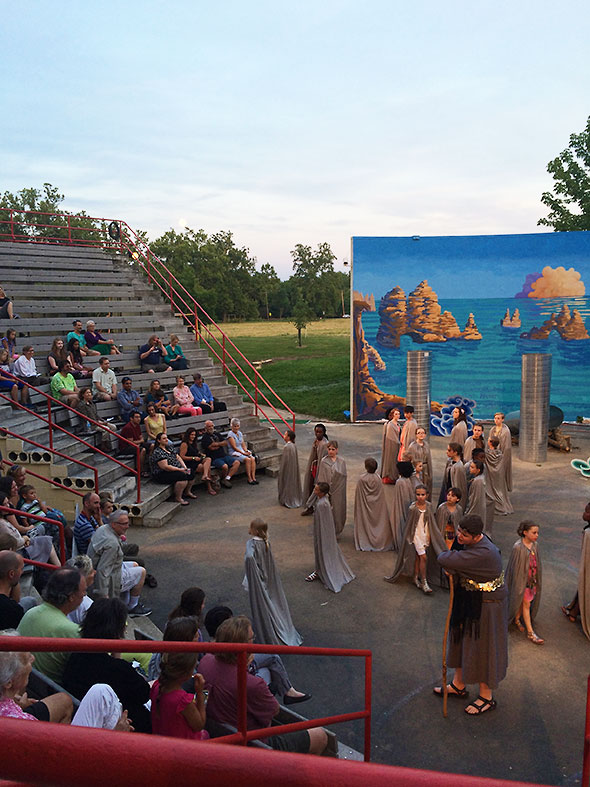 These opportunities will surely impact the Yellow Springs Kids Playhouse, and I foresee for the better. The YSKP is completing a metamorphosis of its own as John Fleming steps down as artistic director and the capable Ara Beal takes his place. A series of events this fall will celebrate the twenty years of YSKP triumphs and pay tribute to Fleming’s wide resonating influence, artistic and organizational vision, and creative genius. 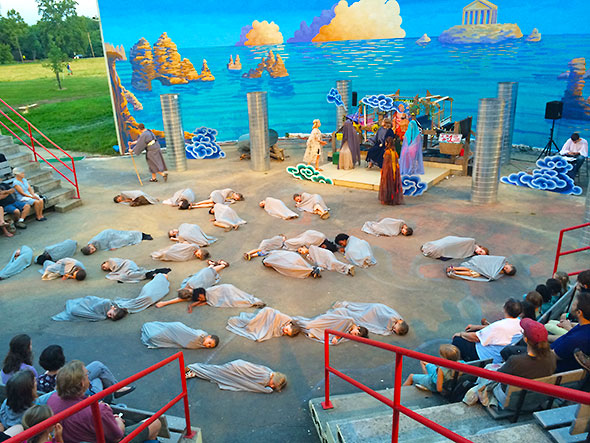 As Fate tells us, “Happiness lies between too little and too much”. We might be forgiven for hoping at this juncture to error on the side of too much, but the threads of Fleming’s influence are tight-woven into this community. The success of the playhouse he founded will never be in doubt. Guided by a love stronger than that of fickle gods and vain people, we will tend to the magical weave he first conceived and raise a long waving banner proclaiming truth, empowerment, and transmogrifying delight.