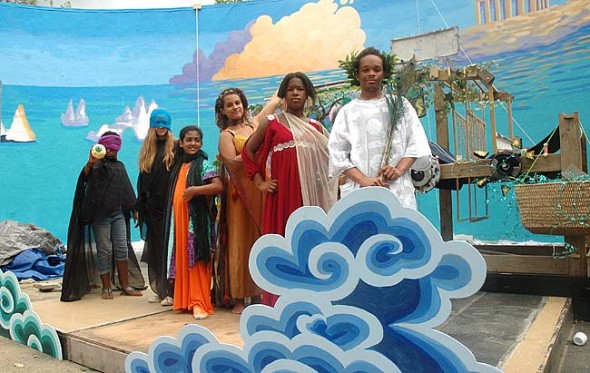 Everything changes, nothing perishes.

The theme of transformation in “Superhuman Happiness“ is quite literal —a human becomes a screech owl in one story — and is fitting for a show performed by ever-changing youth and for a nonprofit organization getting a leadership change.

“The deeper meaning is the idea of fluidity and adaption as a life skill, and being able to change as they go through life,” the show’s director and playwright John Fleming said of the lesson for child actors.

Meanwhile, Fleming, who founded YSKP in 1995 and is stepping down as executive director after this summer’s show, can relate.

“I’m going through this big transformation too,” said Fleming, whose successor, Ara Beal, is producing the show.

Written some 2,000 years ago, “Metamorphoses” is a massive Latin narrative poem that spans 15 books and more than 250 myths. Fleming’s adaptation includes several of its most famous myths, including the story of Persephone’s abduction by Pluto into the underworld and the fated love story between Echo and Narcissus, which ends with one doomed to repeat for eternity and other falling in love with his own reflection.

The central story of “Superhuman Happiness” pits goddess of wisdom Minerva against master weaver Arachne, who competitively “weave” vignettes about the travails of the gods in an attempt to prove whether the gods cause humans more harm or good.

“Arachne is trying to convince audience members that all gods do is cause mischief and break hearts,” explained 17-year-old Chekinah Williams, who plays Ceres, the grief stricken mother of Persephone. In Ovid’s myth, Arachne is ultimately transformed into a spider, her descendants condemned to weave for all eternity. As for “Superhuman Happiness,” “You have to come see who wins,” Williams said.

Other characters from “Metamorphoses” making an appearance are Jove, the King of the Gods, and his warlike wife Juno, Io, a girl who becomes a cow, the mischievous Cupid, the quick messenger Mercury, the goddess of agriculture Ceres and music spirit Pan, among others. In addition Fleming created new chorus characters in the Weavers, Swans and Crickets, a giant python and the Grey People, inhabitants of the underworld. There are 49 youths from 5 to 17 years old participating in this year’s production.

Completing the fantastical look and sound of “Superhuman Happiness” are two YSKP visiting artists, along with two local muralists who turned the amphitheater into the celestial home of gods and goddess. In the words of Fleming, “everything clicked aesthetically.”

Visiting artist Curtis Goldstein, a Columbus-based visual artist who was in residence at Antioch College last school year, created dramatic set pieces and props made almost entirely from recycled materials. There’s a mythic painting on a shower curtain, papier-mâché clouds covered in filling from old pillows, a giant owl made from a rake, a spider’s web from bird netting, jellyfish made from old plastic grocery bags, and a massive loom center stage.

Goldstein said his approach (known as bricolage) fit perfectly with the show’s theme of transformation.

“I believe in the metamorphosis of materials — the reanimation of things,” Goldstein said.

Goldstein’s work dovetails perfectly with that of visiting artist, Ellen Maddow, the show’s composer and musical director. An Antioch alumna based in New York City, Maddow likes to incorporate musical instruments crafted from found materials, and has vast experience creating work for different cultures as a founding member of the 1960s developmental theater company, The Talking Band, Fleming said. For this show, Maddow is using as percussion instruments old water bottles and rusty water pipes salvaged from the Antioch Theater building undergoing renovation next door.

Other local artists participating are Migiwa Orimo, who is creating a set piece; musicians Barbara Leeds, Brian Mayer and Meredith Rowe; and muralists Pierre Nagley and Travis Hotaling, who painted an ethereal scene of sky and sea featuring a Roman temple on the 80-foot long amphitheater backdrop.

Fleming, who has written several other original scripts for YSKP, came upon the idea for “Superhuman Happiness” while reading on a beach vacation Ovid’s “Metamorphoses” — not an easy beach read.

“While I was looking out at the clouds and sky in the beach light, I started thinking about how people used to believe there was all this action coming out of the sky,” Fleming said.

Fleming was taken with Ovid’s influential fantastical elements, which inspired later authors and playwrights like Dante and Shakespeare. Fleming also saw value in introducing the world of ancient myth to youths who can’t imagine a world where people don’t text and are shocked to find out that they didn’t have television in Ovid’s time, he added. And Fleming knew that it wouldn’t be a stretch for today’s youth to believe in shapeshifting in a culture saturated in video games and fantasy films.

“In the post-video world, kids growing up today don’t have a problem with someone starting as a human and finishing as a wolf,” Fleming said.
Fleming drew from many more modern sources in writing the play: a six-hour Wagner opera, the Game of Thrones TV series, the Hunger Games films, and the juvenile picture book “Shapeshifters.”

Among the benefits of YSKP shows is the support of local artists in Yellow Springs, according to “Superhuman Happiness” producer and incoming YSKP executive director Ara Beal. Most of the show’s $30,000 budget will pay artists who provide lights, music, sound effects, visual arts, props, costumes and more, Beal said.

YSKP teaches local youth “how to tell a story through the elements of theater,” as Fleming puts it. As in years past, the young cast and crewmembers of “Superhuman Happiness” are taking ownership over the show in the collaborative, creative tradition of YSKP, Beal said. Among other opportunities to chime in on the show, youth can share their thoughts at weekly meetings that Fleming hosts, which are critical in original theater, according to Beal.