August is a month that holds two important anniversaries for me: On Aug. 1, 2009, I quit the state of Kentucky and moved to Yellow Springs, becoming over the course of a two-and-a-half hour drive the only member of my extended family to put down roots north of the Mason Dixon line. A bit more than a year later, on Aug. 17, 2010, I gave birth to my daughter, Lucy, a process which took a good deal more than 2.5 hours. Over the last few weeks, to mark the fourth anniversary of the day I spent in terrible agony in front of helpful, scrub-clad strangers (or, as Lucy might prefer to think of it, her fourth birthday), my husband, daughter and I enjoyed a trip down to Florida to visit my family. While there, we showered young Lucy with birthday gifts and sweets until she collapsed in a doze borne of over-consumption — even though, and I can’t stress this enough, she really did not do much of the work involved in getting herself born. 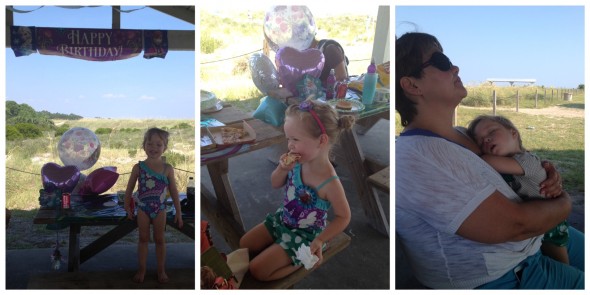 Go ahead, take all the credit.

Having returned from our sojourn down south, it occurs to me now that the month of August once again ushers our cozy family unit into new territory, as Lucy begins preschool next week. Up to this point in my life in Yellow Springs, the summer months have really only distinguished themselves from the rest of the year in that the public pool is open and the News closes early on Fridays. Now that school is about to enter our lives, August will become for us, as it becomes for so many parents, the beginning of the time of year when our kid is out of our immediate radar for hours at a time, for most of the days of the week.

As part of the process of getting ready to send Lucy to school, I found myself completing a long series of forms, which asked me many questions about my daughter, in order to acquaint the school staff with her general demeanor before meeting her. There were the obvious questions, pertaining to food allergies, necessary medications and ability to independently urinate in an appropriate receptacle. This was all information I had expected and was ready to deliver. There were other questions included on the paperwork, however, which I had honestly never contemplated in any intentional way.

For example, what scares her? A few things, some of which make very little sense to me, such as the DVD player. Blow dryers. Fans, both ceiling and portable. Sudden, loud noises, which I can understand. The cookie jar in the living room that looks like C-3PO from Star Wars, which I can also kind of understand.

What is her pre-bedtime routine? Well, it starts with her fervent declaration that it is definitely not bedtime. Then, when it’s clear that nobody else in the house shares this opinion, we move on to the careful selection of bedtime attire and the brushing of the teeth. This is followed by a long, perhaps unnecessarily long, trip to the bathroom, for which she proclaims that she needs to be alone (this is, perhaps, my fault, as she clearly learned it from watching me). Then we start wrapping things up with the reading of a story, which she is careful to choose only after a protracted period of deliberation. After this, she invariably pulls up the back of her shirt and demands a “massage,” all the while asking for “another song, okay one more song, now just ten more songs.”

This is the only time of day she lets me hold her anymore; she began wriggling restlessly out of her baby sling around 8 months, and started running off to do her own thing as soon as she figured out how to run. Since then, I’ve caught my hugs and cuddles when I can. Some nights I sit with her in my lap in the rocking chair and sing until we both fall asleep.

I caught myself once or twice while filling out the paperwork, thinking perhaps I was offering a bit too much information. But none of what I’d written was really the whole story, anyway. Writing about her fears, her routines, her typical moods caused me to think deeply about the personality of this small human I’d been given the task of fostering and shaping into personhood in a way I rarely had, but I couldn’t get it all down on a few pages. Like the way she tends to gesture emphatically with the pointing of one finger, or the weird Popeye face she pulls when she’s feeling sassy or incredulous. Then, of course, there’s her frequent donning of what she calls “expedition gloves”: 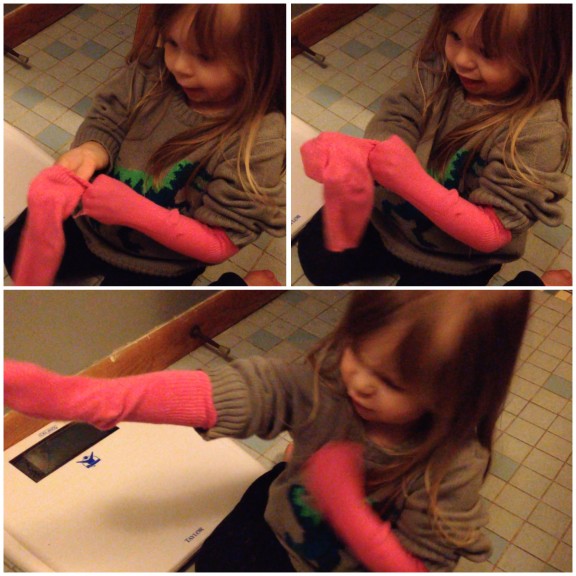 Or, as they are more commonly known, socks.

Yes, I labored just shy of 24 hours to bring her into the world, but outside of feeding her and dressing her and trying to show her how the world works, the real work of being a person is off my shoulders and onto her diminutive ones, and she’s already taken up the burden. My next step, I suppose, is to deliver her into the care of new people, who will guide her in their own ways, and who will discover who she is, just as I have.

But I would be remiss not to warn them about this particular face. Nobody should have to see that without a heads up. 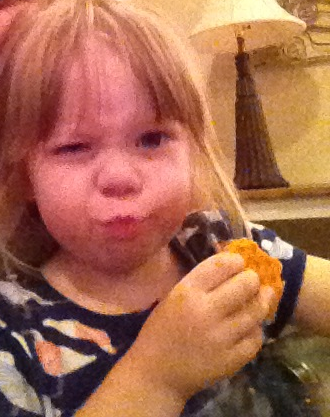