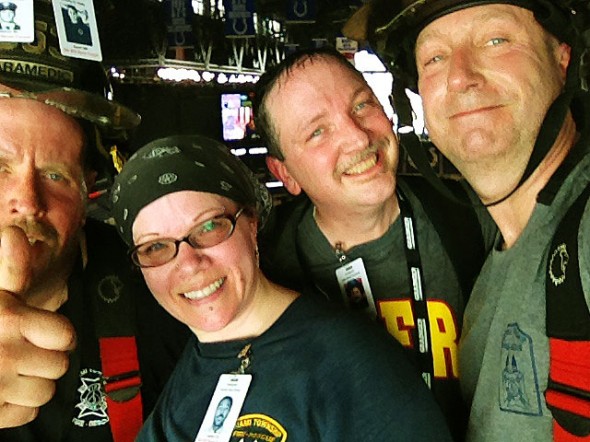 Every year since 2005, a group of 343 fire fighters, the number who died in New York City on Sept. 11, 2001, has climbed 110 flights of stairs, the number of stories in the World Trade Center buildings, to raise money for the families of those who died in the terrorist attack. This 9/11 Memorial Stair Climb event began with a fire crew in Denver and has inspired others like it around the country every year after. This year Miami Township Fire-Rescue will inaugurate the first Memorial stair climb in Yellow Springs (and the only one in Ohio) to be held on Saturday, Sept. 27, at Antioch College’s North Hall Dormitory. The event, along with 35 others nationwide, will raise money for the National Fallen Firefighters Foundation that supports the families of those who have died in the line of duty.

Service members as well as civilians are welcome to participate in the community event.

Fire Chief Colin Altman attended his first 9/11 stair climb in 2013 and was touched by the tragedy and hope it represented. Each participant wears a badge with a photo of a New York Fire Department service member who died while trying to rescue others in the Twin Towers. Some climb in full turn-out gear or carrying air packs and hoses. And the events are capped at 343 participants, a symbolic gesture to the original rescue group.

“The tagline is ‘We climb because they climbed’ — it’s a nice way to recognize not just the fire fire fighters but the police and civilians who died that day,” Altman said.

Residents are encouraged to register early for this year’s Yellow Springs event at http://www.ysstairclimb.com. Participants can also register as a team. The fee is $30 per person, which includes an event t-shirt. Check-in is 7:30–8:50 a.m., followed by a ceremony at 9. The climb starts at 9:15, and the stairwells will be open until noon.

For those who prefer not to climb, Fire-Rescue could also use about 20 volunteers to help coordinate the event. Contact the fire department at 767-7842 to volunteer.