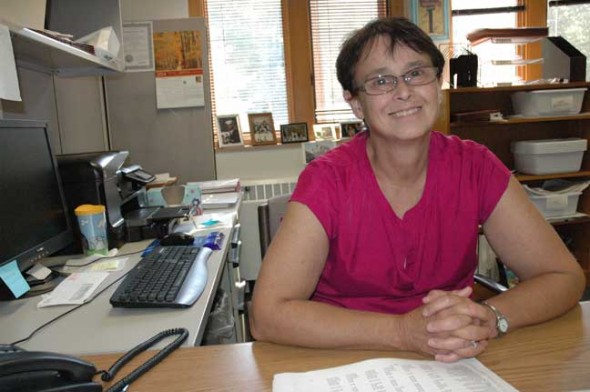 Patti Bates is in her fifth week as the new Yellow Springs Village manager. She and her husband, Mike, are looking for a house in the village, and are thinking of building. (photo by Daine Chiddister)

“Aging infrastructure — these problems are facing everyone, especially small towns,” she said in an interview last week. “And when things go wrong, you have to fix it.”

Aging infrastructure is not new to Bates. She dealt with old pipes and facilities as Village administrator of Williamsburg, Ohio, and they are high on her list of priorities in Yellow Springs. As well as keeping services flowing smoothly to citizens, infrastructure is linked closely to economic development, Bates believes.

“If you’re trying to attract new businesses, you have to have the infrastructure to support them,” she said.

The challenge, she believes, is getting the timing right in replacing old pipes. You don’t want to go in and dig up the ground, causing upheaval for citizens, if the need isn’t great, but you also don’t want to wait too long. So she’s working with Village staff to find the right balance in timing, by thinking ahead about replacement needs.

Bates is also eager to make progress on replacing the aging Village water plant. Council has recently moved closer to replacing the current plant with a new facility that provides softened water, and Bates will soon issue a Request for Qualifications, or RFQ, for an engineering consultant to evaluate costs and effects of four different methods of softening.

Bates likes getting things done. It’s one reason she finds satisfaction as a public administrator.
“I like solving problems,” she said. “And if you can solve problems in the public sector, you impact more people.”

In her fifth week as Village manager, Bates is having a good time. So far, she’s spent most of her time familiarizing herself with current projects, along with getting to know Village crews.
“I’m just trying to understand how things are working,” she said.

She’s very impressed with Village staff, and is looking forward to working collaboratively with department heads Jason Hamby (streets), Johnnie Burns (electricity) and Joe Bates (water). While the ultimate decision on many issues rests with the Village manager, Bates plans to include the staff in the decision-making process.

“The staff has in-depth knowledge,” she said. “They’re too valuable a resource to leave out of the discussion.”

Overall, Bates sees herself as a collaborator. For instance, Yellow Springs is a far more engaged community than was Williamsburg, where citizens rarely attended Council meetings, and she’s looking forward to hearing more public discussion of issues.

“People need to have their say,” she said, stating that she respects the number of villagers who bring various kinds of expertise to Council meetings. And while she wouldn’t be shy about cutting off conversation if it passes the point of helpfulness, “as long as the back-and-forth is still productive, that’s fine.”

Bates rose to the top of 61 candidates who applied for the job of Village manager. While she didn’t know much about Yellow Springs when she first applied, the more she knew, the more she wanted the job.

The three manager finalists spent two days in the village at the end of May, meeting with Village staff, Council and groups of citizens. While the schedule was undeniably tiring, several Council members remarked at the time that Bates seemed the most energized at the end of the process. She agrees.

“I enjoyed it. I really did,” she said of the two-day interview. Wrapping up her final interview with Council members late on the second day, she told them, ‘I’m still having fun.’”

After she got the job, Bates and her husband, Mike, began looking for a house in town, but so far haven’t found one — they may end up building, she said. Her experience looking for a place to live is informing her sense of the many challenges Yellow Springs faces in attracting new business, since companies need places for employees to live.

Stating that, “there are some houses we could afford and some we couldn’t,” Bates said she’d like to see a wider range of housing available in Yellow Springs.

For now, she’s renting an apartment during the week while her husband, Mike, stays in their home in Milford, Ohio, about an hour and 20 minutes away. The couple, who don’t have children, lives with their seven cats, and Mike, who works in the mortgage loan department of the Fifth Third Bank in Cincinnati, has a t-shirt that reads, “Real Men Admit They Love Cats.” However, Bates is quick to add, she personally likes all animals. She also likes baking, hiking and reading, mainly fiction.

Still, she’s not too comfortable talking about herself.

Villagers can come to their own conclusion about that. Bates grew up in Goshen, Ohio, and much of her family still lives in the area. She’s close to her family, which includes two brothers and two sisters, and spends each Saturday morning cleaning the home of her 84-year-old father in Goshen, then shopping for his groceries.

“I’m the over-achieving middle child,” Bates said with a smile.

In college Bates studied forestry with an emphasis on recreation, thinking she’d like to work in a natural area. But that was during the Reagan years and the federal government wasn’t hiring, so she ended up as a groundskeeper at a community college. Next, she spent 12 years as a police dispatcher, while getting a masters in public administration at night from Northern Kentucky University. Bates then worked for seven years as head administrator at the Kenton County Detention Center before moving on to become the village administrator at Williamsburg, a job she also kept for seven years.

Although working as head of a detention center might seem a long way from managing a village, Bates says the two jobs are similar.

“Really, a detention center is a little city,” she said, one that supplies a variety of services to those who live there, and a village, of course, is the same.

Bates aims to do her part in making sure that services keep working in Yellow Springs, which she is happy to call her new home.

“I just like it,” she said of the village. “Yellow Springs is a unique community. You want to keep it that way.”