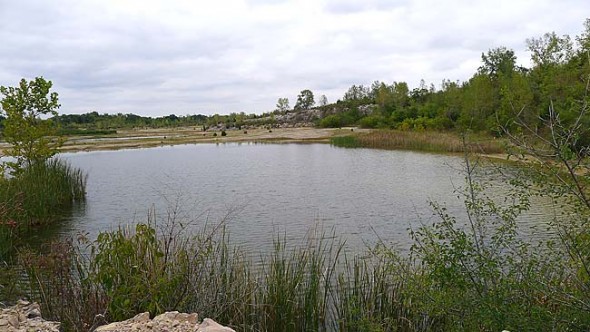 A former Cemex quarry was turned into a city park, Oakes Quarry Park, which one area resident said “looks like a meteorite hit it.” (Photo by Megan Bachman)

Cemex is determined to expand its limestone mining operation into Xenia Township southwest of Yellow Springs.

The company, which operates a cement plant on Linebaugh Road, wants to quarry a 290-acre property east of Ohio 235, south of West Hyde Road and west of West Enon Road. View map: CEMEX_ANX_MAP

Since the land is not zoned for mineral extraction, Cemex initially asked Xenia Township to rezone the property, a request that was denied by township trustees in 2011.

Now Cemex is seeking to have several parcels annexed into Fairborn, which would pave the way for mining. At the same time, Xenia Township Trustees have asked their zoning board to reconsider rezoning the property to mineral extraction to prevent annexation.

Either way, Cemex will likely mine limestone at the Xenia Township property, a development that neighbors of the proposed quarry were dismayed to learn about at a public hearing two weeks ago.

Cemex also plans to seek annexation of more than 1,000 additional acres in Xenia Township, property that is located just west of Ohio 235 both north and south of Dayton-Yellow Springs Road and which is appraised at $4.7 million. In total Cemex owns nearly 4,000 acres in the area.

Xenia Township is looking at rezoning so that more tax revenues would stay within the township, annexation of additional township land would be halted and Cemex would have to comply with the township’s stricter zoning regulations, according to Xenia Township administrator Alan Stock.

But residents are skeptical. As area resident Dan O’Callahan sees it: “The trustees are stuck between a rock and a gravel pit.”

“If we approve the zoning change we do it under Xenia Township regulations and rules which provide buffering and a bunch of other safeguards for the residents,” O’Callahan said. “But if we approve it, they can start mining the day after it’s approved … I prefer the delay tactic.”

Neighbors also said they were worried that if the property were mined, water wells would collapse, dynamite explosions would shake their homes, dust would impair their health, and property values would plummet, among other concerns.

The Xenia Township zoning commission will meet to decide whether to rezone the property Tuesday, Sept. 23, at the Trustee Offices, 8 Brush Row Rd., Xenia. The Xenia Township Trustees will later meet to approve or deny the zoning change.

Cemex, meanwhile, sees the expansion of its mining operation as essential to the plant’s future according to a statement from Sara Engdahl, director of communications for Cemex USA.

“CEMEX recently entered into an annexation agreement with the City of Fairborn in order to provide long-term sustainability for our cement plant, including our quarry, by securing mineral reserves located on Cemex’s property,” the statement read.

Read the full story in the Sept. 18 issue of the News.