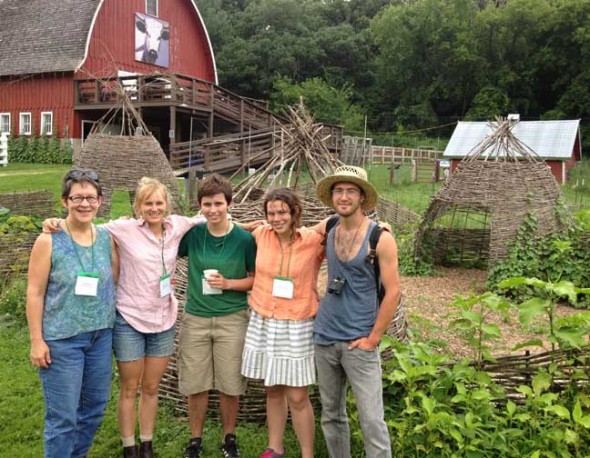 At the perennially radical Antioch College, a new crop of students is learning about radical perennials.

Modern breeds of carbon-sequestering perennial grains are one aspect of an agricultural revolution students are now seeding on the Antioch farm. Having recently returned from a summer field trip to Iowa and Kansas, students are armed with a bounty of new ideas for the campus and community. And while it is typical for colleges to have libraries and symposia, these students are now talking seed libraries and pollinator symposia.

“I definitely feel lucky that we’re able to think about what sustainable food systems look like, rather than just how are we going to feed ourselves right now,” she said.

Students will share seed-saving techniques for tomatoes during a Tomato Walk at 10 a.m. Saturday, Sept. 6, on the Antioch farm. It is the first of several planned events during which students will share what they learned from their summer field trip to the Land Institute, Seed Saver’s Exchange Conference and Whiterock Conservancy. Other events planned for the fall and winter are a Seed School and a pollinator symposium to promote “pollinator pathways” through Yellow Springs.

Farm empowers students
In addition to the daily tasks of feeding animals and weeding the garden, students who work on the farm are helping to shape its future. They are also hard at work on the larger campus food, waste and pesticide policies, while finding ways to learn from, and teach, the greater Yellow Springs community.

According to students, the Antioch farm is a nexus of academic and practical learning, a place of confidence-building and a focal point for their community. It is also an inspiring place where students can take small steps towards a solution to major global crises, they said.

“Some of our classes can be ‘doomsday’ but the farm is about what I can actually do,” said second-year student Charlotte Pulitzer. “The solutions are so doable and attainable there.”

During a co-op in western Massachusetts at a farm that employed people with mental illness, Pulitzer, a social work major, saw a way to incorporate farming into social work in a powerful way, since “nature connection is a way of healing,” she said.

As Bridgeman sees it, the college farm helps students integrate learning across the curriculum, from biology to genetics, history and anthropology, and engages students in a way that nothing else can, while small steps, like limiting pesticide use on campus, she said, “empowers them to fight the bigger fight.”
“Whether it’s going up against Monsanto and GMO seeds or changing the whole pesticide scene, you have to start somewhere and grasp onto something,” Bridgeman said. “You have to have hope so you don’t get paralyzed and these students are feeling, ‘Now I can do this.’”

Gabe Amrhein, another second-year student, has found intellectual stimulation and empowerment on the farm. He had been in charge of composting waste at Antioch for the last year, gaining perspective in how much waste the college produces on a daily basis and the potential for re-using it productively. He sees that the farm has “great potential to be more efficient” and is excited that students have opportunities for leadership on the farm.

Every two days Amrhein takes multiple trips in a golf cart with trailer attached hauling organic waste from dining halls, dorms and administrative buildings, motivated by the fact that “when we don’t pick up the waste, it goes to a landfill,” which is a problem because it means “burying nutrients deep in the ground where we can’t use them,” he said.

Sara Brooks, who is finishing her third year, is hard at work calculating exactly how much of the food Antiochians consume is local, sustainable and just. The philosophy major doesn’t want to become a farmer, but is excited by impacting the school’s food policy as well as the region’s sustainable agriculture scene. Antioch is looking at joining 363 other U.S. colleges in the Real Food Challenge, where it would commit to buying at least 20 percent of its food from local, fair, ecologically-sound or humane sources by 2020. Brooks is using the organization’s calculator to see how much progress they have already made, and estimates that the college is currently at far more than 20 percent.

“Our numbers are going up, which is a good thing, and this season is the best ever,” Brooks reported. Brooks is especially encouraged that the Antioch administration is putting the crafting of its food policy in the hands of students.

“They have always given the kitchen leeway to cater to what students want,” Brooks said, adding that students have pushed for fewer GMO foods, more sustainably-raised meat and fewer ingredients from national distributors like U.S. foods.
To Pulitzer, Antioch without the farm wouldn’t be the same.

“I don’t know that Antioch would mean so much to me without the farm,” she said. “I need it in order for what I learn in the classroom to sink in. Plus I get to feed my community and know they are eating something that is healthy and grown with love.”

New, better ways to grow food
This summer a small group of students who volunteer, work and co-op at the farm or on Antioch food policy traveled to Iowa and Kansas to hear from leaders in the sustainable agriculture movement about some of its most promising developments. Bridgeman called the field trip “transformative” as students learned the latest research on how to save seeds, perennialize calorie crops like wheat and sorghum and restore prairie lands.

“It is a much bigger picture than organic, local or ecological agriculture,” Bridgeman said.

Seed Saver’s Exchange in Decorah, Iowa, the largest non-governmental seed bank in the United States, collects, grows and shares heirloom seeds and plants, some of which are endangered. Saving seeds was practiced for millennia until the advent of industrial agriculture and commercial seed companies, which greatly reduced crop genetic diversity. Accordign to the Millennium Seed Bank Partnership, an estimated 60,000 to 100,000 plant species today are threatened with extinction. But local seeds adapted to local environmental conditions grow best here, and should be carefully selected and passed on, Bridgeman said.

“We save the seed that works best in our area, so we’re not using a seed from Siberia,” explained Bridgeman. “And we are recapturing the seeds that used to work well here.”

For example, the vast majority of apple varieties that were in use in 1900 are now extinct or dying out, according to Seed Saver’s Exchange website, while a handful of apple varieties account for the majority of production. So the organization tracked down seeds stored in government and private collections and now maintains an orchard with hundreds of different varieties of 19th century apples.

To undertake a seed-saving project in Yellow Springs where local seeds would be collected, stored, and exchanged, Antioch would have to collaborate with Yellow Springs area gardeners and farmers, students emphasized. Antioch students could help find and document heirloom varieties now in use while teaching local gardeners how to properly save seed, which can be tricky, involving particular isolation, propagation and storage techniques. Students envision an educational event, or seed school here, with the ultimate goal of starting a seed library at Antioch.

Gjessing looks forward to working with the Yellow Springs community to start saving seeds here, a project she sees through an “anthropology lens” since seeds are “so important to culture,” she said.

Students were also inspired by the work at the Whiterock Conservancy in Coon Rapids, Iowa. There an Antioch alum donated 5,500 acres now being restored to prairie and oak savannah, which once comprised 15 percent of the Iowa landscape, according to Bridgeman. Antioch now has a co-op position at the organization, during which students will participate in controlled burns, rotation grazing, establishing conservation trails and more, afterward bringing back that knowledge to the Antioch campus.

Finally, the students visited Wes Jackson’s Land Institute in Salina, Kan., which has been engaged in experimental research into perennial polycultures for decades. With two new co-op positions at the organization, students this fall will learn hand-threshing, tissue culture, plant emasculation, pollination and more.
Students also talked about creating a pollinator pathway in Yellow Springs to encourage villagers to grow native plant species and avoid the use of pesticides and are involved in various other activities in town. And in another campus-community collaboration, Brooks, who works in the Antioch kitchen as part of her co-op, is working with Michele Burns of the Tecumseh Land Trust to get an electronic benefits transfer machine at the Yellow Springs Farmer’s Market downtown, so that those who use the Supplemental Nutritional Assistance Program, also known as Food Stamps, can use them for fresh, local produce.