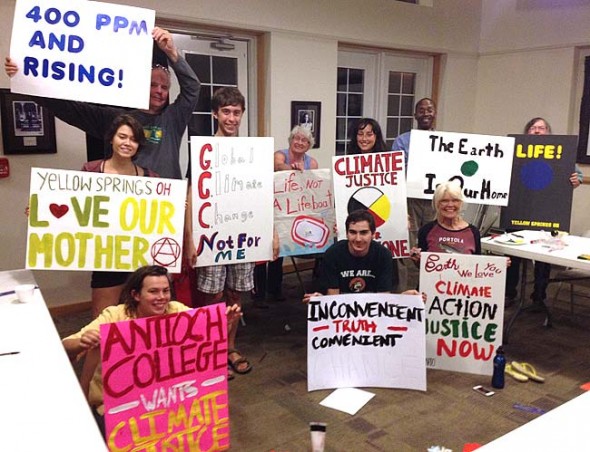 Villagers to walk for weather

This week in climate change news, record rains pounded the desert southwest, a new study reported that half of the birds of North America could go extinct by the end of the century and a new documentary exposed the corporate interests and citizen apathy hampering efforts to address climate change, asking:

“When it comes to climate change, why do we do so little when we know so much?”

Concerned Yellow Springs residents and Antioch College students are asking themselves the same question. And soon a group of them will take to the streets of New York City to demand the U.S. and world take action to forestall dangerous climate change.

About 60 locals (including 30 Antioch students) will be among the several hundred thousand people participating in what organizers are billing as the largest climate change march in history — the People’s Climate Change March on Sunday, Sept. 21. Yellow Springs is one of three Ohio locations chartering a bus to take protestors to the historic march, and while the local bus is full, organizers encourage participants to join the waiting list. Others concerned about the climate crisis can also carpool from Yellow Springs.

To join the locals marching in the rally, contact Eric Miller at Antioch College at emiller@antiochcollege.org.

The People’s Climate Change March comes days before a U.N. climate summit in New York organized by U.N. Secretary General Ban Ki-moon to “galvanize and catalyze climate action” ahead of next year’s climate talks in Paris, according to the U.N.

Locals believe that marching en masse will show world leaders that “the people are not apathetic and are beginning to push back,” according to Miller, an annual fund officer at Antioch.

“We want to push a legislative agenda,” Miller said. “I’m not about yelling and screaming to make myself feel good — I want tangible progress.”

“It’s crucial that we act while we still have time to change it or stop it without adverse effects occurring,” Allen said.

According to the U.N., 192 countries in the world have already agreed as part of the Kyoto Protocol to cut their carbon dioxide emissions with a global goal of keeping carbon dioxide concentrations at 400 parts per million, so that the world temperature doesn’t rise more than 2 degrees Celsius above the preindustrial average. However, not only did the U.S. fail to ratify that treaty (along with four other countries), scientists are increasingly alarmed about the pace at which the climate is changing and the need for potentially more drastic cuts.

NASA climate scientist James Hansen, for example, sees many “tipping points” already underway and urges policymakers to consider a new goal to return to 350 ppm as soon as possible. And this week, a Price Waterhouse Cooper report argued that countries need to cut emissions at more than five times their current rate for economic growth to continue. Ki-moon hopes to get new pledges from major nations at the upcoming New York climate meeting to deeper cuts that would limit warming to 1.5 degrees Celsius.

At the current rate of carbon dioxide emissions, the world is on track for a 4-degree Celsius temperature rise, which the World Bank recently said must be avoided because it would be “marked by extreme heat-waves, declining global food stocks, loss of ecosystems and biodiversity, and life-threatening sea level rise” and would hurt the poorest the most. Meanwhile, only about one-third of Americans say they worry a great deal about global warming, according to a Gallup poll from earlier this year, a contrast that local climate change activists find concerning.

But locals participating in the march also see the power in collective action to push for change. Allen, for one, is hopeful that the march will “get people excited” and help them see how to “incorporate their passions to support the movement.” As a performance major at Antioch, Allen wants to use art to make cultural changes.

“This people’s march is great because it’s starting to get into the culture,” he said. “You can make as many documentaries as you want and teach it in schools, but what you really need to do is change the culture.”

March organizer Eric Johnson, a local video editor, hopes to use the rally as a way to embarrass Ohio politicians who voted to gut Ohio’s renewable energy portfolio standards earlier this year, he said.

“Ohio is the only state that has gone backwards in support of renewable energy, which is horrifying,” Johnson said.

Johnson said the movement needs to reframe the climate change issue as a fossil fuels issue, since fossil fuels are responsible for the vast majority of the global CO2 increase since the industrial revolution.

Antioch College is part of a coalition of more than 1,000 organizations working together to put on the march. That the college officially endorsed the protest was significant to Miller, an Antioch grad who sees much potential in Antioch’s ability to be politically active on a national level on the climate change issue. While Antioch students can sometimes focus too much on campus affairs, the school also has a long reputation of political involvement from the 1960s through the 2000s, Miller added.

“I have tried to get people to look outside of our own parochial campus issues to the bigger problems that the world faces,” Miller said. “Our students have begun to become organizers again.”

Allen said that Antioch’s protest history was legend and a big draw for him to come here and that he has recently seen students full of passion on many issues. For example, many students recently protested at a Beavercreek WalMart where a black man was fatally shot by police while holding a pellet gun.

Allen added that he feels a sense of pride going into the rally hailing from a college that is trying to cut its own environmental and climate change impact.

“I will be speaking as a student who goes to a school where we grow a lot of food we eat and live in a dorm that is powered from geothermal and solar energy,” Allen said. Antioch broke ground this week on a 1-megawatt solar farm on campus and projects it will use 90 percent renewable energy by 2018, according to a college press release.

Johnson, who attended Antioch in the early ’70s, sees that today’s students are less sectarian compared to student activists during his time on campus. At meetings to organize the bus to the march, students have all been on the “same page,” he said. Today’s protestors will travel on a fancy charter bus with a DVD player to watch movies together, while Antiochians would have traveled on a school bus with no air conditioning, singing all the way, Miller said. But despite the differences, the protest tradition at Antioch lives on.

“Every generation of Antiochians has much more in common than what separates them — the only real difference is more on style than on substance,” Miller said, adding: “And even the style is not that different.”