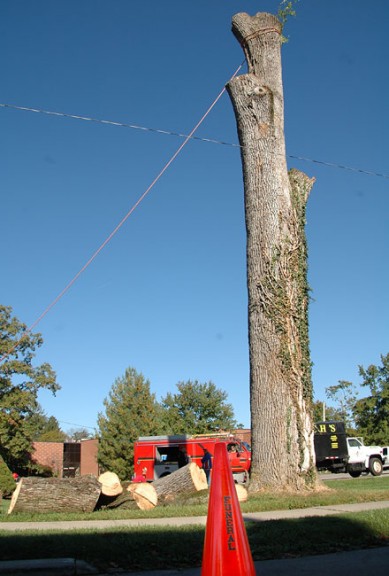 The remnants of two old ash trees killed by the emerald ash borer were felled Oct. 8. (Photos by Matt Minde)

Two longtime watchers over the comings and goings of over a century and a half of Yellow Springs have been felled. The mighty ash trees on the front lawn of the Jackson Lytle & Lewis Funeral Home at 322 Xenia Avenue were mortally wounded by the tiny emerald ash borer and its larvae, as were so many of the other ash trees in the village.

Workers had removed all of the branches and limbs that make up the crown a few weeks previous, leaving the defiant-looking trunks. These were finally downed on Oct. 8, just three days before the fall Street Fair, where they had provided shade for many a performance and spectacle over the years.

A quick count of the growth rings at the base of one of the trees came up at about 150, with each ring marking a year’s growth.

The large trunks were cut into approximately 10-12 foot sections, and will meet the same fate which has befallen many of the other larger ash trees killed by the borer: they will be milled for their lumber.