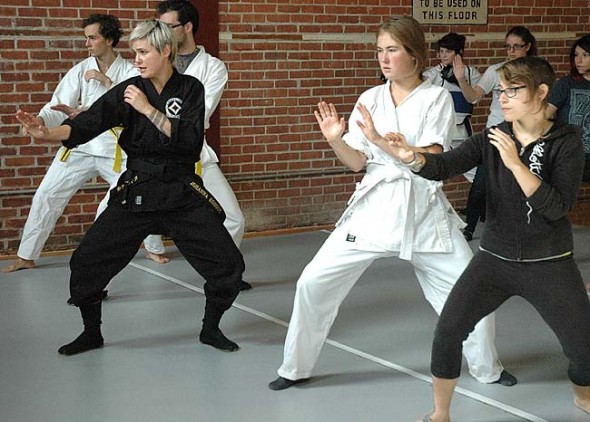 Self-defense training often begins and ends with that blanket statement.

For the last year, Johanna Kohout has been training Antioch College students to deal with a range of physical and verbal assaults through To-Shin Do, a martial art that marries Japanese ninjutsu with modern psychology.

To-Shin Do incorporates mindfulness practice, models its techniques on the elements of earth, water, fire and wind, and above all aims to create empowered, confident and whole individuals, according to Kohout, an Antioch alum and first-degree black belt.

“With this training we actually replace the old stories and the history of oppression and domination that tells us who we can and can’t be in the world,” Kohout said. “You can be whoever you want to be and instead of learning it intellectually we learn and practice and embody it which allows for real transformational growth.”

Kohout feels the training is as essential for college students (1 in 5 women will be sexually assaulted during college) as it is for high schoolers, who can face these threats even earlier.

“It’s all information I wish I would have known,” Kohout said of the workshop. “Hopefully no one will ever be assaulted, but it helps with navigating relationships and knowing what we want.”

The workshop, called Elemental Program, was developed at Ball State University using research about the most common scenarios for assaults — from a long-term friend wanting to take the relationship to a more intimate level to a party hookup scenario. It follows the approach of using different elements to deal with an attack.

Kohout currently teaches Antioch students through a two-credit Community Life course but is also hoping to to offer classes to local adults and children starting in January.

At a recent beginners class for Antioch students on the second floor of the Wellness Center, Kohout led an “earth element” exercise where students repelled an attack by putting up their hands like stop signs, repeating sternly “stop it — back off,” and practicing a basic escape from a wrist grab. According to Kohout, the practices draw from the earth element, which is about “confidence and stability, holding our ground, standing in our truth and believing in ourselves,” she said. Many of the techniques involved ways to repel an attack before it even begins.

“The first thing is, is there a way to shut this down before it gets to violence?” Kohout asked students.

Even though Kohout only began teaching To-Shin Do at Antioch last year, many students are already deeply engaged and say their lives have changed from the practice. To-Shin Do may currently be the largest student group on campus, they said.

After the first week of class, Gweena Lorenz, now a blue-black belt, became more confident walking downtown at night from the Antioch campus, and she became less afraid of the dark than before, she said. Renée Burkenmeier, also blue-white belt, said for her To-Shin Do is more than physical self-protection, it is about emotional self-protection and wellness.

“To really be safe in the world and in order to get what I want to get accomplished, I really need to be present and be whole,” Burkenmeier said. “And I need to be able to take care of myself and love myself.”

The school currently has 23 Antioch students who are between yellow and blue-black belt and eight students will receive new belts at a graduation ceremony at 3 p.m. Sunday, Oct. 26. Six others will make a pledge to become black belts. The graduation will include demonstrations from students and black belts from other Dayton area dojos, as well as cake. The event, in the second-floor gym of the Antioch Wellness Center, is open to the public.

Kohout graduated from Antioch in 2004 and moved to New Mexico, where she began studying Aikido and later training in To Shin Do from a distance via book and DVD. Kohout returned to the area to study at the Dayton Quest Center, the international headquarters of To Shin Do, and to help her alma mater during reopening. Kohout served as a Residence Life manger at Antioch over the last three years while pursuing her black belt, and only recently left the position at the college to become a full-time To Shin Do instructor.

Kohout, who lives in Dayton, is passionate about teaching Antioch students techniques she wishes she had while a student — especially since many Antioch students spend time during co-op in unfamiliar cities and abroad, in situations that could pose dangers. She has started teaching “Be Your Own Bodyguard” classes to students before they head off to co-op.

To Shin Do was developed in 1997 by Stephen K. Hayes, who created a ninja-inspired “intelligent self-defense” system after studying in Japan, according to the To Shin Do official website. To Shin Do, which translates as “sword spirit path” is described as “a thorough system of personal preparation for winning conflicts and overcoming opposition that can surprise us in everyday living.” Its headquarters school is in Centerville. Hayes, who was called by Black Belt Magazine one of the ten most influential martial arts masters alive in the world today, continues to teach at the headquarters school in Centerville.

According to Kohout, students receive new belts as they master the different elemental approaches. After the earth element, focused on standing one’s ground, students explore water approaches, which involves, “thinking about strategy and responding to the world,” Kohout said.

“We give up our space and then we wash back in,” she explained.

Later students draw on the element of fire, which is “all about connection,” Kohout said. “The physical technique here is moving in and consuming.” Later the wind element involves “sliding out of the way so the problem disappears” and “the void” is about drawing on any one of the elements when needed. In that way multiple attackers can be dealt with.

Practically, techniques can involve joint-locking, throwing, tripping, striking, the use of a variety of weapons (including everyday items like high-heeled shoes, cell phones, pens and umbrellas), and more. To-Shin Do also incorporates traditional weapons training including swords as well as learning defenses for pistols, knives and short sticks.

In To-Shin Do students are called ninjas, which Kohout explained is because students are “thinking how to use themselves strategically” as the historic ninja of Japan did.

“The idea of the ninja is we’re not out to gain power … we’re here to protect ourselves and our communities from those who want to take our comfort and joy,” Kohout said.

Sullivan, who is also helping spread To Shin Do as part of his co-op, finds the ninja parallel especially relevant for Antioch.

“The ninja were resisting an oppressive force and Antioch has been a college resisting the systems of oppression. ”

For more information or to observe a class contact Kohout at johannakohout@gmail.com or call her at 937-238-9891.