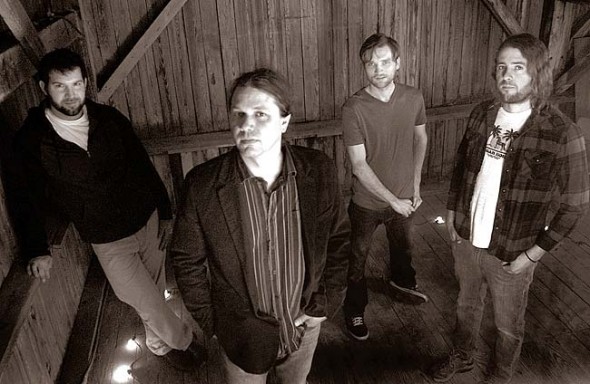 Local band Stark Folk, which is unapologetically tending the flames of ’60s psych rock, plays at a release party for its new record at Peach’s Grill on Friday, Oct. 3. (Photo by Megan Bachman)

Bands today shout above the din of music by claiming niche genres — obscure stylings from shoegaze to synthpop — while the music itself has gotten a bit more gloomy.

The two-song 45 rpm “Modern Times/Ode to a Legend” showcases the band’s straightforward songwriting over two tracks rich with punchy rhythm guitar, potent electric leads and memorable refrains. They are songs itching to be sung along to. As Burkett says, “Rock ‘n’ roll is supposed to be fun. It’s not supposed to be a drag.”

Stark Folk plays at a release party for its new record at Peach’s Grill on Friday, Oct. 3, with local band Speaking Suns, which takes the stage at 10 p.m. Stark Folk starts at 11:30 p.m.

Speaking Suns plays its last local show before hitting the road in support of its new EP, Vanishing Country, released by Great Guys Music in September.

Both acts are garage bands in the best sense of the word with a do-it-yourself ethic and rebellion from the status quo. Stark Folk Band additionally casts its music as “rock with a consciousness,” in the words of Burkett, who works in conflict resolution and carpentry.

“With my lyrics I try to deliver a sense of empowerment and liberation,” Burkett said. “It’s aimed at inspiring people.”

For example, “Modern Times,” the A-side of the 7-inch, riffs on the idea that we all exhibit the “symptoms of modern times,” while envisioning a way out of it. Ultimately Burkett hopes his music “transports and transforms” his listeners.

The name Stark Folk itself stands for two important elements of the project — stark for its revealed, transparent and raw nature and folk since it is music made by people for people. Burkett was inspired by a story in Bob Dylan’s biography in coining the band name.

Jazz legend Thelonious Monk once reportedly responded to a young, brash Bob Dylan who introduced himself as a folk music performer, by telling Dylan, “We all play folk music.”

“Monk was saying ‘You’re not the only one making folk music,’” Burkett said. “We’re all sharing in this….[Folk music] is made by people for people and it’s a way to take people away and inspire them to do something.”

Shaffer, a local videographer and music producer, sees the project as about “creating a fun experience” while drawing energy from styles as diverse as punk and psyche-rock.

“All of us in the band are sick of this shoegaze style of indie rock where everyone is really serious and not interacting with the audience and looking down in their instruments,” Shaffer said. “We’re interested in bringing back arena rock — something you can sing to and jump around to.”

Filling out the sound are electrical engineer and yoga teacher Jeremy Ma, of Dayton, on drums and Dave Jurcsisn, of Huber Heights, on bass.

Shaffer added that the 7-inch is a “goal filled in reverse.” While most bands start out with a 7-inch single release, Stark Folk Band already has two full-length LPs to its name: 2010’s Well Oiled and 2008’s self-titled Stark Folk Band, both through Old3C Records in Columbus. Shaffer produced the band’s last two albums.

The new 7-inch is the third release of Josh Castleberry’s local label Toxic Beauty Records. The B-side is a tribute to Columbus recording legend Mike “Rep” Hummel while the A-side “Modern Times” is Stark Folk’s definite statement about its boisterous and brazen brand of rock ‘n’ roll.

Burkett and Shaffer have been music collaborators for 18 long years, previously delving into experimental rock music together as A Landscape Yesterday. The Brookville natives bonded in their early 20s over a love of Guided by Voices, post-punk and obscure 1960s artists, and set out to make their own music in the punk-centric Columbus music scene.

After moving to the Yellow Springs area, the duo recorded Stark Folk records in the Union school house and in a barn-turned-studio set between woods and a cornfield off of Old Mill Road. The “Modern Times/Ode to a Legend” 7-inch was recorded at Studio Z in MillWorks with sound engineering assistance from Zac Daniels.

The preference for pressed vinyl over digital MP3s or burned CDs is symbolic of Stark Folk itself. The band sees its music as timeless and intentional, an act of dedication and a work of art.

“In a digital age, a slab of vinyl speaks to the commitment of your band and the project you’re working on,” Burkett said. “With vinyl, it’s a way of making art, a way of consecrating your work and creating a timeless feel.”

Above all, Stark Folk is not trying to reinvent the wheel in rock music, nor are they out to compete for listeners in a crowded music scene. Instead, Stark Folks wants to use the medium of rock as it was intended — as an act of creative expression and a way to challenge authority.

“Everyone is in a band, everyone is a guitar player, but for me it’s not about competing, it’s about the creative process,” Burkett said. “It’s a way of tapping into yourself. It is a spiritual experience.”