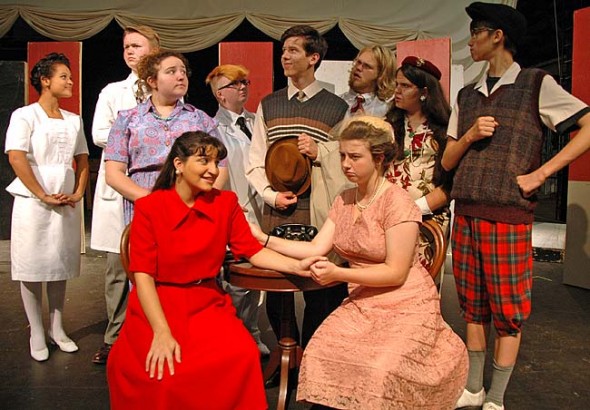 In the comedy, Elwood P. Dowd (Josh Seitz) causes grief for his social-climber sister Veta (Anna Knippling) with his constant talk of seeing an imaginary friend, Harvey, who may be a pooka — a mischievous fairie spirit in animal form from Celtic mythology. When Veta tries to commit Elwood, a “comedy of errors” ensues, and she is taken into the sanitarium instead.

To the YSHS students in the show, the message of “Harvey” is still relevant today as the play addresses the stigma of mental illness, the idea that people have different realities and the importance of acceptance.

“The boundaries about what is real and what isn’t are not so strict,” said Knippling, who plays Veta. “It’s about accepting different mindsets and being open minded.”

Ultimately, Elwood, whom assistant director Shannon Lewis describes as “a calm, kind and charismatic man” causes the cast, including psychiatrists, nurses, judges and family members, to question their own realities, and their quick judgment of him.

“Even though he sees a rabbit he is kind, generous and giving — so what is really wrong with him?” Lewis said. And as the press release for the show asks, “Which is the greater prison — one of white walls and soft footed attendants, or the cage of social expectation and respectability?”

“Harvey” is the first performance on the main stage of the newly-renovated Antioch Foundry Theater, the first community performance at the theater and the first play YSHS will perform in the space in 10 years.

To Jerome Borchers, who has been working on a community performance space for nearly a decade with the Center for the Arts Steering Committee and the Yellow Springs Arts Council, the staging of “Harvey” is a significant moment for the local arts community.

“We’ve been working on having a venue in town since 2005 and it’s actually happening,” Borchers said. “This is a really big deal.”

Antioch completed the first of four phases of renovations at the Foundry Theater for around $1 million, Borchers added, about half of which came from local donors ($200,000 alone from the Yellow Springs Community Foundation.) A new Antioch Area Theater Advisory Group is acting as a liaison to the college to represent the community’s needs for the space.

For director Cindy Lincoln, who is participating in her fourth YSHS show, the new Foundry Theater space has meant an extra challenge learning new lighting and other technical details. But it’s nice to have a “dedicated space for theater” compared to the stage in the Mills Lawn Elementary School gymnasium/cafeteria, which has hosted high school plays for the last 10 years, she added.

Lincoln said that YSHS students are finding much to relate to in “Harvey,” which is also the first full-length non-musical play the YSHS Drama Troupe has done in two years. While the last show, the musical “Pirates of Penzance,” was a “sweet, cute and fun story of boy meets girl,” she said, “Harvey” is a play that has deeper meaning, and students are “finding interesting things in it.”

“These students are really good at looking into a script and pulling out of it different things,” Lincoln said. “They are just amazing kids — caring, talented, smart and open minded.”

Lincoln spent much rehearsal time with students doing “desk work,” or exploring their character’s personalities and the playwright’s motivations. Antioch College assistant philosophy professor Lew Trelawny-Cassity even led actors in a discussion about the work.

As a result, actors are impressive in their depictions of characters, even while they are a little behind in memorizing their lines, Lincoln said. For example, Josh Seitz, who plays Elwood, has a “very sweet approach to Elwood — like milk toast.” Meanwhile, his relationship with Harvey, the rabbit, is utterly convincing.

“When I walk onto the stage, I actually see a rabbit — I visualize him,” Seitz said.

Knippling impresses as an 18-year-old playing a grown woman, Veta, without making her a caricature, Lincoln said. During Knippling performances, there are “moments of brilliance,” she added.

“She has put some work into it you don’t often see from high school students,” Lincoln said.

Kaila Russell, in the role of the Veta’s daughter Myrtle, is “really good at playing a sassy, young, cute teenager” from the 1940s, Lincoln said. For Russell, the ’40s speech has been difficult to master, as Russell is adept at modern slang. “I have to work on saying phrases like ‘you couldn’t dream,’ which I would say as ‘you can’t believe,’” she said.

Alex Kellogg, who played the female lead of Ruth in “Pirates of Penzance,” now plays a convincing young, handsome male doctor, while Simone Collins does a “beautiful job” as a creepy, smarmy male character, Lincoln said.

Seitz, Knippling, Russell, Kellogg and Collins are all seniors playing in their final nonmusical play at YSHS, Lincoln added.

Lincoln promises that audience members will find something valuable in the play, which she said is “very applicable to our community.”

“What is your perception of reality? How do you see yourself through other people’s eyes? How do other people see you? [Audience members] won’t go home without any meaning.”