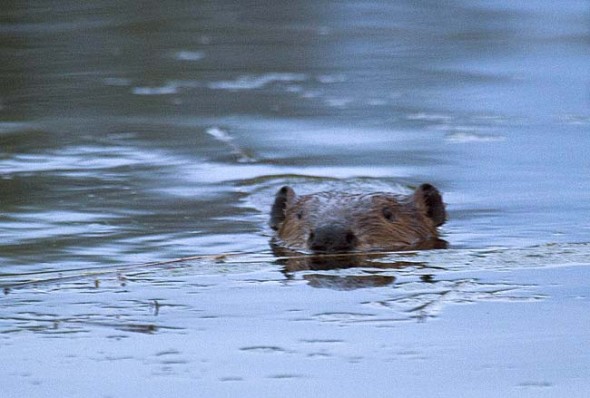 One of the beavers that have built a dam in a stormwater management area in the Glass Farm. (Submitted photo by Scott Stolsenberg)

A detention basin along King Street has become an accidental wetland at the paws of furry, semi-aquatic rodents that recently moved into the village.

But the beavers have been a menace, too. Over the last few years, Village crews were forced to repeatedly destroy beaver dams blocking a culvert that carries a stream on the property under King Street. The dam-blocked culvert may have worsened flooding on the stream during a five-inch rain event in May.

In a recent truce between castorimorpha and human, the beavers are now allowed to stay, thanks to a contraption proposed by two villagers, designed by a local engineer, built by Village crews and installed this summer.

The “beaver deceiver” allows local beavers to dam the culvert while allowing some water to still flow through. And while the formerly dry detention basin now has standing water, its ability to prevent flooding downstream has only been slightly reduced. 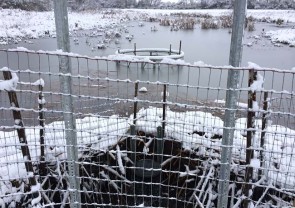 The ‘beaver deceiver’ structure shown here allows the beavers to build a dam in the culvert while still allowing enough water drainage to abate periodic flooding. (Photo by Megan Bachman)

Not only were the beavers saved, but other species attracted to the new ecosystem can thrive too, while the wetland will additionally purify the stream, according to Village Council member Marianne MacQueen, who was instrumental in the effort.

Still, according to local engineer John Eastman, who designed the “beaver deceiver,” some area neighbors are concerned that mosquitoes will proliferate in the new wetland, as least until the ecosystem is fully established with mosquito predators like dragonflies and frogs, while the device still needs to be tested during heavy rains and spring floods.

But he said he believes the combination of ecological and educational benefits are worth it, as does MacQueen.

“Given the destruction we are doing to our environment, to have one little gem of a wetlands in our village that’s providing for a diversity of species is well worth the effort,” MacQueen said. “We spent a couple hundred dollars on a flow device so the beavers can remain, and now the rest of the species can remain too.”

“Beavers are a keystone species because they create an ecosystem other species are dependent upon,” Hennessy said.

Beavers were nearly wiped out in North America during the 17th and 18th centuries, when they were relentlessly trapped for their fur. The beaver population dropped from an estimated 65 to 400 million beavers in pre-Colonial days to as low as 100,000 by 1900 and has recovered to between 6 and 12 million today. Not coincidentally, wetlands had a similar fate. From beaver loss and draining, in the two centuries between 1780 and 1980, Ohio lost 90 percent of its wetlands, according to the U.S. Environmental Protection Agency.

Beavers build dams on streams in order to raise water levels behind them so they are better protected from predators and to create a habitat rich in fast-growing trees, which are both food sources and building materials. As a result, beavers create a wetland ecosystem that supports a wide variety of other mammals, fish, amphibians, birds and ducks. For example, slower waters attract new fish species. Mammals like deer are protected in tall grasses that proliferate. Beavers later build themselves lodges upstream from their dams, homes that keep them safe and warm in winter.

At the Glass Farm, local beavers have built several dams on the unnamed creek that snakes around Thistle Creek before flowing into the detention area, and they have erected at least one lodge. Using available building materials, beavers have even incorporated beer cans into their local dams, but are mostly relying on small trees in the area, especially Bradford pear trees, Hennessy said. At least two or three beavers are assumed to be living in the area.

Nature photographer Scott Stolsenberg, whose Robinwood Drive home backs up to the Glass Farm, has witnessed a transformation on the property in a short amount of time.

“The whole ecosystem has changed,” Stolsenberg said. “There is a diversity of wildlife because you have trees, fields and water there,” he said, referring to a small stand of trees and active farmland also located on the 14-acre conservation area on the eastern portion of Glass Farm.

Stolsenberg has seen in the area — and photographed — nesting mallard ducks, foxes hunting, spawning toads and frogs, a catbird dining on a praying mantis, blue herons diving for fish and a variety of birds passing through, including sandpipers, blue herons, great egrets, cedar waxwings, yellow-shafted flickers, sharp-shinned hawks and more.

From menace to ally

But the beavers were not immediately embraced by the village. The rodents, which many treat as pests, were continually thwarted in their efforts to build dams at the detention basin for about two years. During that time, members of the Village maintenance crew would occasionally use a backhoe to tear down the beaver dam blocking the culvert. But the tenacious beavers would sometimes erect a new dam at the site overnight. And after a five-inch rain in May led to severe flooding of the Glass Farm stream (and everywhere else in the village) then-Interim Village Manager Kent Bristol called a meeting of neighbors and other stakeholders to figure out a more permanent solution.

Bristol was interested in both preserving the function of the detention basis while keeping the beavers, according to MacQueen, who attended the meeting. “He really gave legitimacy to the beavers,” MacQueen said of Bristol. At around the same time Hennessy and MacQueen had started researching ways to embrace the beavers, which they saw as beneficial to the area. They proposed a device to allow the beavers to build their dam at the culvert while preventing the resulting beaver pond from getting too high. Eastman then took the “beaver deceiver” plans used in more than 1,000 installations in Massachusetts and tailored it to the Glass Farm detention basin.

Eastman calculated that a pond height of three feet at the culvert would protect the beavers from predators and still allow the detention basin to prevent downstream areas from flooding. Before the detention basin was built around 10 years ago, the stream, which goes under King Street, across Yellow Springs-Fairfield Road and behind the Fair Acres neighborhood, would often flood several properties.

According to Eastman, with the beaver dam in place, the detention basin volume is only reduced by about 6 percent of the total storage volume. That small amount wouldn’t likely affect flooding downstream, he said.

“This change will have very little impact on the frequency with which the downstream banks are flooded,” Eastman said.

The “beaver deceiver” works by tricking beavers into believing their dam is working to fully back up the stream. But a pipe breaches the dam through a fence, allowing water to drain from the pond into the culvert. Meanwhile, the fences at both ends of the pipe keep the beavers from damming up the pipes themselves. After Eastman drew up the specifications, Jason Hamby, Village superintendent of streets, built and installed the device with his crew. By the next day, the beavers had built their dam along the fence, as the design intended. Once the water level rose high enough, the pipe began to drain the pond. The open water surface area of the pond, when full, is about one acre, with wetlands covering a larger area, according to Eastman.

“Wetlands include what might appear to be ‘dry’ ground that is saturated slightly below the ground surface so only wetland plants can grow there,” Eastman explained.

The Glass Farm wetland is an example of beaver-led ecological restoration and a unique educational and recreational opportunity, according to MacQueen.

While there are some informal walking paths on the property, there are currently no plans for turning the area into a park. However, villagers are welcome to visit the area and many already do, MacQueen said. In the future, the Village could encourage visitors in a way that protected the wetland while educating people about the benefits of beavers.

“It’s an unusual educational opportunity for elementary to graduate students to actually study the development of wetlands created by beavers,” MacQueen said. “It’s also a habitat people can enjoy and I’m hopeful that as it develops the village will be able to balance the use of this for human enjoyment with it being a natural area.”

MacQueen is also hopeful that the experience of solving the beaver issue will inspire Village government to look at ecologically-friendly ways to manage other properties it owns, including the remainder of the Glass Farm, Gaunt Park, Ellis Pond, Beatty Hughes Park and the Bryan Center property. First the Village needs to define a concept of “good stewardship,” she said.