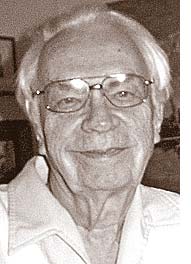 Harold J. LeVesconte passed away peacefully in his San Jose home on Nov. 6. He was 89.

Harold was born in 1925. He graduated high school in 1942 and served for three years in World War II. He received his bachelor’s degree from Olivet College and his Master of Divinity from the University of Chicago. Harold married Shirley Woodrick in 1949. They had three children, Kate, Steve and Thaleia.

Harold served as minister of several Congregational and Unitarian congregations in Illinois and Ohio, including the First Unitarian Church in Dayton from 1960 to 1965. During that time, he organized a series of seminars entitled “What Unitarians Believe.” Discussions centered around what has been called the Unitarian Trinity: truth, goodness and beauty. In 1963, Rev. LeVesconte organized a debate between a theist and an atheist. Dr. Thomas Holyoke, of the mathematics department of Antioch University, took the atheist position. Griscom Morgan, of Yellow Springs, championed the theist position. In 1963, Rev. LeVesconte brought a busload of Dayton activists to Martin Luther King’s March on Washington. In 1965, he led 700 protesters to Dayton’s City Hall to protest the killing of a Unitarian minister in Alabama and to protest the delay of Dayton’s fair housing ordinance. Also in 1965, Rev. LeVesconte brought Stokely Carmichael to speak to a packed house at First Unitarian. First Unitarian was reportedly the first integrated church in Dayton.

Harold also suffered from depression and developed an addiction to alcohol. However, after about five years of addiction, he regained his sobriety and health. His AA birthday was May 1, 1969. Harold went on to work as an alcoholism counselor in several facilities including the US Navy Hospital at Great Lakes, Ill., where he tried to “dry out the Navy.” He was active in the Alcoholics Anonymous movement from 1969 until his death, serving in a number of different capacities in his AA communities and shepherding many newcomers into sobriety.

In 1986, Harold married Lois Fiedler and the two made San Jose their new home. Here, Harold continued his work as an alcoholism counselor and his active participation in the AA community. On May 1, 2014, he achieved 45 years of sobriety. He was celebrated on that occasion as a beloved elder statesman in the AA community.

Harold will be remembered by his friends and family for his lively and inquisitive mind, his social activism and life of service. A celebration of Harold’s life will be held at the Millpond Clubhouse in San Jose, Calif., at 2 p.m., on Nov. 23. In lieu of flowers, donations in memory of Harold LeVesconte can be made to McKinley Hall, 1101 E. High St., Springfield, OH 45505 or Oesterlen Services for Youth, Inc., 1918 Mechanicsburg Rd., Springfield, OH 45503.