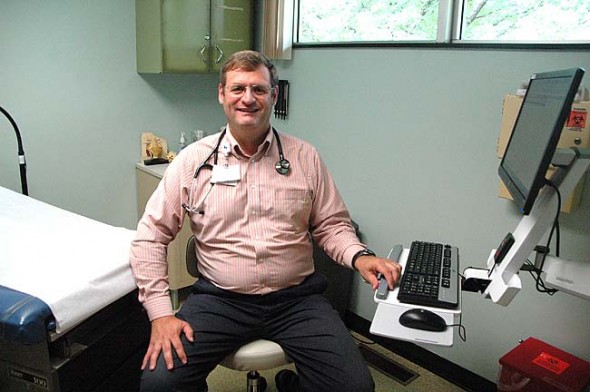 Nurse Practitioner Cliff Fawcett joined Dr. David Hyde and Dr. Neha Patel at Community Physicians this summer. Fawcett can treat and diagnose most illnesses and injuries and is available for same-day appointments on Mondays and Wednesdays during regular office hours. (Photo by Megan Bachman)

Need a splinter removed, or a sprained ankle assessed or another medical issue dealt with? Instead of rushing off to see the doctor, you can first see new local nurse practitioner Cliff Fawcett, who can probably take care of what ails you.

Fawcett, who joined Community Physicians this summer, can’t perform surgery, but he is trained to diagnose and treat most illnesses and injuries, especially the kind commonly seen at a family practice.

But Fawcett, 48, who also heads the family nurse practitioner program at Cedarville University and has 17 years of experience in the field, said his real passion is to help patients prevent disease.

“One thing that sets nurse practitioners apart is a big emphasis on health promotion and wellness and not just sick care,” Fawcett said. For example, Fawcett recently helped a patient who came in just to refill thyroid medication by reminding the person about important preventative screenings they missed.

“There are so many diseases that are important to find early,” Fawcett went on. “I hate to have people suffering from things that could have been prevented.”

Fawcett is in the office on Mondays and Wednesdays during regular office hours and is available for same day appointments. He joins Dr. David Hyde and Dr. Neha Patel.

Nurse practitioners are becoming more common sights in medical offices since the 2008 Affordable Care Act expanded the number of Americans covered by health insurance, Fawcett explained. In order to address the short supply of health care providers, nurse practitioners are filling the gap. In addition, Community Physicians needed to add a nurse practitioner on its way to becoming a designated Rural Health Clinic, which would allow specialists to visit the practice, among other benefits, Fawcett said.

Fawcett previously practiced at a medical office in Springfield and in Philadelphia where he focused on orthopedics and sports medicine. It was there that he served on the medical staffs for the NFL’s Philadelphia Eagles and the Philadelphia Flyers hockey team, for two ESPN X-games and for the 2003 FIFA women’s World Cup.

Fawcett is a board certified family nurse practitioner and received a master’s of science in Nursing at the University of Delaware.

Fawcett, who lives in Miami Township, said he has already enjoyed working in Yellow Springs, where people are “super relaxed” while patients have told him that the personal touch he offers at the practice is “refreshing.” He is also thrilled with the local community’s attitude toward lifestyle change.

“There’s an attitude in American culture that there’s a pill for everything,” Fawcett said. “In this community people are willing to change and they have a more holistic approach.”

Fawcett enjoys talking about a healthy lifestyle with his patients, including ways to get good nutrition, exercise and sleep, he said. Ultimately it’s common sense, he said, and boiled it down:

“Ride your bike and don’t eat so many Big Macs.”