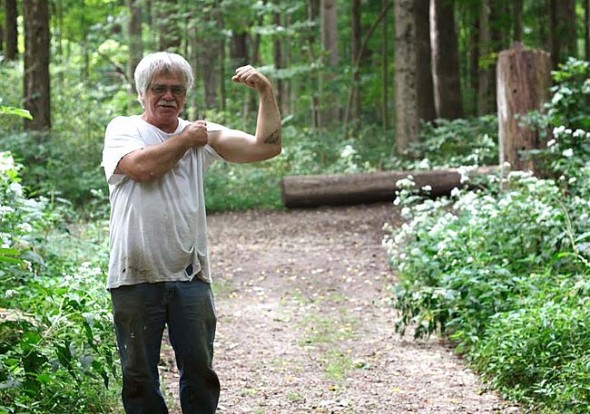 Glen volunteer Vincent Laino helped to clear invasive honeysuckle from the Glen over the summer.

Rise against the green Glen invaders

If weeding the flower garden out back sounds bad, imagine weeding a forest. Then imagine that forest encircled by an army of invasive species that work so long and efficiently that they begin to take down the older growth canopy and the native understory. It’s a predicament like “The Sorcerer’s Apprentice,” in which a young magician becomes overwhelmed by a water hauling brigade whose unbridled power he unknowingly set in motion. Glen Helen knows the story well.

With the help of both grant funding and volunteers, the Glen has worked since 2001 to actively remove the honeysuckle, garlic mustard, rose of sharon and a host of other invasives from the 1,000-acre preserve  —  initiating intensive land management along the Little Miami River corridor in the last three years and nearing the milestone of 200 acres of restored land. But controlling invasive species within the park does nothing to prevent the seeds of those same plants, which thrive en masse just outside the Glen’s borders, from returning to the Glen, by bird droppings, scat, water or wind, to restart the vicious and seemingly unbreakable cycle.

This year the Glen Helen Ecology Institute is taking a slightly different tack by partnering with Tecumseh Land Trust to apply for state funding to restore property adjacent to the Glen. In particular is a $56,000 grant from the Clean Ohio Fund to purchase an easement on the six-acre Village property behind the Bryan Center and restore it to its native state. The land is directly upstream from the Glen and therefore critical as a vector for carrying invasives downstream, and it’s largely visible from both the local community’s vantage point and as part of the northern gateway for visitors. According to GHEI Director Nick Boutis, the area is the ideal non-Glen property to start with because of its impact on the preserve as well as its importance to the village as a whole.

“It’s an extraordinary property and it’s been beseiged because no one has been taking care of it,” he said in an interview last week.

As the owner of the small wood, the Village also supports the plan. As always with an easement purchase, the property owner, in this case the Village of Yellow Springs, contributes by giving up the development rights to the property. According to Village Manager Patti Bates, the Village will also provide a $5,000 stewardship payment to TLT and a small endowment for the costs that Glen Helen will incur to maintain it each year.

Local historian David Neuhardt, also a member of TLT and Glen Helen Association, felt similarly about the Village tract and recently pieced together a history of the place for the Yellow Springs Historical Society. Because the crossing of the Yellow Springs Creek on what is now U.S. 68 has enjoyed at least three centuries of traffic, the adjacent Bryan Center tract has been an active spot. In the 1700s the road (then called Broad Ford Road) was used by militia leader George Rogers Clark and his soldiers Daniel Boone and Simon Kenton on their way to destroy Shawnee villages at Chillicothe and Piqua. In the following century, early Yellow Springs settler William Mills used the road to get products from Clifton and Byron mills to the Little Miami Railroad for distribution. And starting in the 1830s, the Mills family built first a home and then a hotel called the Yellow Springs House with attached cottages along the creek. The hotel operated for about 50 years, according to Neuhart’s history, expanding under different ownership to 100 rooms before burning down in 1902.

The tract was subsequently sold to John Bryan, owner of the farm that would later become John Bryan State Park. And in 1915, in one of the cabins that had survived the fire, Lewis Haines was said to have used a hatchet to murder Denman Duncan, Antioch College student and son of Antioch professor Amos Duncan, for what Haines thought was unwelcome attention toward his wife. The following year, the parcel was gifted to the Village of Yellow Springs and Miami Township Trustees for the purpose of building a school on condition that no one be barred from attending the school on account of color and that no religion be taught there. The school was built in 1928 and in 1935 was awarded $14,000 from the first Congressional appropriation for Works Progress Administration landscaping, including a cinder track, tennis courts, and an amphitheater, elements of which still exist today.

Though the history is captivating, the real sensitivity of the parcel lies in its effect on the Glen and its potential public use. Despite its prime location, the parcel is covered with ailanthus (tree of heaven), a heavily invasive tree that grows quickly and is choking out slower growing, native chinkapin oaks and sugar maples. Invasive Japanese nutweed, English ivy, periwinkle, wintercreeper and the invasive Norway maple are all overtaking the area and contributing to the overgrowth of those species, especially in the northern part of the Glen, just downstream.

“Hopefully this two-year Blitzkrieg will help us turn back the clock 60 years to the way the property was while the high school was still in operation,” Boutis said.

According to TLT Executive Director Krista Magaw, the land protection agency will learn if it has the money later this fall, and the work would start in the spring 2015.

Downstream from the Bryan Center there is more work on the invasive front. To continue to clear honeysuckle in the north Glen at the height of its visibility as the only green thing leafing at this time of year, the preserve will sponsor its annual Honeysuckle Daze on Saturday, Nov. 15, 9 a.m.–noon. Volunteers age 16 and older are welcome to help clear what organizers hope will be five acres of the historically significant area behind the Yellow Spring. Volunteers can park at 1075 Rt. 343 and walk into the preserve with their cutters, draggers, sprayers and choppers. Participants are also asked to dress in weather dependent layers, wear boots and bring gloves and a water bottle. Those interested should RSVP to volunteer coordinator Ann Simonson at asimonson@glenhelen.org.

The 250 acres behind the spring has been registered as a National Natural Landmark with the U.S. Park Service since 1965 due to its pristine geological example of a water-carved dolomitic base rock with a large travertine bowl around a pool and surrounded by old-growth hardwood trees. According to Boutis, the Glen has a $91,000 Clean Ohio grant to maintain the restoration of that area. The grant was furnished alongside the funds used to support the nearly $3 million easement held by TLT to permanently protect the entire Glen as a natural area. That easement is set to be finalized, hopefully by the end of the year, Magaw said. In addition the Glen recently received notice of a $70,000 from the Nature Conservancy for the restoration of the South Glen.

According to Boutis, the Glen aims to use these land restoration grants to enhance the Herculean task of ridding the land of its tenacious but unwanted species. It’s fortunate that Honeysuckle Daze “comes at a time when we have real momentum behind invasive species removal,” he said.

As for the Bryan Center property, Magaw is excited to plan for the restoration of such a public space after so many years of neglect.

“Right now it’s almost entirely covered by ailanthus — that’s all you can see from both sides of the creek,” she said. “But you can still see a few stems of [native] prairie grass that have fought their way to the Cemetery Street side.”