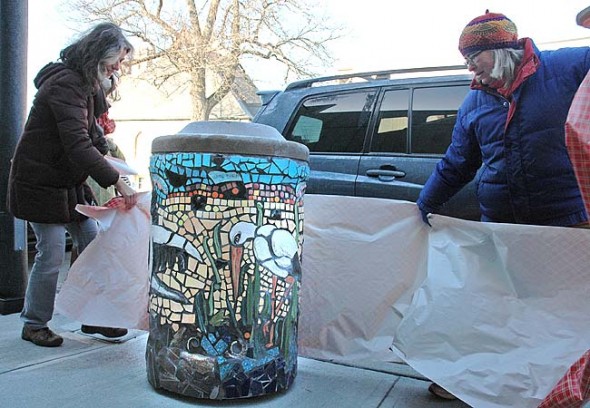 Artists Käthi Seidl, left, and Beth Holyoke unveiled their newly created artistic trash cans downtown last Friday morning, including the stork-themed can outside Sunrise Cafe. The three newly unveiled cans, which join the initial opossum-themed can outside Current Cuisine, will be joined by two other cans soon to complete a pilot project funded by the Village. (Photo by Diane Chiddister)

“Honey, please throw that trash in the art can!”

Okay, so it may take a while for villagers to give the large round cans that line downtown streets the respect they deserve. But in fact, several of the lowly Xenia Avenue receptacles that catch our trash are now original works of art, and they’ll be joined by more artwork soon.

“It’s nice to see something that’s useful also be beautiful,” co-creator Beth Holyoke said last Friday morning, at an unveiling of the three new tiled cans she created with Käthi Seidl. And according to Council member Brian Housh, the cans serve dual purposes.

“It’s an opportunity to repurpose the old cans and also beautify downtown,” he said.
Friday’s unveiling ceremony was the culmination of the first phase of a project that started two years ago when Holyoke and Seidl proposed covering previously used trash cans with original tiles. The local artists, who have collaborated on public art projects for a decade, heard that the downtown green and yellow cans were rusting out at the bottom, and would be replaced. They knew the Village still had old cans covered in aggregate in storage, and were interested in seeing the old cans reused.
The artists, who specialize in working with clay, also wanted to create something they hadn’t seen before — trash cans covered in original tile art.

Especially attractive to the artists were the aggregate surfaces of the old trash cans, which had remained in storage since being taken out of commission only a few years ago.

So the women created, for free, a model can, which sits outside Current Cuisine and is adorned with whimsical tiled opossums crawling over the surface.

“We used opossums because they’re scavengers. They eat garbage,” Seidl said.
However, the can received a lukewarm reception from Village management at the time, so the idea was put on hold. It resurfaced this summer when new Village Manager Patti Bates became aware of the need to somehow replace or refurbish the current cans. Council tasked the Public Arts Commission with recommending a solution, and several options were considered.

Making the decision easier was the fact that the cost of purchasing trash can liners for the current cans, or purchasing new cans themselves, was comparable to the $1,150 estimate per pair that Holyoke and Seidl suggested for creating original tiled art on the old cans.

“We all agreed it was a great way to go,” Housh said. “The beautification of downtown was a big selling point.”

And according to Bates, she supported the art cans because the cans are “quintessentially Yellow Springs,” and because the cost of the various options was comparable.

The PAC recommended to Council that the Village move ahead with a pilot project of three pairs of cans (a regular can and a recycling one in each pair) for a total of six. Council agreed, and last week’s event unveiled the three latest completed cans, bringing the total to four. However, the tiles for the remaining two cans in the pilot project have been completed and just need to be affixed to the cans, Holyoke said.

The new cans, all on the east side of Xenia Avenue downtown, include a celebration of storks, just outside the Sunrise Café, and an ocean-themed can outside Dino’s. A newly tiled recycling container rounds out the completed group, and now sits outside The Winds Cafe. The recycling cans, while also tiled, have a stucco exterior, fewer tiles, and the word “Recycling” circling the can, to make it immediately obvious where people should deposit their recyclable trash.

So far, the art cans’ theme is images from the natural world, the artists said. But they also value spontaneity, and their ideas emerge during brainstorming sessions.
“Ideas aren’t a problem,” Holyoke said. “We have lots of ideas.”

After nailing down an idea, the artists visit the local library to view images, then create the tiles for their own vision, using special freeze-resistant clay. During the process of creating the first can, they were surprised at the amount required to fill the can’s surface space, and had to keep making more tiles. The process has taken about a month per pair, working about 30 hours a week.

While the pilot project is drawing to a close, there are still 15 pre-used aggregate cans in storage, according to Housh at Monday’s Village Council meeting. If the Village continues to fund the project, the total cost would be about $8,000, Housh said.

However, given current budget constraints, Council members suggested that before the Village takes on more cost, alternative sources of funding, such as local foundations or businesses, be explored.

Holyoke and Seidl are ready to continue their art can project, if the funding emerges. So far in Yellow Springs, they’ve created two memorial tiled benches (on the bikepath in honor of Doug Scott and at the library in honor of Harold Fishbain), the free-standing “couch” on the corner of Xenia Avenue and Corry Street and the Springs sign that welcomes visitors at Bill Duncan Park.

“We like to do things that are out in public, that get everyday use, instead of keeping art in galleries,” Holyoke said.