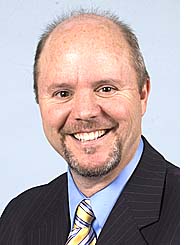 Tom Brookey has served Antioch College since before it became operational in its most recent reincarnation. Brookey was the college’s business, operations, finance, information and HR director before those positions were officially created. He preceded College President Mark Roosevelt, and he wore more hats than just about anyone to help bring the college back to life, according to Andi Adkins, Antioch’s current vice-president of finance.

After five years of dedicated and broadly scoped work, Brookey resigned from the college last month, going quietly and unexpectedly but not without note.

“Tom helped get the new college off the ground and helped it to grow by being willing to step up wherever he was needed,” Adkins said. “We’re very grateful for his service.”

Brookey did not return calls for comment last week, and colleagues were notified of his leaving via email. His departure as one of the college’s 14 senior leadership members means another new face will soon be added to an administrative team that has welcomed four new people and three newly formed positions over the past year. Adkins herself took over Brookey’s former finance job about a year ago, Lori Collins-Hall came in as vice-president for academic affairs, Hassan Rahmanian stepped out of that position to take on the role of dean of global education, Jennifer Jolls became vice-president for external relations, Luis Rosa came in as dean of community life, and Mila Cooper was recently named the new director of the Coretta Scott King Center. The college is currently engaged in a search for a chief human relations officer to replace Brookey, who supervised one other position. Interviews are going on now, said Adkins, who aims to have the position filled sometime in January.

Brookey joined the college staff in January 2010, when Matt Derr was still acting president of an institution that had just reopened the year before and still had a year and a half before welcoming its first class of students. Brookey started as chief financial officer but was constantly adding or filling in responsibilities as needed, serving, for instance, as liaison for legal matters, negotiating vendor contracts, overseeing construction projects, and creating and managing an IT department. With personnel, Brookey also hired and supported the development of employees and helped to launch a student employment program.

He was “the go-to person for just about everything on campus,” according to Adkins, who said that Brookey was hired as a “generalist,” and he was very good at it.

In the beginning, with limited resources, the college hired a lot of generalists to perform multiple tasks. However, now that the college has grown to 125 employees and 240 students, more specialists are needed to execute the functions of each department in a way that conforms to standard practice — especially practices recommended by accreditors at the Higher Learning Commission, Adkins said.

“We’ve got a year and a half to accreditation, and we want to make sure we have professionals who are trained to handle federal financial aid forms, for example, and Title 9 forms — things that require a great deal of skill and expertise,” she said. “When we replace Tom, it will be with someone with a different skill set.”

Adkins gave the example of faculty member Louise Smith, head of the theater department at the college pre-closure, who was rehired at the new Antioch as the director of community life. Smith stayed in that role for about three years, before taking a hiatus and returning this year as associate professor of performance.

“That was another example of someone who was willing to roll up their sleeves and do what it took to get that function off the ground, and she did very well at it,” Adkins said. “As the requirements of the HLC have become more crystallized, it’s become clear that we need professionals who are certified for their positions.”

While administrative positions have continued to shift, faculty positions have not wavered beyond the rate of any comparable institution, according to Dean Collins-Hall this week. This year the college lost three of its 25 tenure-track faculty members, all of whom left for positions at other institutions or for personal reasons unconnected to the college. Because the college is so small still, the losses were “powerfully felt,” she said. But the college gave one-year contracts to visiting faculty and is currently conducting national searches to replace one psychology professor, a professor of visual arts and a language coordinator. In line with comparable institutions, there are faculty search committees for each position that will review the applications (due Jan. 16), get student feedback on finalists, and hopefully fill the positions by the spring, Collins-Hall said.

Faculty committees are also in the final stages of evaluating two candidates for tenure, one of whom has already been notified of his or her status. Those tenure awards will be announced sometime in January, Collins-Hall said.