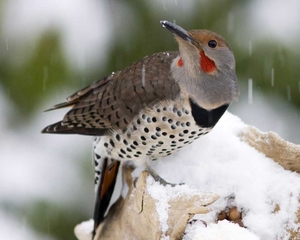 One northern flicker was found during this year's Christmas bird count. (photo courtesy of the Audubon Society)

On the next day of Christmas, nature gave to us, 268 Carolina Chickadees

The results of the Greene County Christmas Bird Count read like an ecstatic version of the 12 Days of Christmas, in which nature was so generous she continued well after the 12th day with 13 Eastern Towhees, 14 Eastern Bluebirds, 21 Northern Flickers, 72 Dark-eyed Juncos, 190 Rock Pigeons and on to 980 European Starlings.

The annual reporting event was organized by the Glen Helen Ecology Institute on Dec. 14. According to GHEI Director Nick Boutis, while many of the volunteer birding groups reported “a fairly slow day in the field … we were able to hit more sites within the count circle and ultimately found more species this year than ever before.”

Within the 15-mile count radius around Yellow Springs, including John Bryan State Park, Clifton Gorge State Nature Preserve and other Greene County parks, the group saw 57 different species and a total count of 4,989 birds, twice as many as last year.