Working on a ‘network of peace’ 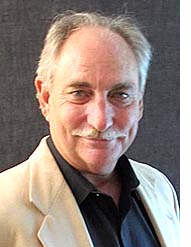 Former longtime villager and founder of the Dayton Peace Museum Fred Arment recently published “The Economics of Peace: Freedom, the Golden Rule and the Broadening of Prosperity.” The book was published by McFarland. (submitted photo)

The world may seem full of turmoil, disharmony and injustice, but peace worker and longtime village resident Fred Arment is hopeful about the future. In fact, he sees “an epic shift” already under way.

The founder and director of International Cities of Peace and a founder of the Dayton International Peace Museum, Arment has met and talked with people in all walks of life around the world, and his experiences suggested that something substantial is taking shape on a global scare.

“Arab Spring, the Occupy Movement, the Tea Party” were manifestations of the new shift, but “they never expressed what was next,” he said this week. That question — “Where do we go from here?” — sent him on a two-year exploration that has resulted in a new book published by McFarland: “The Economics of Peace: Freedom, the Golden Rule and the Broadening of Prosperity.”

The Beavervcreek native pursued a career in advertising before taking early retirement in the mid-90s and focusing his attention on working toward peace. He was one of the core group of area residents who got the peace museum in Dayton off the ground; and in 2009, he founded the nonprofit International Cities of Peace, an initiative that combines grass-roots efforts with municipal government action.

The organization’s basic mission is to work with cities around the world “to sign a document that they will work for a culture of peace in their communities.” The group’s current board of directors hale from four continents, and more than 100 municipalities have agreed thus far to participate, “creating a network of peace,” Arment said. A recent project started by women in Burundi, which they call Eight Goats to End Poverty, is one example of the work being accomplished through the network, he said.

In his work with the International Cities of Peace organization, Arment said he sees that, “Everybody wants justice, but in terms of political and economic justice.” The challenge, then, is “how our economy is going to evolve and how our political system is going to allow that to happen.”

His book utilizes case studies of various approaches and methods, and his findings may surprise some readers. Particularly surprising is one source for answers – major companies and corporations. In Arment’s analysis, large corporations aren’t necessarily a problem, as might be thought by some voices in peace-related circles. “Money-controlled legislators pass laws that favor one (corporate entity) over another,” and that’s where conflict arises, Arment said.

Backing up a bit: “The fundamental idea (of the book) is that we have an ancient ethic that we’re not utilizing in the formation of our economy and government, and that is the Golden Rule,” Arment said. “It’s the prime ethic of humanity … the common maxim of every religion. And the Golden Rule is the basis for human rights and the basis of our Constitution.”

But in separating church and state, Arment said, the U.S. also separated the state and ethics.

“What I found was that the economy is moving toward the Golden Rule more rapidly than our government. You can see it most vividly in some of the technology companies. (The late) Steve Jobs (of Apple) is very iconic for many reasons, and his desire to create products that he wished others would create for him was a restatement of the Golden Rule. … The customer is primary.”

The government, however, is lagging behind, Arment said. His point of entry for making a change is through the judicial system. “Without principles of justice, the consent of the governed cannot be given,” he said. “Without perceptions of fairness,” violence can result. The judiciary is where fairness should be found, and it’s within our ability to secure it.

Part of his research involved seeking out books written about the Golden Rule, but he says he didn’t find many. “People assume that the Golden Rule is a child’s ethic,” but it is very deep, he said.

“There are four different processes for mastery: Empathy, compassion, engagement and unity.” A future of peace, he said, is when “these four processes can be expressed in the economy and our government.” His book is an attempt to show how that might happen.

Arment’s “The Economics of Peace: Freedom, the Golden Rule and the Broadening of Prosperity,” is available at area bookstores in softcover as well as on Kindle and Nook.