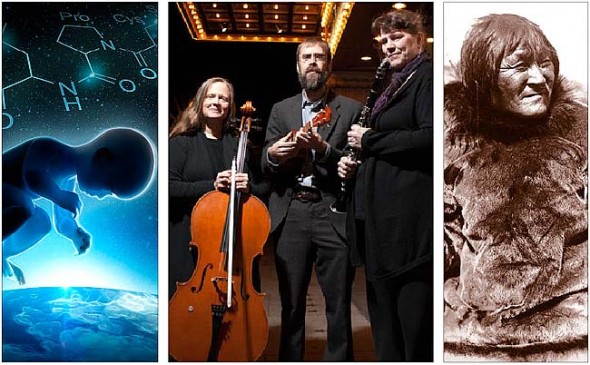 The Little Art Theatre kicks off a week of special film events this weekend. On Sunday, Jan. 11, a free screening of “Microbirth” will take place at 1 p.m. At 7 p.m. that evening, “Nanook of the North” will launch a four-part documentary series, with Antioch College media arts professor Charles Fairbanks introducing the film and leading a discussion afterwards. On Thursday, Jan. 15, at 7:30 p.m. the New River Ensemble, comprised of Lisa Liske-Doorandish, Brendan Cooney and village native Martha Hyde will perform Cooney’s original score to classic silent films. (Submitted photos)

Villagers, do not despair. Help is on the way. In fact, it’s already arrived in the form of the Little Art Theatre. During this deep, dark, cold month of January, the renovated theater is exploding with new and interesting programming that seeks to educate, inform and entertain you. So come on inside.

“I don’t think we’ve ever had so much going on in one week,” Little Art Executive Director Jenny Cowperthwaite said this week, surveying the events that begin the weekend of Jan. 10–11. “It’s a lot to choose from. I hope people will try something new.”

Since its reopening a year ago September, the Little Art has worked hard to broaden its programming, according to Cowperthwaite. The nonprofit theater seeks to be self-sustaining, and while it has a devoted core audience, it also needs to develop new audiences.

“Our goal is to get more people to come through the door,” Cowperthwaite said.

This week’s events include a free film and panel discussion on childbirth; the kick-off of an Antioch College classic documentary film series; and a live musical group performing original music to the films of Keaton and Chaplin. Oh, and let’s not forget the theater’s two regularly scheduled films, “Citizenfour” and “Rosewater.”

On Sunday, Jan. 11, villagers can see the first in the series of four classic documentaries shown by Antioch College media arts faculty member Charles Fairbanks. “Nanook of the North,” the 1922 silent documentary directed by Robert Flaherty, will be shown at 7 p.m. Tickets to this screening, as to all films in the series, will be $5, and the community is invited. Fairbanks will offer historical context to introduce each film and also guide a discussion following each screening.

Organized by Fairbanks, the series consists of four documentaries chosen because, while they are very different in style and content, they have all influenced documentarians for generations, he said.

Fairbanks chose the 1922 “Nanook of the North” as the first film because it was both one of the first documentaries and also one of the most important, he believes. Specifically, the filmmaker spent years immersed in the lives of the Inuits who are the film’s focus, and then created a narrative arc with which to tell their story.

“It’s a dynamic film that moves us in the way that feature films more often do,” he said.

The film tells the story of Inuit hunter Nanook and his family as they struggle to survive in the harsh Canadian Hudson Bay region, and is “a cinematic milestone that continues to enchant audiences,” according to the Criterion Collection.

Considered by Sight and Sound Magazine as “the Greatest Documentary of All Time,” the film, immediately controversial, was then ignored for decades until being rediscovered in the 1960s. Since then, according to a press release, its influence can be seen among many documentaries, experimental and feature films. Though the film is considered “silent,” it has a soundtrack of musicalized sirens, crying babies, barking dogs and more, recorded in 1995 by the Alloy Orchestra.

• Considered by many to be the first feminist film, the 1970 documentary “Growing Up Female” will be the third in the series. The screening takes place Sunday, Feb. 8 and 15 at 7 p.m. Local filmmaker Julia Reichert, who made the film in 1970 with her partner, Jim Klein, will speak.

The film portrays the lives of six girls and women, including the institutional forces that shape their identities.

According to the late film reviewer Roger Ebert, “Waltz with Bashir” is a “devastating animated film that tries to reconstruct how and why thousands of innocent civilians were massacred because those with the power to stop them took no action.” Fairbanks views the film, which is animated, as “a great example of what documentary filmmaking could be in the future.”

Cowperthwaite is especially pleased to be collaborating with Antioch College in presenting the documentary series.

“These films fall right into what we want to do as an educational piece,” she said. “And I love partnering with Antioch.