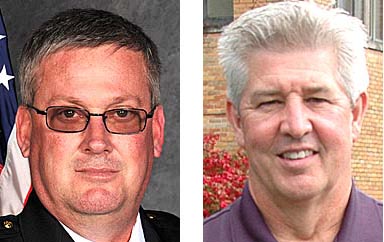 The two finalists for Yellow Springs police chief met their last rounds of interviews last week, including a public interview with each candidate, Xenia Police Captain David Pazynski and retired Montgomery County Major David Hale, who is current interim Village police chief. At the close of both interviews, Village Manager Patti Bates announced that she planned to think about her decision over the holiday week and inform Village Council and the candidates of her selection on Friday, Dec. 26.

On the subject of what villager Robert Harris called community policing and the rehabilitative value of incarceration, the two candidates had different things to say. According to Hale, there is a general need to get away from “factory” policing by quotas by returning to community policing. Police getting to know people personally and getting involved in the community is a much better crime deterrent than creating fear and alienating people, he said, and while some people may need to be disciplined or incarcerated, the punishment should not be expected to rehabilitate.

“You can’t help people until they want help. You can only help people when they’re ready to get help — that’s when it’s effective,” he said.

For his part, Pazynski said he didn’t believe in the term “community policing” but preferred to call it local policing, which involves everyone in the community working together to solve the problem. The recent policing forum and the Human Relations Commission are examples of the things that bring people together for community problem-solving, he said, and getting police command and staff talking to people in the neighborhoods, in the schools, and at local coffee shops — “that’s what local policing is all about.”

In response to villager Joe Lewis’ question about the most critical incidents they had faced in their careers, Pazynski declined to go into detail about several accidental deaths he had witnessed, though he said he felt the incidents made him more aware of safety tips he could then pass on to his officers and the public.

Hale recounted one story as a new officer when he responded to an active shooter at a residence and the two traded off several rounds of shots before Hale killed the offender. He also recalled finding a dead child who had been abandoned at a rest stop in London, as well as writing search warrants, kicking in doors and all the duties that go along with being a critical responder.

Villager Kate Hamilton asked about the potential for police to learn about and apply restorative justice techniques and focus on de-escalation, crisis intervention and acting as peace officers instead of military might. According to Hale, statistically, citizen shootings by police happen very infrequently, however, because of high profile events this year, the Ohio Police Officer Training Academy is “scrambling to look at some new ideas” on how to emphasize peace officer trainings. Minority hiring could help, but it’s difficult to find minorities who want to be police officers, he said. Regarding decriminalization, police can use Mayor’s Court and work with people, especially if they’re young and there is no victim or video recording of the incident, to keep them out of jail. But restorative justice is the job of the courts, he said.

Pazynski agreed, saying that asking police to hand out the justice they enforce is unfairly asking police to “be judge, jury and executioner.” Pazynski said he had a “firm belief in officer discretion” and using warnings instead of tickets as a useful tool.

“A significant number of people mistrust police, and the only way to change that is to change the function and what police are doing,” he said. “I’d love to get back to where the village was (in Jim McKee’s day), but I’m not sure how to do that.”

Even Pazynski, who is half Columbian and fluent in Spanish, has found it difficult to hire minorities in Xenia, especially among the African-American community where “anybody who wants to be a cop is labeled a snitch.” The most effective antidote is to help kids lose their fear by getting officers in the schools, having cruisers follow the buses “so kids see that police officers are there to help.”

Villager Sue Abendroth asked how both candidates would straddle the “dual” existence between protecting the village from outside influence and respecting the unique Yellow Springs culture. According to Pazynski, it’s the needs of the village that come first.

Police nationally need to listen to what people want and evaluate their current practices based on that feedback, he said.

Hale said he believes the village has very good officers who with good training will do fine in both roles.

Villager Chrissy Cruz asked David Hale to explain the qualities he brings that would help villagers overlook the fact that he doesn’t live here and his recommendation to stay with the Greene County drug task force, in opposition to the preference voiced by many villagers.

The fact that such a large proportion of the crime police deal with, including the symptoms of chronic mental illness, paranoia, aggression, hallucination and violent encounters, stems from drug abuse, makes Hale a believer in doing whatever possible to deter the practice. Beside the fact that it’s his job to uphold the law, reducing drug abuse reduces crime on the street, he said.

Joe Dowdell asked, “Why Yellow Springs?” and what Hale had learned in his three months here about what the village needs. Hale said that he had a lot of experience but not a lot of degrees, so when he had a chance to lead a whole department here, it was a new opportunity, and he seized it. In his time here, Hale has seen the need for updated general orders and dispatch manuals, a schedule for crisis intervention training for every member of the department, training opportunities for the chief, better shift coverage, training to use the department’s new reporting software, and a strong mentorship system.

Pazynski said that village culture reminded him of his hometown of Madison, Wis., and though he and his wife, a nurse, couldn’t afford to live here, they live close by on Trebein Road and always considered Yellow Springs “a gem.”