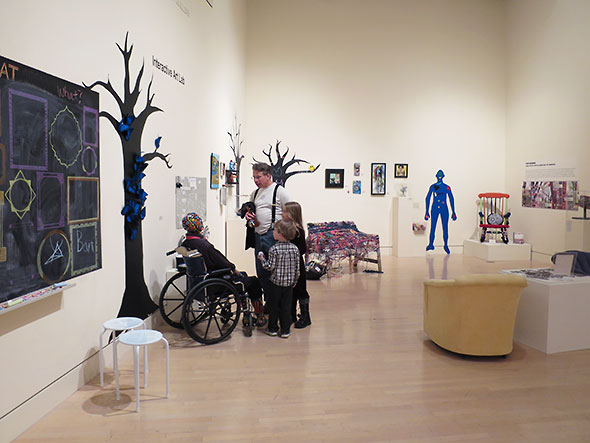 My daughter’s art collection began before she was born. At a jungle-themed baby shower two months before birth, a family friend presented her with an acrylic folk painting that our friend had produced herself. The painting captured a brightly colored parade of wild animals as they marched single file through the rain forest. A golden-maned lion led the parade followed by a lanky giraffe, a knobby-kneed ostrich, a zebra, a blue rhinoceros, and a plump purple elephant. We hung the picture at the foot of our daughter’s crib. As she took notice of the curious procession, Jeremy and I named the animals for her—one by one—voicing each critter’s triumphant cry. 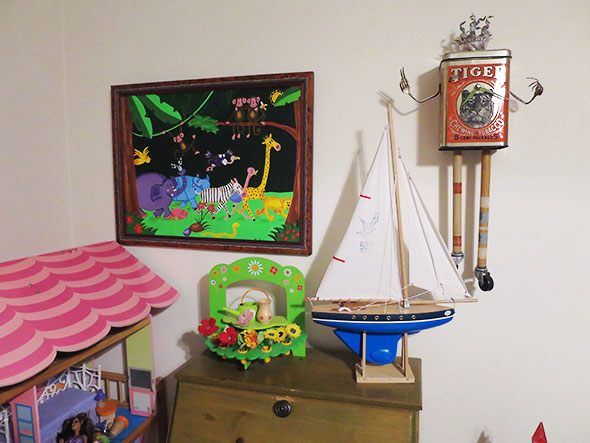 Just before our daughter turned two years old, her father discovered a new painting by Nancy Mellon while exploring the Village Artisans, 100 Corry Street. Jeremy was immediately taken by its liveliness, the folk art sensibility, and far-streching scene. For him, the scene evoked the farmland of his childhood home in Illinios. He bought the artwork and gave it to our daughter for her second birthday. We hung the picture near the head of the crib and twittered over its details in the evenings as we settled our daughter into bed. 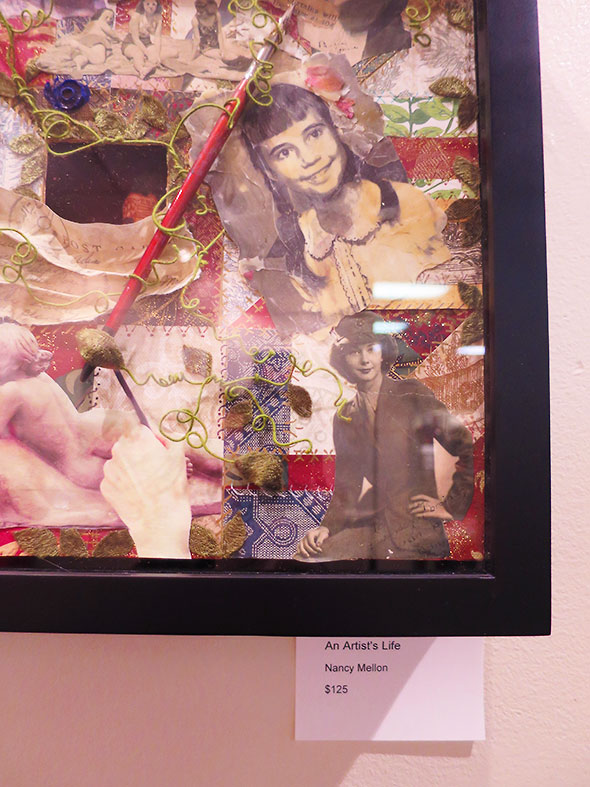 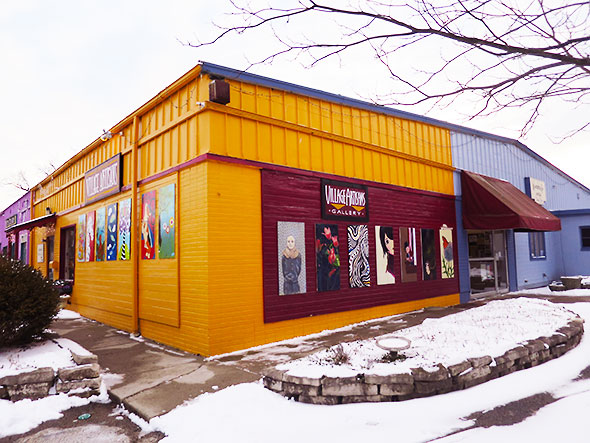 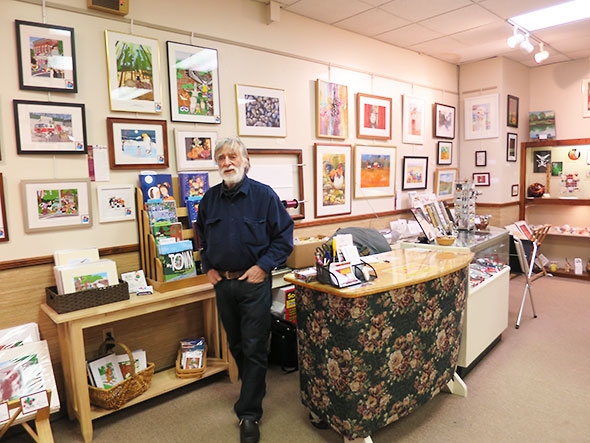 As a family, we love this painting. Separately, though, it speaks to us. My eyes are drawn to the picture’s foreground. A river over-brims a crop field much like the meandering Susquehanna River overran the banks around the bend from my own childhood home. A watermelon—cut like a Moses basket—floats by a curly haired calf as the cow wades among a sea of sunflowers. From the beginning, our daughter’s sharp eyes caught the more intricate details of the painting. With a word she would orient me to all that I had somehow missed. “Bird”: Look at the blue birds picking the ground on the far hill. “Woof, woof”: Wait, that puppy is perched on top of her dog house. “Elly”: Hey, isn’t that an elephant treating herself to the fruit of an apple tree? At first glance, whimsical and idyllic though, at second glance, troubled and wise, Mellon’s “Blue Bird Hill” reads like a collage of childhood memories, both real and imagined. It is the work of a interlope tangling mischief in a soup of serene. 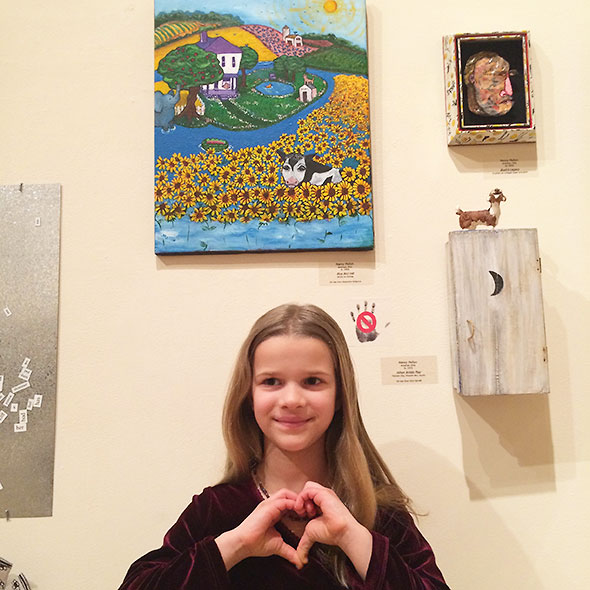 Rascal is a fitting word for Mellon. As the JafaGirls, Nancy Mellon and her partner-in-art-mischief Corrine Bayraktaroglu have been tweaking the village of Yellow Springs with mixed media street art since 2005. Seeking to improve public space and community dialogue through their own breed of activism, the JafaGirls have received international recognition for their work…recognition which manifested itself locally in a partnership with the Springfield Museum of Art. Funded by an arts education grant from the Institute of Museum and Library Services, the Springfield Museum of Art asked the JafaGirls to design the first interactive art lab for the museum. Mellon and Bayraktaroglu were elated at the opportunity and worked diligently to meet the challenge of the major installation. 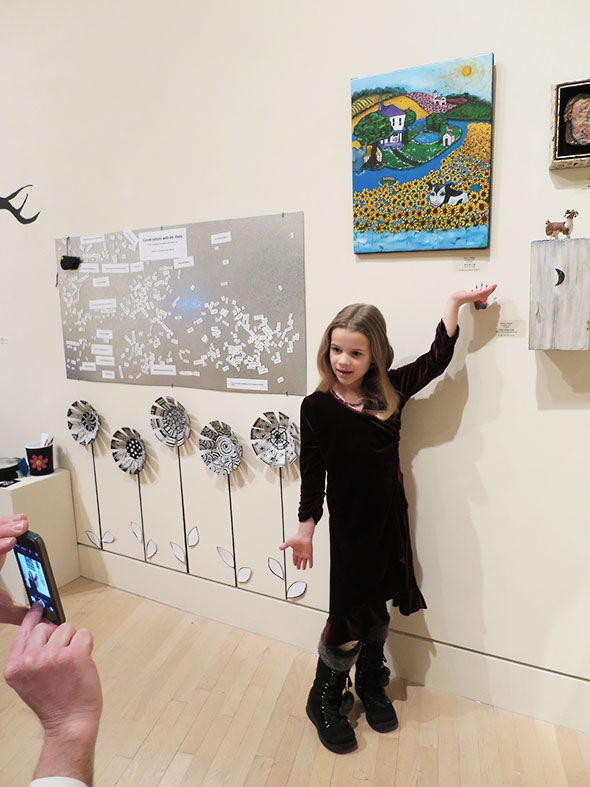 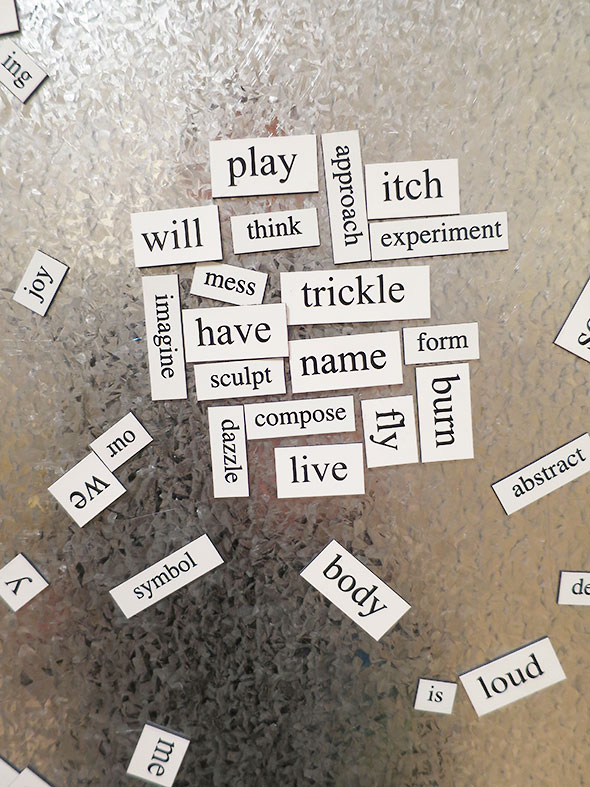 Within the interactive art lab, Mellon and Bayraktaroglu have set selections of finished artwork aside blank canvases, frames, and raw materials. The invitation to the visiting public is to play off the same crafts and concepts through which the JafaGirls work. When my husband met up with Nancy Mellon this fall, they discussed the project while it was still in its planning stage. Mellon asked if our daughter would be open to loaning Blue Bird Hill for the art installation. When my husband brought the proposal to the evening dinner table, we were all struck by how rare and fun the experience sounded. It sounded glamourous even. Our seven year old pledged the painting on loan to the project, picked out a dress to wear for the occasion, and awaited the opening. 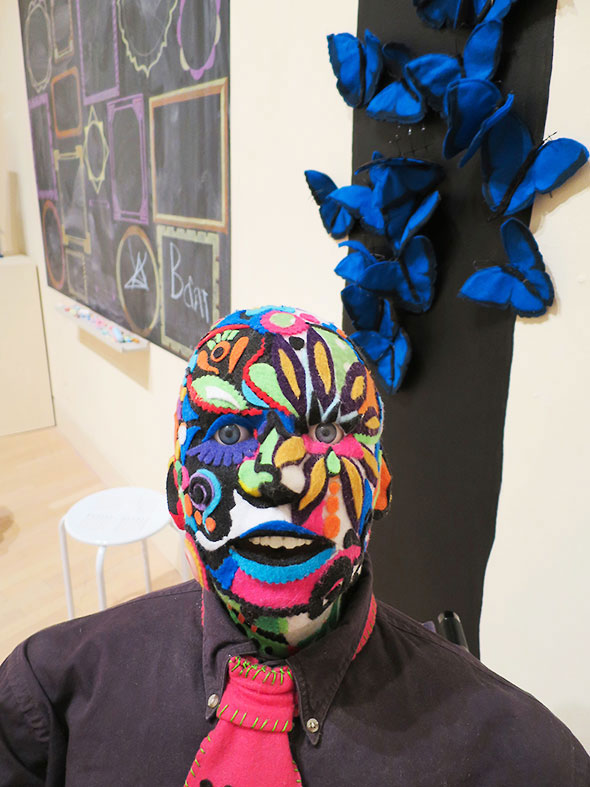 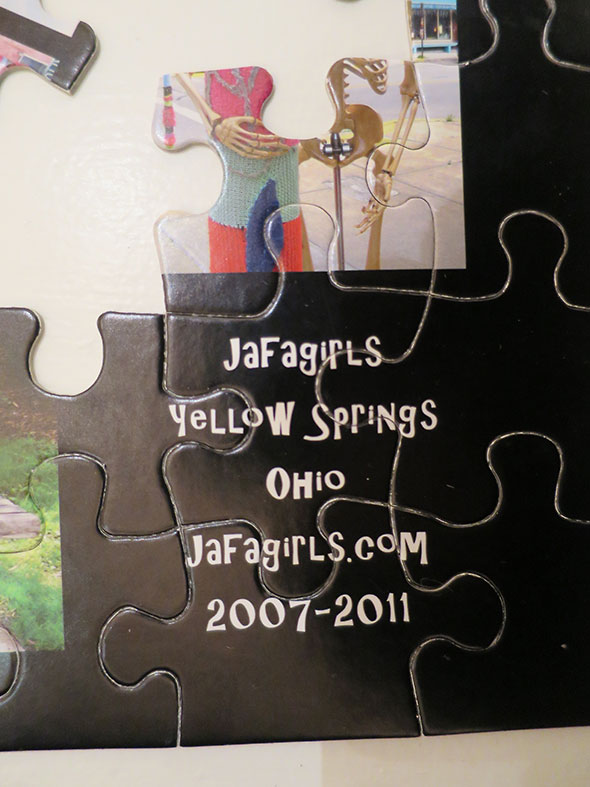 Over the month of December, we watched Bayraktaroglu and Mellon post progress as the installation progressed. The artists painted “chalk trees” on the gallery walls with blackboard paint and supplied chalk of many colors at their base. The JafaGirls set up a word garden where visitors construct patterns and prose on a metallic sheet using magnetic poetry tiles. Below the tiles, they fashioned black and white flowers with blossoms the size of cantaloup. The installation includes mixed media pieces—most prominently Mr Plato, a felt covered resuscitation dummy. Mr Plato sits in a wheelchair and looks up at those who enter the room with an unblinking, uncanny stare. Across from Mr Plato, a bright blue silhouette stands nonchalant. A bin chocked full of felt pieces rests at the silhouette’s hip tempting newcomers to dip into its content. With encouragement, they add dimension and dynamics to its visage so that it might rival the impressive Mr Plato. 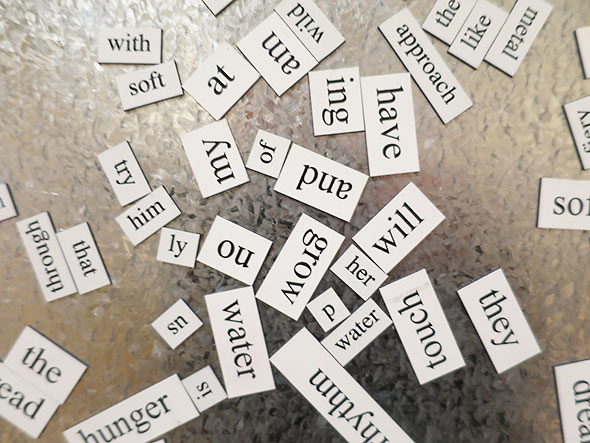 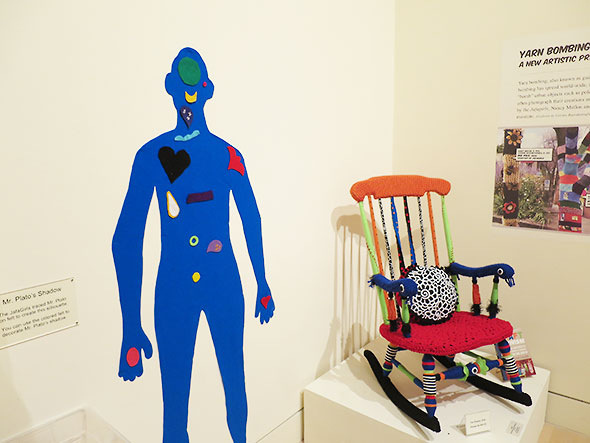 We missed the Interactive Art Lab’s opening but visit on 25 January for the kid-friendly Come Find Art. No longer confined to a windowed perspective, we can now take in the entire room, all four walls of the laboratory. As we enter the room, I can see blue and black felt butterflies which must have fluttered north from their favorite sycamore tree in downtown Yellow Springs and come to rest on one of the chalk trees. On the same wall just a pinch farther north, a familiar sight greets us in cheerful tones. Blue Bird Hill sits between two chalk trees, and the curly haired calf winks at us from the sunflowers. 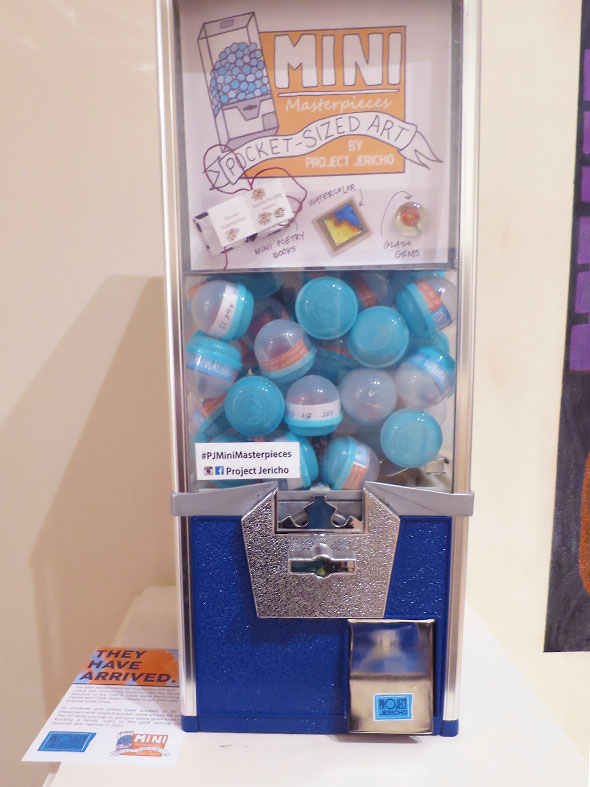 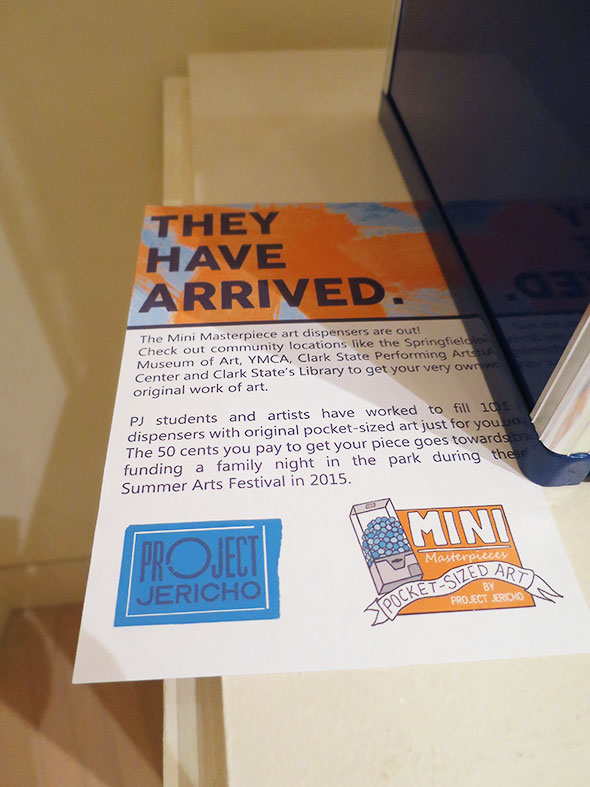 On top of Blue Bird Hill, we find Art and enjoy a most adventurous playdate in the rascal’s company. We work puzzles, weave threads, then chalk up the walls. We felt and patch poetry in firework bursts. Intrigued by a vending machine filled with blue capsules, we scrap together four quarters—enough to spin the dial twice—and collect two mini masterpieces from Project Jericho. The kids remove the blue-capped capsules from the dispenser and shake them next to each other’s ear before opening them with a pop. Our daughter’s capsule rattled with a bottle cap ring inside, our son releases a white square tile embellished with a exploding dark star.

As we cross the art lab one last time before parting, we imagine Blue Bird Hill delighting the art lab’s fortunate visitors in the same way that Nancy Mellon’s art charmed us five years ago at the Village Artisans. Perfectly at home alongside the folk art exhibited in the adjacent museum gallery, the JafaGirls’ visceral brainstorms reach past the museum walls and touch us where we live, walk, and breath. This body of work invites us—even in the presence of trouble and doubt—to honor one another and play.