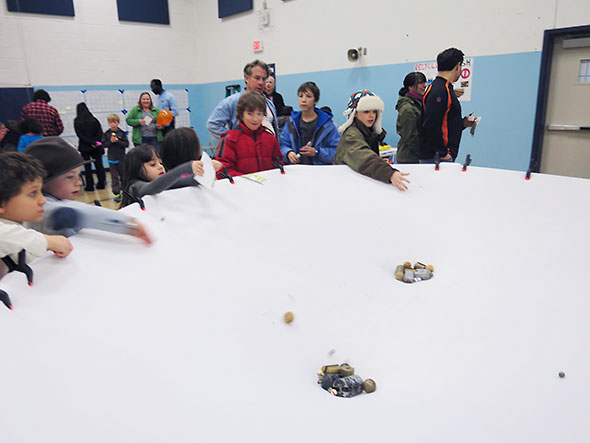 Once I passed the Curious George stage of hero worship, my champions turned out to be exceptional ambassadors of science. Sure, George earned a medal for riding a rocket into the upper atmosphere and parachuting back to Earth, but my ultimate heros—Spock and R2-D2—explored deep space with the kind of bravery and tenacity that left Curious George caked in moon dust. R2-D2, a demonstrative gear-driven Lassie, could charm the bolts off a battleship. Built on the scale of a child, we met when I was eleven years old, and I’ve often imagined the awesome adventures Artoo and an adolescent Princess Leia had in the early days of the rebellion. Mr Spock imbued “science officer” with an alluring dignity. At a very young age, I picked up Spock’s habit of arching an eyebrow at curious developments. His expression of dispassionate incredulity narrowly escaped bemusement. Mockery wasn’t his thing. He remained ever earnest and engaged. I liked how he approached life with a scientific bent and mathematical inclination.

One of the great disappointments of my life is that George Lucas never managed to fashion a decent storyline fit for the precocious R2-D2 past the original Star Wars saga. Spock—played with an interesting blend of intensity and restraint by the remarkable Leonard Nimoy—was spared a similar fate. The character was deeply plumbed by the actor and by Star Trek creator Gene Roddenberry. Spock was always saving the day—and even the motion picture—within his own franchise and into succeeding generations.

My husband and I learned of Leonard Nimoy’s passing early Friday evening as we loaded supplies into the family car for Mills Lawn’s Math and Science Night. We were piling in pipes and planets, yards of white spandex, electrostatic chargers and spring loaded clamps. Meanwhile, our Facebook feed overbrimmed with tributes to Nimoy; some posted treasured memorabilia collected over decades of fandom. My husband and I found our own tributes at hand in the science demonstrations we were poised to share: Jeremy’s illuminated the invisible force of static electricity; mine simulated the warp of time and space due to gravity. 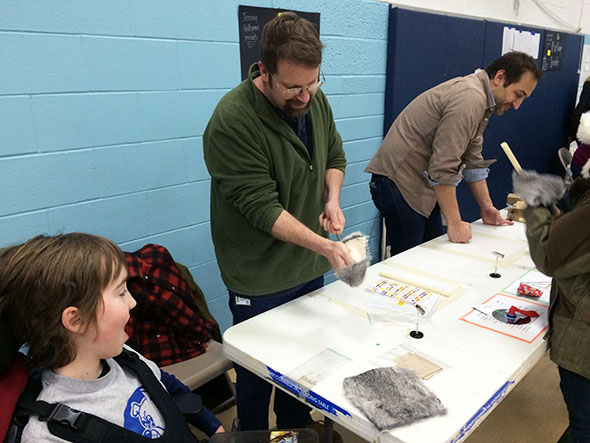 For the static electricity experiment, Jeremy had specially tooled supplies on loan from his physics laboratory. My setup was a kludge, a space-time simulator modeled after a demonstration posted by high school physics teacher Dan Burns. Mr Burns’ simulator requires a sheet of four-way spandex, a trampoline-like frame formed out of PVC pipes, and a collection of weights and spheres. Early February, I ordered a 120″ by 144″ spandex sheet—bigger than Mr Burns’ recommendation—from a theater supply company in New York City. Then, last weekend, I sent the following part list to Downing’s Do It Best Hardware, 254 Xenia Ave: 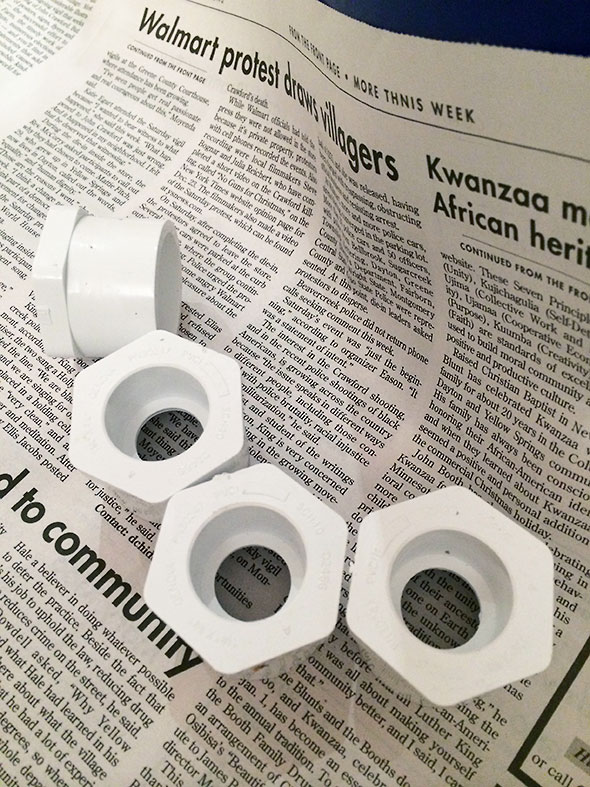 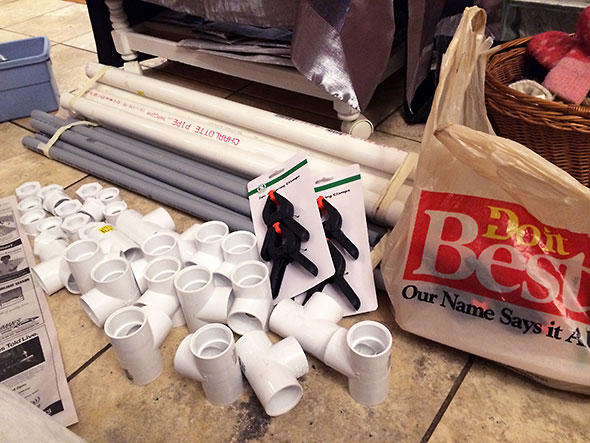 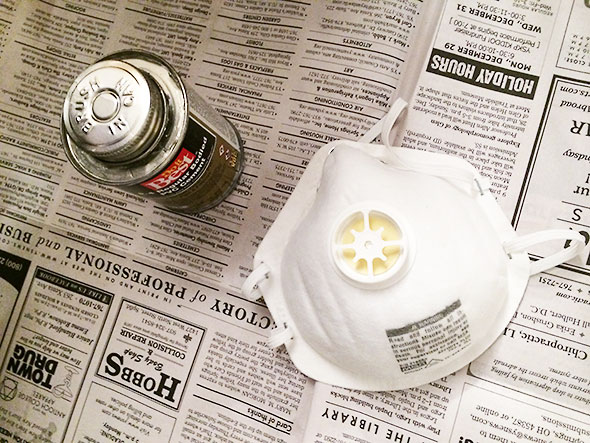 The folks at Downing’s were intrigued especially when I shared Mr Burns’ video describing the project. They cut the PVC pipes to spec and ordered connectors and clips. When my husband brought the components home, we laid out newspaper on the kitchen floor, donned masks to filter fumes, and began cementing connectors to pipe. Each pipe needed two connectors, and the orientation of the T-connectors mattered in particular. I found the best way to postion the connectors correctly was to balance the three part assembly—T-connector, pipe, T-connector—so that the connectors rested perpendicular to the floor and held the pipe a couple inches off the ground. Once in place, they formed a long, flat H. The cement locks the pieces within a second or two so my husband helped attach the T-connectors. He held the first T-connector flat to the floor while I gave the second T-connector its final orienting twist. The smaller connectors glue to the electrical conduit; their orientation does not matter so Jeremy was soon relieved of manufacturing duties. He put the children to bed while I completed a set of 7 vertical supports (white) and 14 horizontal (gray) plus spares. 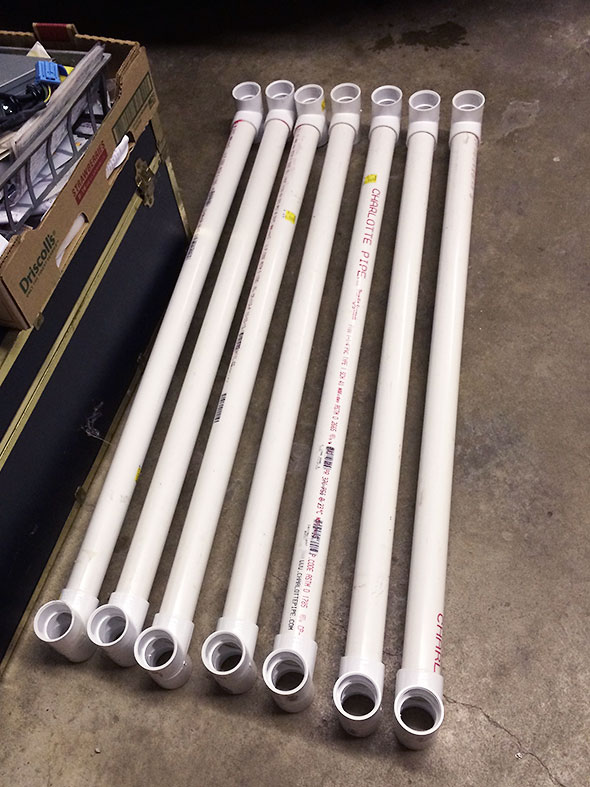 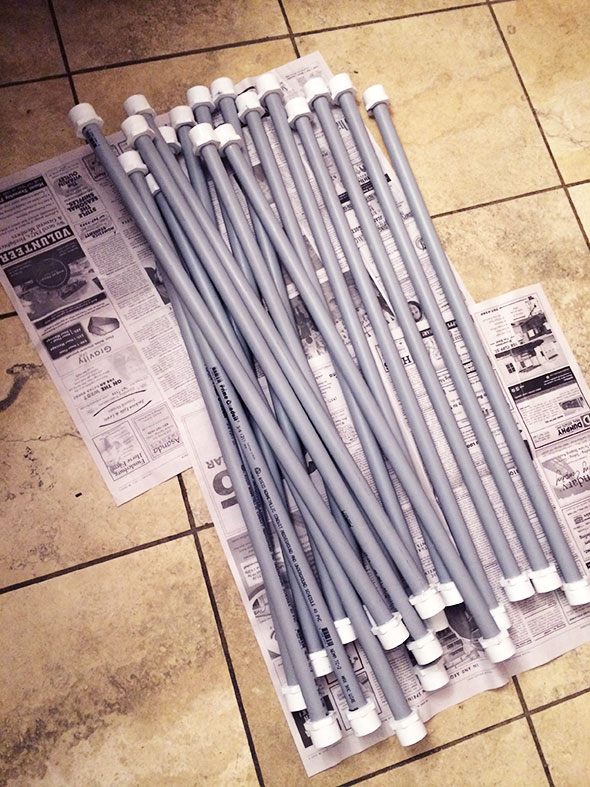 With the spandex and frame assembly gathered, I had the necessary components to model time and space but not the objects that would interact on the space-time fabric. For these objects, we borrowed several 500 gram weights and spheres made of glass, wood, metal, and cork. 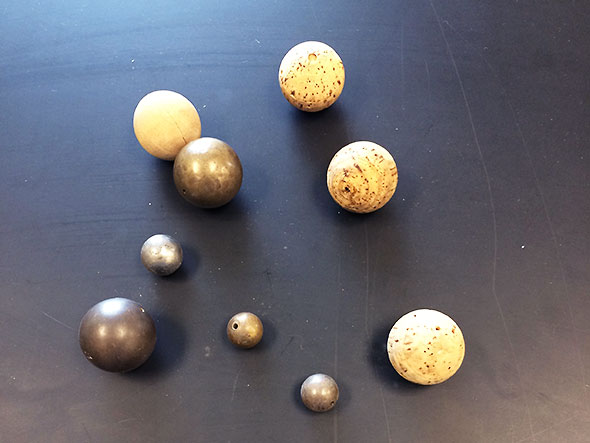 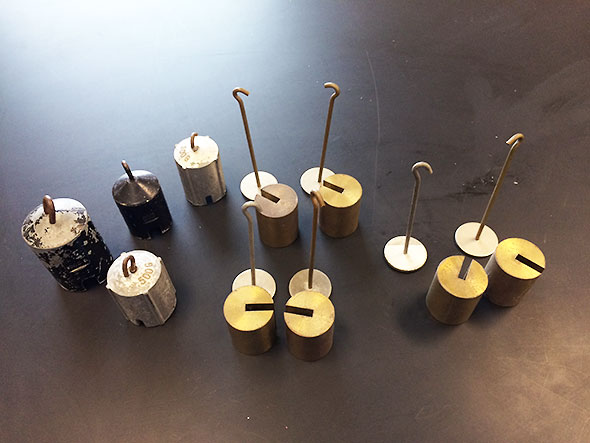 We arrived at Math and Science Night at 5:30pm Friday and unpacked the set of pipes first. I looked around for a couple of volunteers to construct the simulator’s PVC-pipe frame and, when I turned back, I found its assembly well underway. My four year old son had found his purpose and was diligently assembling the supports in the shape of a ladder. 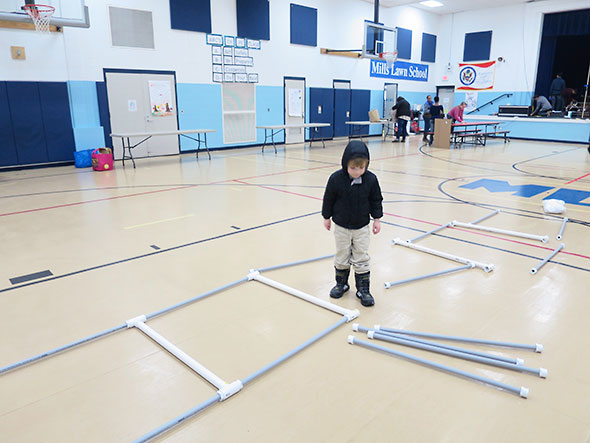 Ladder assembly complete, our son sped off to help his father unpack. Forces gathered—several tall men curious over the 21 foot lattice—and we turned the ladder on its side. Here, things got tricky. The ladder needed to be turned back on itself so that the gray conduit formed two circular hoops: one suspended a yard above the other by the white PVC pipes. Our attempt to form the cylindrical frame with 7 vertical supports ended in failure. We broke a T-connector. Curving the frame put the electrical conduit under intense stress so we regrouped. We attempted a slightly larger frame using 8 vertical and 16 horizontal supports. By adding another section, we increased the circumference of the frame and reduced the curvature on each length of electrical conduit. With a team of six people holding the interlocking pipes in place, Jeremy bravely stepped forward to closing the eight-sectioned loop and shimmy the ends of the ladder. We successfully morphed the frame from ladder to trampoline—indeed, its construction generated a hopping bit of excitement—and our next step was to spread the spandex overtop like a drum. 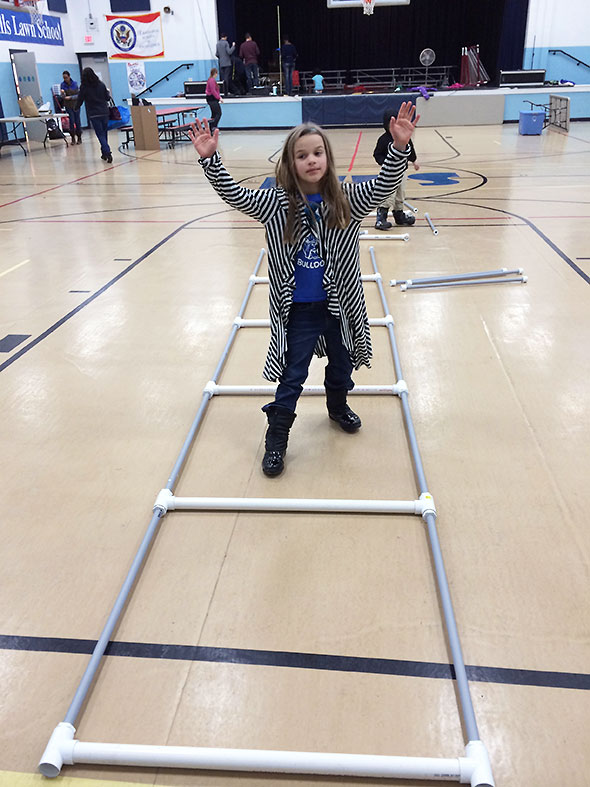 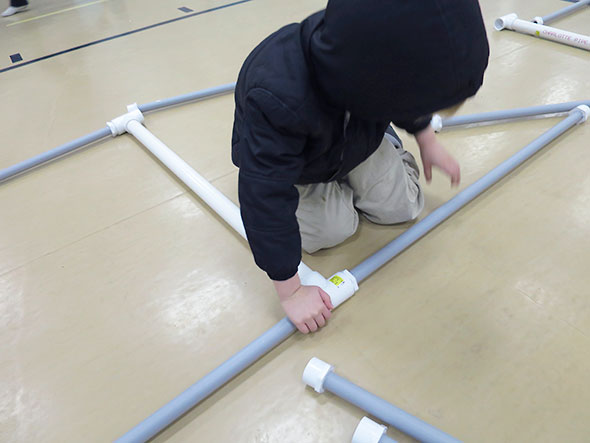 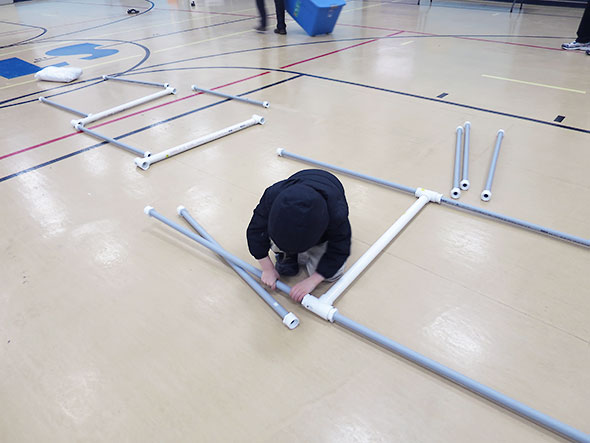 We draped the spandex over the frame and secured it in place with clips. Luckily, I had already deviated from Mr Burns’ design by ordering the large sheet of spandex. Our improvisation on the design meant that the supporting frame for the fabric now had an extra yard of circumference and an extra foot in diameter. No worries, though, I had planned for this contingency. We had plenty of material. 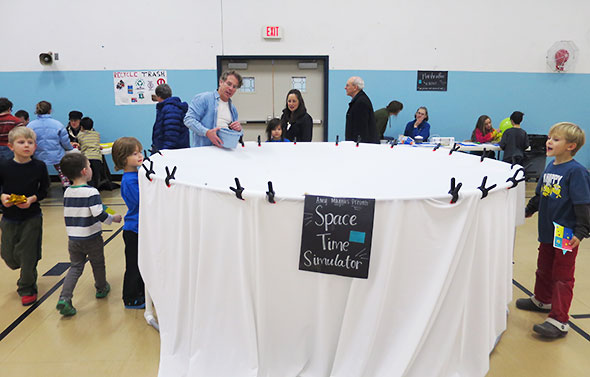 With the material stretch tight and clipped into place, we could begin the simulation. Children stepped forward asking what they could do. I set them about positioning the larger weights onto the stretchy fabric of time and space. As the mass dropped into place, we could see the fabric warp, or bend toward the mass. This warping of time and space by massive objects is how Einstein modeled gravity and predicted its effects.

I explained that the center mass represented the sun of a solar system and then handed out “planets”. The children dropped the spheres onto the spandex and watched them fall towards the massive “sun”. I showed them what happens when I try to pass a sphere by the sun on the fabric. A marble shot across the spandex; its path bent toward the central sun averted by the objects’ mutual gravitational attraction. I showed how the effect would change as I attempted to pass a planet by the sun at slower and slower speeds. At the right velocity, the shooting marble “planet” was captured by the sun and orbited the heavy object.

We played with different combinations: releasing the planets in groups about the simulated sun, watching pairs of satellites as they spun in orbit affecting each other’s path. When my husband joined us, he asked the children to separate the masses at the center of the simulator. Together, they then tested the gravitational effects of a two-star system and attempted sustaining orbits in the shape of a figure eight about the two central masses. 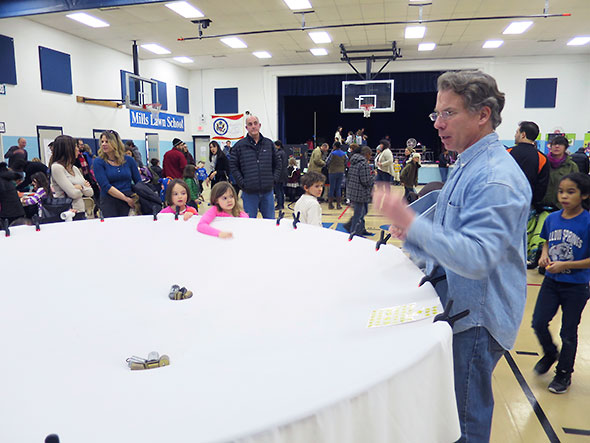 Jeremy relieved me at the Space Time Simulator for a spell so I could take a turn about the other demonstrations in the room. Students were hard but happy at work all about the gym and surrounding hallway. Down the hallway ramp that leads up to the school library, children were holding impromptu racing trials with hovercrafts made of balloons, pop-top lids, and compact disks. Young biologists munched on the various parts of plants—roots, seeds, stems, leaves, even fungi—and accepted bean kits to sprout at home. Surveyors took estimates of tall structures using right triangles and examined the dispersion of water through different soils. Kids watched fluffy marshmallows expand before their eyes under changing conditions of heat and pressure. 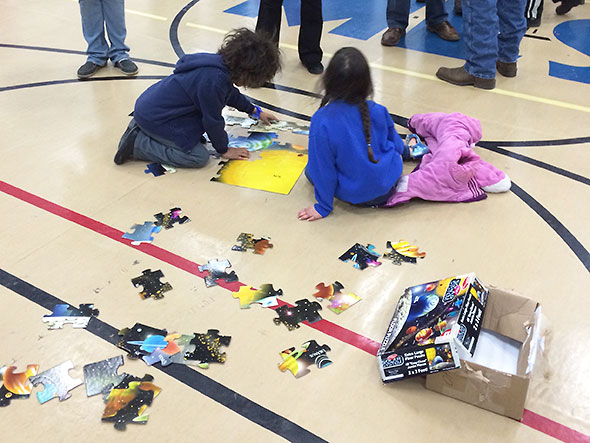 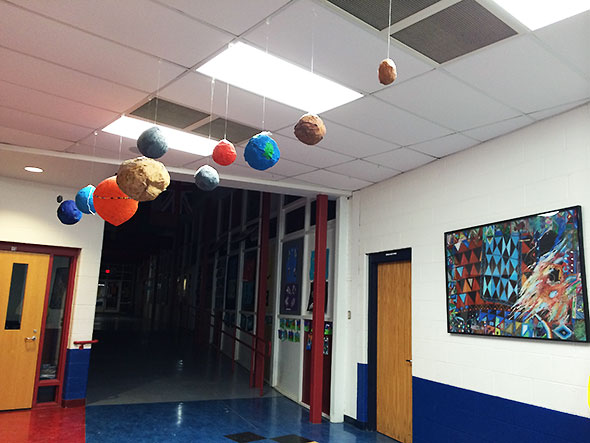 I returned to the Space Time Simulator to find my husband hosting a full cadre of astrophysicists. He was hoarse from answering all the questions pelting him. I gathered a few stray glass marbles from the surrounding floor and collected my thoughts as well. I was relieved that we’d managed to twist the frame—untested—into working order, grateful to Do It Best Hardware for setting us up for success, pleased that children and parents were playing giddily about the simulator’s perimeter and coming back for multiple turns, enthused that the whole room was filled with the bustle of unanticipated adventures. 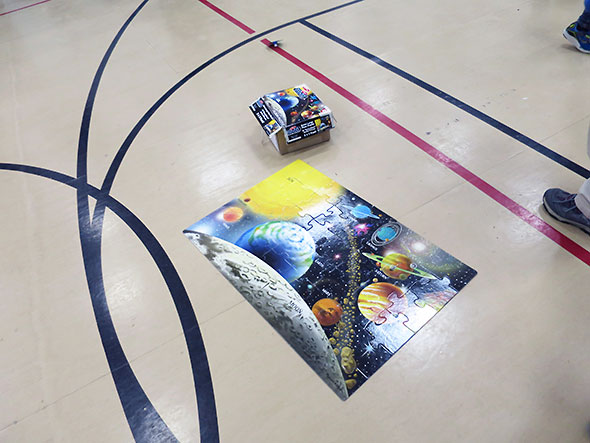 When I was a child, I was inspired by Mr Spock to look up and wonder. However, Star Trek gave me only an inkling about how very cool the universe is. At events like Math and Science Night, we discover as a collective—young and old—the mysteries of science in visceral form. “Live long and prosper”, Spock would say, offering the blessing of his people. To my ear he says, “Live bravely and long adventure.” To my children, I say, “Yes, choose wisely. Go, explore.”