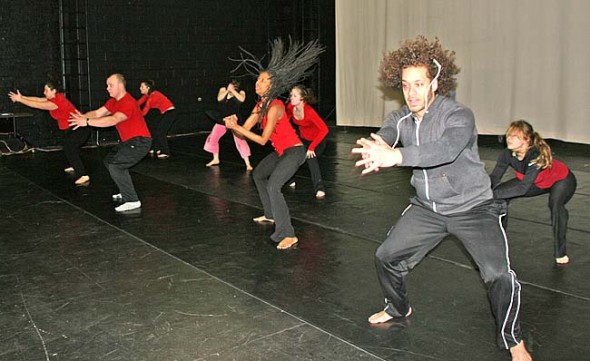 “Our American Skin,” an original dance by Valerie Blackwell-Truitt, center, will be one of the pieces by local choreographers performed at this weekend’s Yellow Springs Community Dance Concert, at 8 p.m., Friday and Saturday at the Antioch College Foundry Theater. Also performing above at right is Blackwell-Truitt’s son, Kyle, to whom the dance is dedicated. See article at bottom of page on the event. (photo by Suzanne Szempruch)

Human rights issues, original work from local choreographers and new things to do with chairs come together at this year’s annual Yellow Springs Community Dance Concert.

This year’s concert takes place at the newly refurbished Antioch College Foundry Theater this weekend, with performances at 8 p.m. Friday and Saturday, Feb. 13 and 14.

The annual dance event is, perhaps not surprisingly, unlike most dance recitals, according to co-producer Ali Thomas. The event features an eclectic range of dance styles — including street dance, belly dance, modern dance, folk and jazz, among others — performed by local dancers with various levels of expertise and experience.

“The dancers have all ranges of abilities,” said Thomas in a recent interview. “We tend to all learn from each other.”

Yellow Springs choreographers tend to create dances that are more accessible than typical modern dances, Thomas said, with the creators unafraid of sparking emotions in audience members, or of using dance to make a statement about social issues.

For instance, “Our American Skin” by Valerie Blackwell-Truitt, is an attempt to speak out against racism, and specifically racism perpetuated by white men, and sometimes police officers, against young black men. Created and originally performed in 2006 following an incident involving Blackwell-Truitt’s son, the dance has only become more timely following last year’s shootings by police of unarmed black men, organizers believe. So Blackwell-Truitt decided to bring the dance forward again.

“It seems a perfect fit to express the anger and sadness at being a mom and not being able to protect our child,” Blackwell-Truitt said last week.

The dance features 10 performers, including Blackwell-Truitt, who is especially pleased that her son, Kyle, in whose honor the dance was created, will be performing with her. The movements are set to the Bruce Springsteen song “American Skin (41 Shots).”

Blackwell-Truitt hopes the performance promotes dialogue around issues of race and police violence.

“We need to continue this conversation,” she said.

Another choreographer who uses dance to cast light on a human rights issue is Marybeth Wolf, whose original dance, “Roses Have Thorns” is a six-women piece created out of “collective and personal experiences of navigating the expression of radiance and aliveness in a world that perpetuates violence against women,” according to a press release. Dancers will sing a Croatian song about incest and rape as they move.

And audience members will have a chance as well to dance for an important human rights issue. After Saturday’s performance, the dancers will invite audience members to join them onstage to perform the “Break the Chain” dance in solidarity with the One Billion Rising, international movement protesting violence against women and girls. The dance will be taught in the theater lobby at 7:30 p.m. Saturday before that night’s performance, or can be viewed on YouTube.

Some of the dances strike a lighter note, including “Chair Dancin,’” an original piece by Jill Becker featuring Becker, Katie Gaines and Angie Bogner. Set to the 1933 classic song, “Let’s Fall in Love,” the piece looks at “what you can do with a chair,” according to Gaines, and that turns out to be quite a lot. The dancers each created pieces of the dance, and during the performance they improvise and play off each other.

Chairs also figure into “Rosas Danst Roses” (“We Dance Ourselves”), a dance choreographed by co-producer Melissa Heston as part of the “Fabuleus Rosas Remix Project,” an international re-staging of the famous modern dance first presented in Belgium in 1983, described by a New York Times critic then as “ a mesmerizing, exploration in synchronicity, patterning and rhythm.”

Heston chose to re-stage the dance to “play with the form, mix things up,” she said, and also to be a part of the annual worldwide event.

Another light-hearted original dance will be performed by Ali Thomas, Vickie Walters and Thomas’ daughters, Chloe Ramsey and Charlotte Walkey. Choreographed by Thomas, the piece is performed to a style of Korean pop music that’s similar to hip-hop.

Other choreographers and groups represented in the concert will be Greta Hill, Leslie Dworkin, Victoria Walters, Tricia Gelmini, Savanna Amos and the Egyptian Breeze belly dance troupe. Co-producers of the event are Thomas, Wolf and Heston, with help from Becker and Laryssa Ingebo.

For the first time, the dance concert is taking place within the recently renovated Foundry Theater on the Antioch College campus. The new location launches a partnership between the dancers and the college that the dancers have been anxiously awaiting, according to a press release.

However, there are challenges ahead for that partnership due to issues of affordability.

In an email, dance concert co-producer Heston wrote: “The space needs of the many many dancers, choreographers and performing artists in this village is vast. It’s unfortunate that the cost to rent most of the spaces made specifically for dance or performance for rehearsals are not affordable for our particular artist community. We will continue to try and negotiate affordable space rental fees with the entities. We have hope that negotiation and support and funding will help this effort. We are grateful to Amanda Egloff, part-time technical director at the Foundry Theatre, for negotiating with YS Dance on this particular concert.”

Tickets for the weekend performances are $10 for adults and $5 for children and seniors, with Antioch College students admitted free. For more information, contact Melissa Heston at 937-901-0344 or email her at melheston@gmail.com. 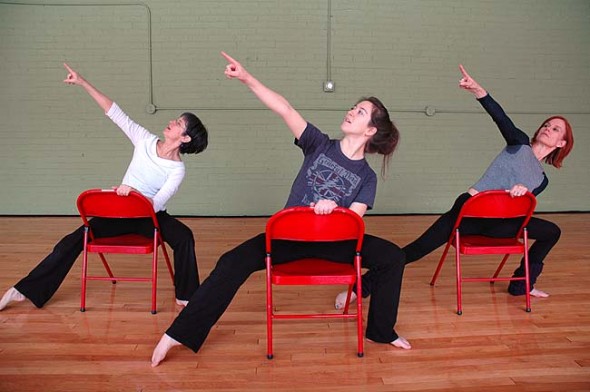