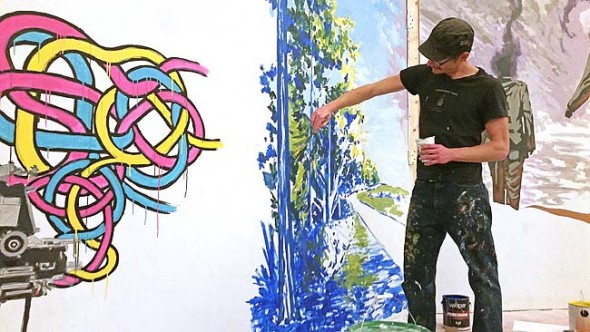 Local artist Travis Tarbox Hotaling is shown working on a mural for the TAG!: Territorial Negotiations exhibit at the Herndon Gallery on the Antioch College campus. The exhibit, which looks at local street art, continues through Feb. 13. (Submitted photo by Odette Chavez-Mayo)

Public art is the focus of TAG!

Spray painted on a wall somewhere is a quote about graffiti: Art in a frame is like an eagle in a birdcage.

Since local youth were permitted to paint on a single back wall of a downtown business more than 20 years ago, Kieth’s Alley has become a constantly changing brick canvas for “out of the frame” free expression. Elaborate painted murals, inspirational quotes written in simple marker and stylized “tags” of graffiti artists decorate the walls, giving artists a space to share their work while creating a visible community aesthetic.

But who has the right to paint on those walls, and what should they be allowed to paint? How long should street art be left untouched, and when can other street artists paint over their work? Should tags — letters spelling a graffiti artist’s handle — be considered art as much as image-based work?

Those were among the questions addressed at a recent panel discussion as part of an exhibit at Antioch College’s Herndon Gallery celebrating street art.

TAG! Territorial Negotiations, which features the street art of several local and national street artists, runs through Feb. 13 with open gallery hours from 1 to 4 p.m. Tuesday through Saturday.

Herndon Gallery coordinator Jennifer Wenker said she organized the panel after learning about a controversy in Kieth’s Alley, where street artists were painting over each other’s work.

“The public muralists that had been using Kieth’s alley for years are feeling threatened that their work they could spend weeks and weeks on could be tagged overnight,” Wenker said. “But who determines what art? If a person has a creative impulse to make ‘I am here’ [with a tag], isn’t that art?”

Panelists included local muralists Pierre Nagley, Travis Tarbox Hotaling and Zane Reichert along with the Jafa Girls — Nancy Mellon and Corrine Bayraktaroglu — who made national news in 2008 for their sweater-wrapped “knit-knot” trees.

In the fall, Reichert was at the center of the controversy when graffiti artist Zac Daniels, known as Rac, painted over his towering Godzilla mural on the so-called free wall in Kieth’s Alley with a tag of his name in stylized letters. Reichert painted a response to the graffiti that featured muscular figures smashing the tag with a sledgehammer, which Daniels considered “a huge insult” and immediately painted over.

Daniels, who did not attend the panel, said in a later interview that the Godzilla was untouched for months and that other graffiti that had recently been added to the mural made it look like a “mess of nonsense.” Reichert felt that Daniel’s piece wasn’t integrated into the existing work and was more like it was “copy and pasted,” he said.

A three-panel installation in the exhibit re-imagines the Kieth’s Alley conflict, with Reichert’s Godzilla figure confronting the stylized letters of a graffiti tag in an otherwise bland cityscape. The “diorama of street art,” as Reichert calls it, evolves from an artist tied to a machine with his manufactured images creating an idyllic landscape that is destroyed by “demonic forms” as men in gray suits who obliterate the creative images to erect a gray urban wasteland. The piece was produced by Hotaling, Nagley and Reichert.

Hotaling, who has painted murals outside of Ha Ha Pizza and in the Sunrise Cafe, said his take is that tags can seem “formulaic and forced” while other artists engage in a more responsive process that continues to evolve. But he added that criticizing graffiti is troublesome.

“It’s hard to generalize and say mural work is a higher end a form of art and graffiti is a degradation of a neighborhood and a symptom of things being disheveled,” Hotaling said.

But Daniels, who has also done private murals at the Highlander Laundromat and behind Mr. Fub’s Party, argues that street art includes tags and the use of non-sanctioned space. Daniels has been a part of graffiti culture for more than 20 years, learning the art from New York graffiti artists and subway painters who attended Antioch College or visited the college in the early 1990s. Having painted around town for two decades, Daniels said he believes there is room for both styles, even though he has been discouraged from using local walls again.

The “free wall” behind Kieth’s Alley is the rear of a downtown building owned by Bruce and Carol Cornett that hosts the stores Pangea, Dark Star Books and Current Cuisine. In 1988 the Cornetts gave local youth permission to paint the wall and it has been an open space since. Cornett said there have been no prior artist controversies and few neighbor complaints, with the artwork there typically changing several times per season. Cornett only has two rules for using the space — “Don’t put something up there that would offend my mother, and respect the other artists,” he said.

While Cornett doesn’t prefer the style of tagging, he believes in the right of anyone to express him or herself, even if the type of art doesn’t move him.

“It’s not necessarily my art but that doesn’t mean it’s bad,” Cornett said. “I also like listening to the radio just to hear what people are listening to — it’s how we understand our culture.”

After Cornett opened his free wall, other downtown businesses and private residences along Kieth’s Alley commissioned local artists to paint decorative murals for their rear walls, including the Emporium, the Little Art Theatre and The Winds Cafe, Cornett recounted.

At the panel and in a later interview, Mellon defended the value of public art and spontaneous street art in Yellow Springs, where “you never know what is going to show up,” even though she feels like much artistic energy has been squelched by recent efforts to regulate downtown busking and art shows in public spaces.

“When people put something up in the public area that is not expected and it gets a reaction, whether it’s your kind of art or not, it is good for everyone,” Mellon said. “It just makes their lives more interesting.” 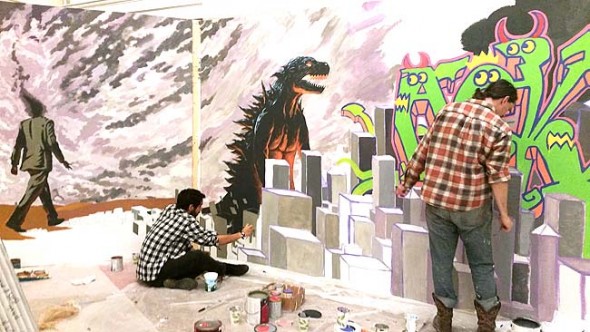 Drawing room
Local muralists Zane Reichert, left, and Pierre Nagley worked on an installation at a Herndon Gallery street art exhibit that depicts a recent confrontation over use of the “free wall” in Kieth’s Alley. (Submitted photo by Odette Chavez-Mayo)