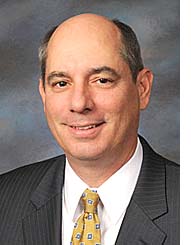 Conard has served as solicitor (attorney) for the Village since taking the place of John Chambers of the same firm after Chambers moved out of state. And while Council members stated they were very satisfied with Conard’s services, it seemed time to relook at the position because it had been 12 years since the Village signed on with Coolidge Wall, and costs had been rising, according to Council President Karen Wintrow at the meeting.

Eight firms applied for the position, and three finalists made presentations to Council in January: Coolidge Wall of Dayton, Bricker and Eckler of Cincinnati and Columbus, and the large midwest firm of FrostBrownTodd.

Following an executive session last Tuesday, Coolidge Wall won out. Conard will be assisted in the solicitor position by attorney Amy Blankenship.

“We’re glad we explored this and are satisfied with the Coolidge Wall proposal,” Wintrow said. “It’s quite a good contract.”

Coolidge Wall will charge a retainer fee of $4,750 a month, or about $57,000 a year for regular solicitor work, including attending all Council meetings and performing standard solicitor duties, which includes offering legal advice on a range of issues. There would be extra fees for out of ordinary services, such as representing the Village in court.

The retainer fee proposed by Coolidge Wall is considerably less than the amount the Village has paid to the solicitor in recent years. While the cost was about $43,000 in 2010, it jumped to $124,000 the next year, then about $114,000 for two years, with the higher fees coinciding with a lawsuit against the Village. Last year the Village spent $77,605 for the solicitor position.

In his January presentation, Conard emphasized his personal connection to the village, the home of his sister and her family, and his respect for Yellow Springs values. He also recommended that the solicitor attend all Council meetings, which has not been the past practice, to keep abreast of local issues.

However, former Council President Judith Hempfling, while supportive of Conard as the solicitor choice, encouraged Council to reconsider having the solicitor attend all Council meetings. Doing so could undermine the authority of Council, Hempfling said, as people tend to look to experts for solutions.

“Often the experts are wrong,” she said, citing the example of experts who encouraged the Village several years ago to sign on to several coal plant projects, which would have ended up not only environmentally unsustainable but very expensive.

And relying on experts can dampen public debate, Hempfling said.

“I think it could interfere with the democratic process,” she said.

While Council member Lori Askeland said she understands Hempfling’s concern, she believes the burden is on Council to use the solicitor appropriately. Council agreed to try having the solicitor at meetings for a year and then evaluate the practice.