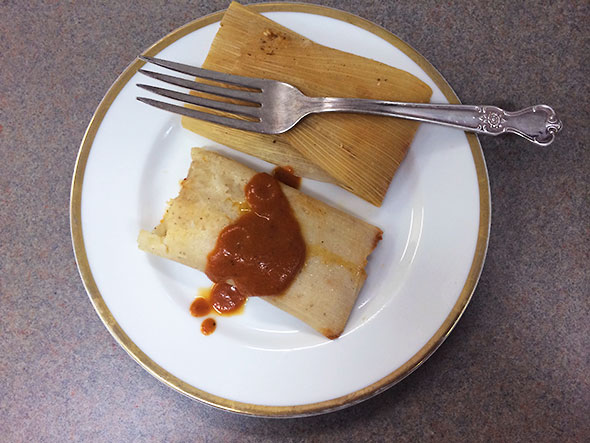 On Friday, I returned to the Yellow Springs Senior Center for a cooking lesson with Chef Corey Elbin and, again, I did not come empty handed. I carried a 3 pound vat of pork fat, namely lard, for show and tell. As I joined the class, I lined the vat next to a row of ingredients— cumin, chili peppers, and a special corn flour blend called —and found a seat for the class.

Chef Corey was making tamales, a traditional Mesoamerican dish made of a corn-based dough. Tamales are cooked by steaming the corn-husk-wrapped meal in a steamer, or tamalera. Corey had rolled up a dozen tamales the night before and set that batch to steam for an hour in the center’s galley kitchen. We would sample them soon enough, after we had learned to assemble them for ourselves. 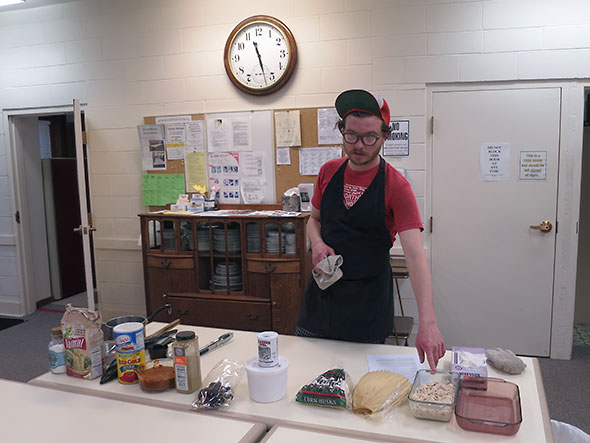 Chef Corey holds a special admiration for Mexican foods especially those lovingly made by the family. Tamales are a versatile dish and the preparation depends on traditions passed down through generations and shared among neighbors. The foundation of a tamale is the masa, a gluten-free dough made from hominy and vegetable shortening and chicken stock or, alternately, the lard that I had brought. For the masa, Corey was going with a pre made hominy by Maseca. It can also be made at home using dried corn kernels that are boiled and then soaked in limewater. Because we were making chicken tamales, Corey selected the vegetable shortening and chicken stock for our demonstration The pork fat—which I had acquired from Dale Filburn of Morning Sun Farm—would be the better choice for tamale stuffed with pulled pork. He let me work the dough. I kneaded for about ten minutes while he slowly added chicken stock until the dough reached the creamy, moist consistency of hummus. 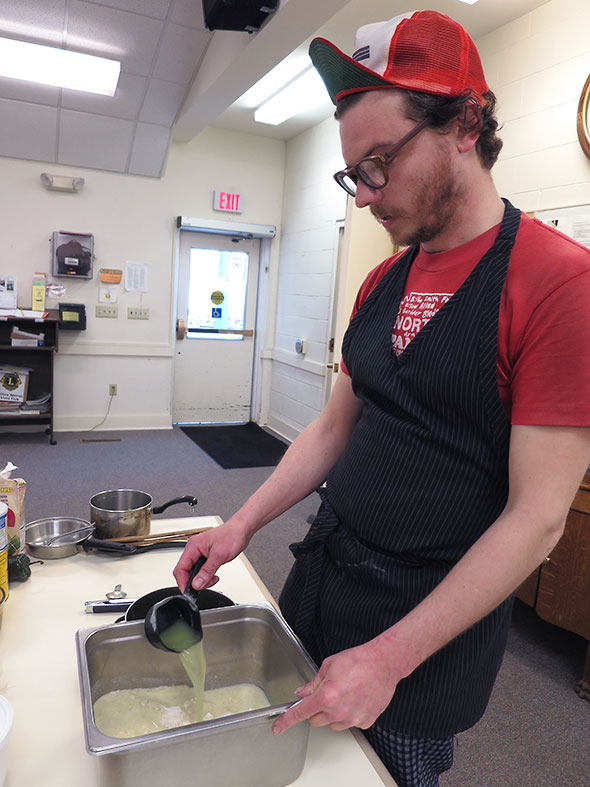 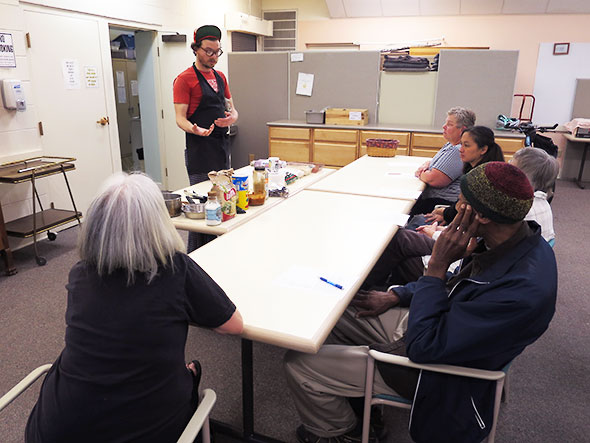 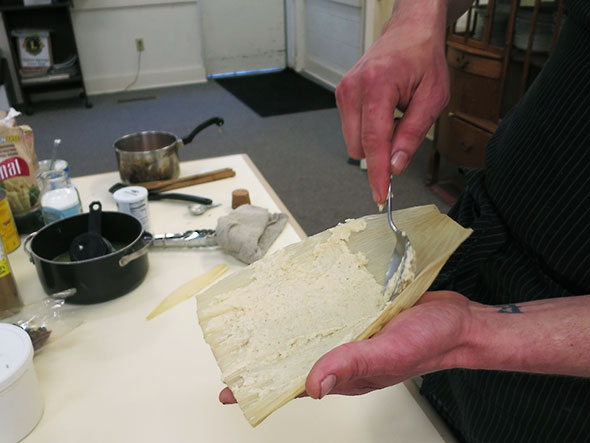 Next, Corey dried off a corn husk which had soaked in water for two hours and spread a heaping tablespoon of masa on half of the husk. The husks are shaped like a V and he pointed the tip of the V away from him spreading the masa across its wider top. Then, on top of the layer of masa, he added a dollop of red sauce explaining the different kinds of tomato-based hot-pepper-kicked red and green sauces that different families prepare for their own tamales. On top of the sauce he added a spoonful of chicken pulled from its bone and added a touch more sauce. Then he rolled the tamale together folding the empty tip over and leaving the masa filled top open. When ready to steam, the tamales will sit folded tip down to cook. 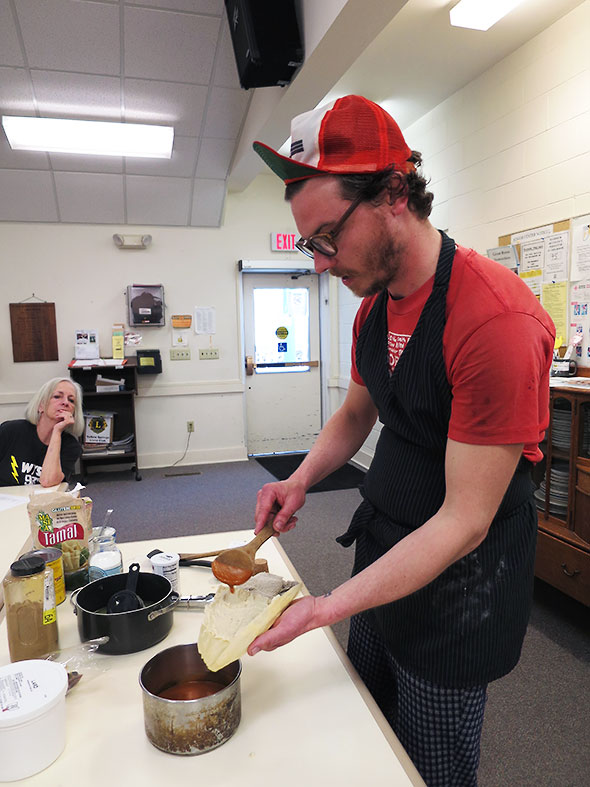 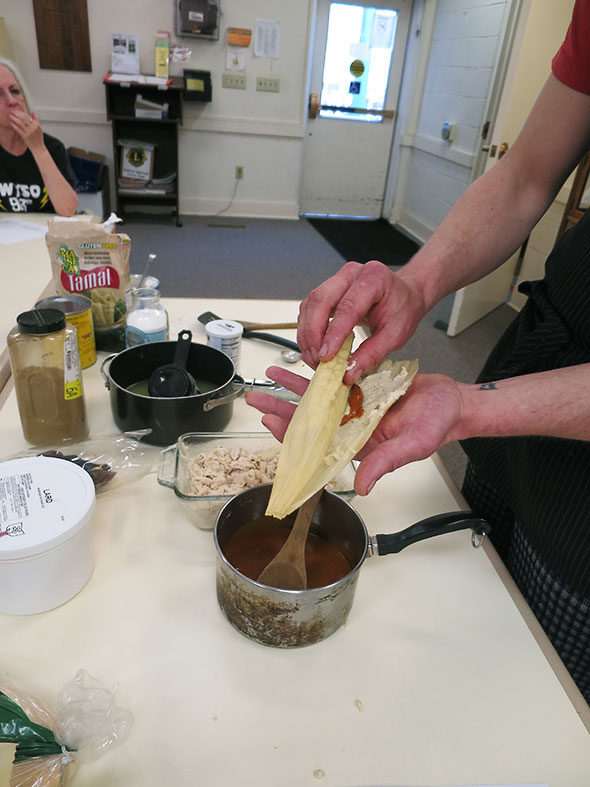 My classmates and I took our turn rolling the tamales. I had a hard time keeping the tamale ingredients from spilling out the seams of the tamale but, after a couple wayward attempts, soon found an adjustment to how I spread the masa that kept the mash contained in its wrapper. 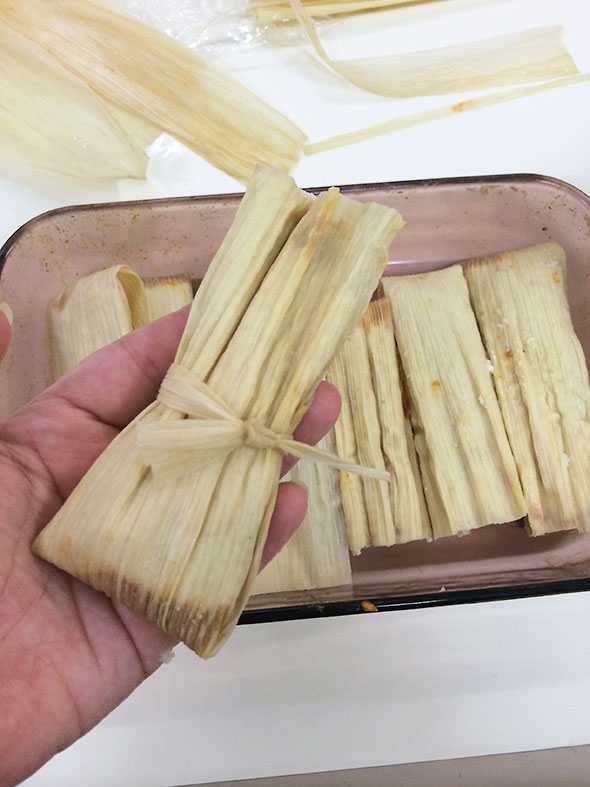 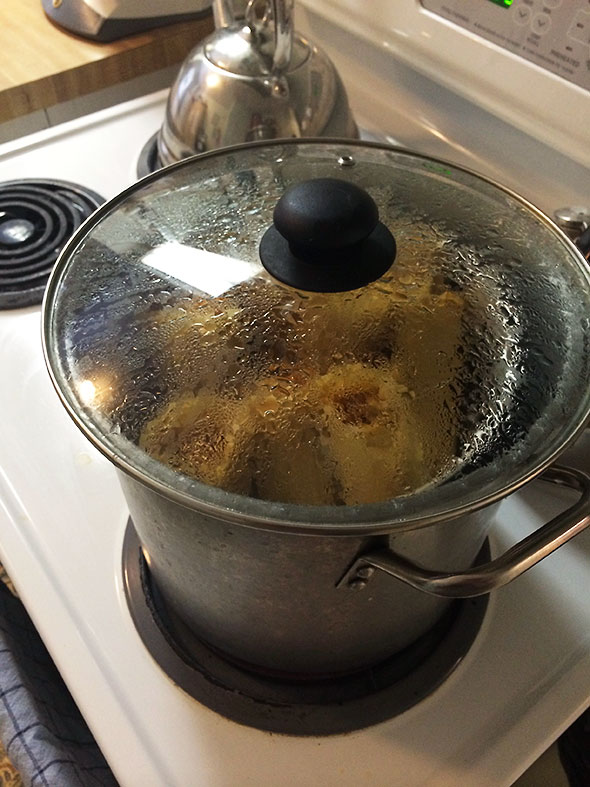 Families often gather to prepare tamales: the children would dry the corn husk, someone would spread the masa, others would add the stuffing…sauce, pulled meat, egg, raisins, and/or olives…, and someone else would fold. I decided I would gravitate to folding the tamales enjoying putting the final bow around the tasty package. 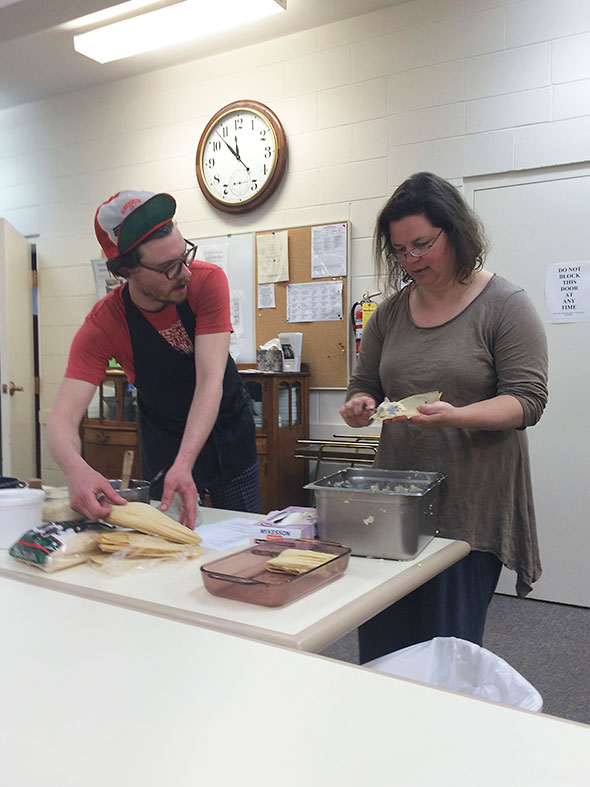 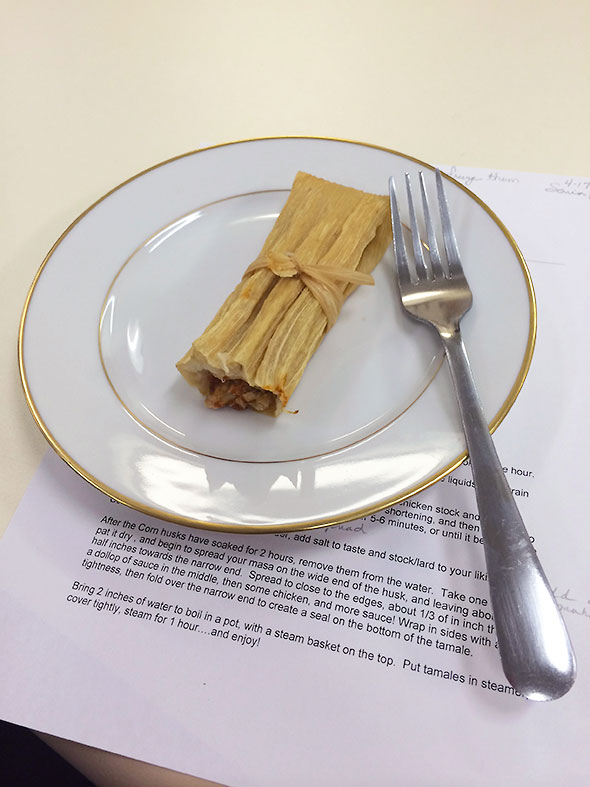 We made a full dozen tamales and discussed alternate sauces, spices, and fillings until the pre made batch of tamales was done. Chef Corey recommended a pork shoulder for the tamales that I will make from that pork fat that I brought and I can imaging the children enjoying the process of kneading the dough and stuffing the husks. I imagine a new family tradition forming around this wonderful gluten free treat and its many intriguing adaptations. Ours will involve olives.