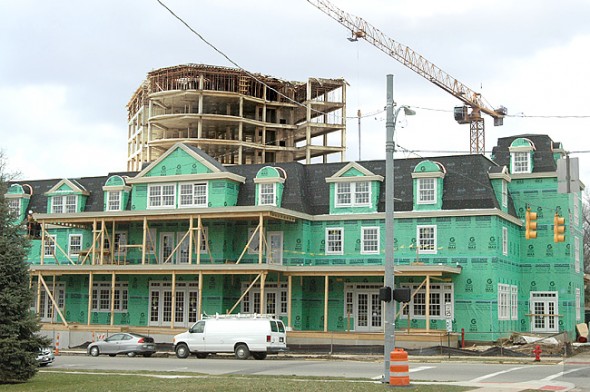 The new Mills Park Hotel addition, the Mills Park Parking, has begun to take shape. The 6-story tower can accommodate up to 80 cars and will host a rotating roof-top restaurant. (Photo by F. Stop Fitzgerald)

“What is that?” asked villager Les Isthmore.

He was referring to the towering addition rising behind the emerging Mills Park Hotel, in the “empty” part of the lot.

That has been the question on the lips of many Villagers and passersby this last week, who have often wondered why the hotel was being built so close to Xenia Avenue, as there seemed to be plenty of space toward the back.

“We saw it go up, and I was kind of surprised,” mused Isthmore. “We saw the drawings and such, but figured it would be set back more, sort of like the old Barr place. But now this tower thing? What’s with that?”

The answer to the mystery is pretty pragmatic, says builder and owner Join Hammer. “It’s a parking structure with a restaurant on top,” he explains. “A rotating one.”

Hammer points out that because the decision on whether or not to levy a 3 percent excise tax on prospective hotel customers was left hanging in limbo, he decided to hedge his bets on his investment and create another revenue stream.

“A parking structure is the ideal solution. Mills Park Parking. Cars won’t clog up the surrounding neighborhoods, which would happen even with a decent-sized parking lot in back.” He says the restaurant was his wife’s idea. “She said, as long as you’ve got the highest building in town, why not make something where people can sit and enjoy the view?”

The revolving part was a friend’s addition. “Naturally, [he] would complicate it. But I love it! I love a challenge.”

Neighbors are not so pleased. “Apparently, you’ll be able to hear the grinding of the restaurant motor all night,” said Will Viewstone. “It’s like a mill wheel, going round and round all the time, and every few minutes, there’s the same people at a table, eating, looking into my bedroom window.”

But Hammer reassures, saying that he has experience with mill wheels. “I am convinced that, because of its height, the motor assembly will be close to inaudible. As for the rotating diners, I think they’ll be far more interested in looking out over our quaint village.” And, he adds, in twenty years, there’ll be a new canopy of trees to thwart prying eyes.