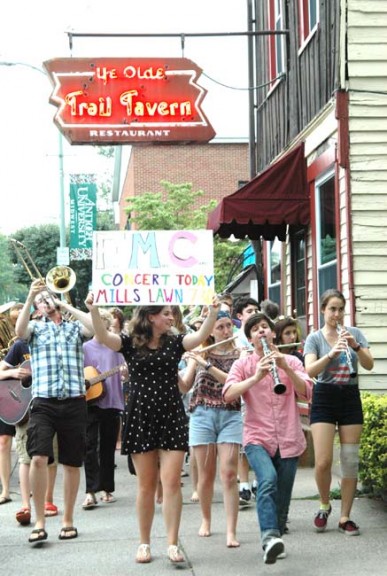 As a senior project, YSHS senior Josh Seitz, shown above tooting his clarinet, will host a recital featuring a handful of accomplished high school musicians performing Bach, Fuchs and Schubert on winds, strings and voice on Thursday, April 30, at 7 p.m. at the Yellow Springs Senior Center. (archive news photo by Matt Minde)

Yellow Springs High School senior Joshua Seitz didn’t adore playing music when in fourth grade he started taking piano lessons, along with his father and older brother. But in fifth grade, Mills Lawn gave him his choice of instruments, and he found he really liked the sound of the clarinet. So he practiced. He practiced seriously and often. Now he is considering claiming his acceptance to Lawrence Conservatory of Music in Wisconsin.

Seitz isn’t the only musician who mastered an instrument through love of sound. Several of his peers, juniors Gabriel Day and Meredith Rowe, and seniors Alex Kellogg and Anna Knippling have also worked hard to achieve music on their wind, string and vocal instruments worthy of public presentation. So, as his senior project, Seitz organized a classical music concert to expose their talents.

“Music is one of my passions, and I wanted to use that to give back to the organizations that have helped us,” he said.

The event takes place on Thursday, April 30, at 7 p.m. in the Senior Center Great Room. There is a suggested donation of $10, and the proceeds will benefit the music program at Yellow Springs Schools.

The program includes Emile Péssard’s Andalouse for flute and piano, with Rowe and professional accompanist Mary Fahrenbruck; Kellogg playing Sonata No. 1 in G minor for Violin Solo by J.S. Bach; Concertino for clarinet and piano by Weber; Paul Creston’s Sonata in Eb for saxophone and piano with Day and Fahrenbruck; and a clarinet and flute duet Op. 19, No. 2 by Georg Fuchs with Seitz and Rowe. Knippling will also sing Der Hirt auf dem Felsen (Shepard on the rock) by Franz Schubert with clarinet and piano accompaniment.

Several of the musicians have been performing together for years in the high school band Sassabrass, and at Friends Music Camp in Barnesville, Ohio. Seitz has also played in District Honors Bands and in pit orchestras for shows such as Muse Machine’s “Oliver.” This fundraiser concert is a way to share with the Yellow Springs community the sounds that are kindled from support for the local music programs.

“There aren’t that many performance opportunities for such a dedicated group of musicians who have spent countless hours in our houses practicing,” Seitz said. “I wanted the community to hear what we’ve been playing together, especially as we’re saying our goodbyes.”