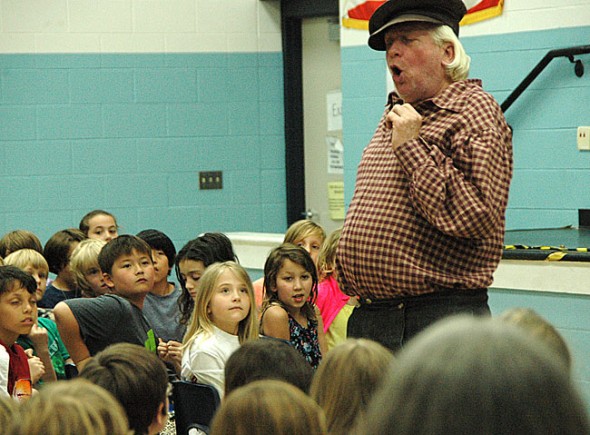 California ’49er stops at Mills Lawn along his journey

Cartographer J. Goldsborough Bruff braved a westward trail from the East Coast to California in the 1850s to find the gold that would make him rich. In a living history actor Hank Fincken told the students at Mills Lawn School this week, he encountered many dangerous obstacles along the way and almost didn’t make it back.

Fincken’s version of Bruff’s story was a preview of the full performance he will give during this summer Ohio Chautauqua stop in Clifton from June 30 to July 4. This year’s tour theme “Journey Stories” will also include living history portraits of Olive Ann Oatman, a 14-year-old girl who was captured by Native Americans in Arizona in 1851, played by Dianne Moran; Titanic survivor Edith Russell, played by Debra Conner; Martin Luther King Jr., played by Marvin Jefferson; American writer and poet Henry David Thoreau, played by Kevin Radaker.

During the week the Chautauqua is in Clifton, evening performances will take place under a tent to be erected on the school house lawn, adjacent to the Opera House. Daytime events also include student-oriented presentations at the Yellow Springs, Xenia and Cedarville libraries, the Afro-American Museum in Wilberforce, and other sites.

Ohio Chautauqua Tours are organized by the Ohio Humanities Council (funded by the National Endowment for the Humanities) and include stops in four communities around the state each summer. Clifton was chosen for the first time as one of the 2015 sites.