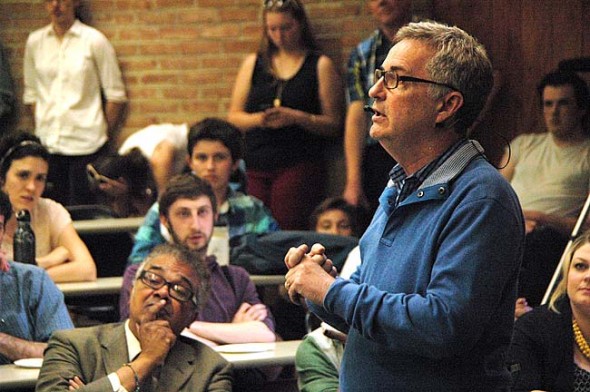 Antioch College President announced on Tuesday that he'll leave his job at the end of the year.

At an Antioch College community meeting on Tuesday, May 5, President Mark Roosevelt announced that he will leave his job in December, at the end of his five-year contract.

“We’ve taken a dream and made it a reality,” he said to college faculty, staff and students, noting that he’ll leave his position “with enormous regret and mixed feelings.”

Roosevelt said he will stay on through the end of the year, including the November site visit of the accrediting agency North Central Association, which takes place in November. Roosevelt said he is hopeful that Antioch will gain accreditation next year, possibly by June 2016. He’s announcing his decision now so that a search committee can be put into place and a new president hired before he leaves.

Roosevelt said he does not know yet what he’ll do next, but that he and his wife, Dorothy, feel “it’s the right time” to make a change.

For an extended story on Roosevelt’s announcement, see the May 7 Yellow Springs News.