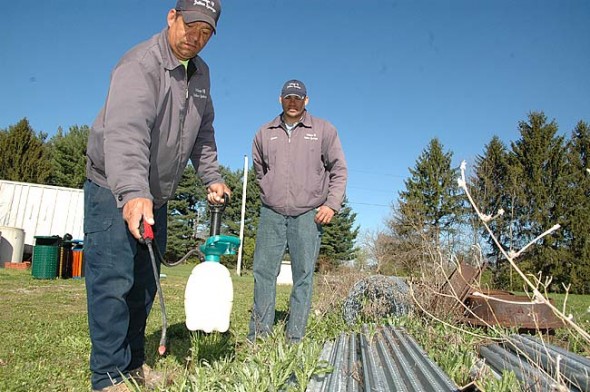 Jason Hamby, right, superintendent of streets, sewers and parks, looked on as his crew member Kent Harding recently tested a new, all-natural, vinegar-based spray to kill weeds without the use of synthetic chemicals at the public works headquarters at Sutton Farm. The Village is exploring alternative methods and products to conventional herbicides on public property this summer while a new pesticide policy is developed. (Photo by Megan Bachman)

“Warning: This area chemical treated. Keep children and pets off.”

Signs like these pop up on local lawns each spring as local residents contract with companies to treat their lawns with chemical pesticides and fertilizers for the season.

But could these chemicals be harming the health of humans and other species in the local ecosystem long after the signs come down? And if so, what can be done to limit the exposure of villagers to these potential toxins?

Local garden and landscape designer Nadia Malarkey, for one, is convinced that commonly-used pesticides like 2,4-D, dicamba, glyphosate and others are essentially poisons that harm human health while they kill off species vital for a healthy ecosystem such as soil microbes and pollinators.

Last week, Malarkey gave a presentation to the maintenance crew of the Village of Yellow Springs on alternatives to chemical pesticides for weed control. In her role as a member of the Environmental Commission, Malarkey is also working with Village Manager Patti Bates to craft a policy on public land maintenance for Council to consider. Ultimately, Malarkey would like all local homeowners to know about environmentally friendly alternatives to chemical yard care, and for many to voluntarily pledge to not use chemicals on their property.

“We are surrounded with toxins in our everyday lives and we can never be free of them,” Malarkey said this week. “However, we can limit our exposure to these pesticides, herbicides and fungicides by how we choose to manage our lawns and landscapes.”

As the Village maintenance crew members experiment with using natural sprays like industrial-strength vinegar and clove oil and alternate methods such as laying down thick plastic to kill weeds, Malarkey would like villagers to be aware of their efforts to go green. A new Village policy-in-the-making could further cut down on pesticides being used on public lands.

“The crew has been taking the time to address this issue and our amazing Village manager has been willing to learn — they should be commended,” Malarkey said.

While lawn company safety signs indicate that lawns are safe after 72 hours, pesticide residue can drift on the wind to other areas, infiltrate the groundwater and be tracked into homes by people and pets where they are inhaled in dust and can remain in carpets for up to a year, according to Drew Toher of the national nonprofit Beyond Pesticides in a telephone interview this week.

“One of the biggest concerns is pesticide drift,” Toher said. “There is no guarantee that the pesticide will stay on the lawn. You don’t want to take that risk,” Toher added, “especially when there are alternatives out there.”

According to the National Pesticide Information Center, a collaboration between the U.S. Environmental Protection Agency and Oregon State University, pesticides have a specific purpose in society, “to kill organisms that cause disease and threaten public health, control insects, fungus, and weeds that damage crops, control pests that damage homes and structures vital to public safety,” according to its website. The site adds that all pesticides are, by their nature, toxic to some degree, as they are intended to kill, prevent or repel a living organism. But risks can be reduced based on how toxic the ingredients are, and the amount humans and other organisms are exposed to.

But according to Toher at Beyond Pesticides, the U.S. EPA doesn’t highlight that studies have shown some lawn-care chemicals can cause a variety of health problems from as mild as skin irritation to as life-threatening as cancer, reproductive problems, endocrine disruption, liver and kidney damage, developmental delays and more. Meanwhile, the U.S. EPA does not test for safety the product’s inert ingredients, the combination of chemicals used or exposure to long-term low doses, leading many people to believe they are safe, he said. Malarkey added that often the EPA does not complete independent testing and does not have to review peer-reviewed scientific literature, instead relying on health data from the manufacturer to assess safety and set exposure parameters.

Above all, Toher and Malarkey encourage villagers to do their own research and not trust either lawn-care companies or government agencies.

“People trust organizations like the EPA to keep them safe, but they don’t realize the chemical companies are setting the standards,” Malarkey said. “People should do their own research and look up the ingredients on the labels they are using.”

In the summer of 2013, Village crew members applied an undiluted herbicide to the grassy area surrounding the Gaunt Park pool, causing the Village to shut down the pool to study the potential contamination of the area. A later investigation found that the Village crew members did not have the necessary license to apply pesticides to public property and did not read the instructions advising them to heavily dilute the herbicide with water before spraying. The substance, which contains both 2,4-D and dicamba, was applied at full strength, while instructions advised diluting the product by at least 50:1.

At the time, some residents voiced concerns over the potential health impacts of being exposed to the undiluted herbicide, with many reporting a chemical smell in the air and taste in the water for two days following the application and before the pool was voluntarily shut down by the Village. Others were alarmed at what is a common practice of using chemical herbicides to fight weeds in town. Village Council responded by instituting a temporary moratorium on the use of herbicides on public property, which was later lifted when Council authorized the Village crew to use specific environmentally-friendly products in certain instances, such as around the electrical substation on Fairfield Road, where power tools cannot be used for safety reasons.

Jason Hamby, the superintendent of the streets, wastewater and parks and recreation areas, said this week the crew is learning about alternatives to chemical herbicides to manage weeds around the village, including those springing from sidewalk cracks, those around equipment at the Sutton Farm and along fence rows at Gaunt Park. Currently, only vinegar- and essential-oil-based sprays are being used, while other non-chemical techniques are being investigated. The crew doesn’t currently use gyphosate, 2,4-D or other chemicals typically used in other municipalities, although Hamby did receive his pesticide applicator licenses for industrial and turf pesticide, training that will help him protect his workers, he said.

Hamby said it is important for the community to know that the crew clears weeds to reduce trip hazards and maintain critical infrastructure. The undiluted herbicide was initially applied at the pool in 2013 after a complaint about clover attracting bees to the area, which could have potentially led to a bee sting.

“The reason why we spray is for public safety,” Hamby said. “We’re not out there spraying willy-nilly.”

Later this year, Council could consider an ordinance that prohibits the use of chemical pesticides on publicly owned land, following the lead of other jurisdictions such as Cuyahoga County in Northeast Ohio. A more detailed policy recommendation is currently being developed by Bates with the assistance of Malarkey and the Environmental Commission. But the Village could not ban the use of chemical pesticides on private property. That’s because, along with 42 other states, Ohio passed a pre-emptive state law that disallows municipalities enacting pesticide restrictions stricter than those allowed by the state.

In the absence of a possible community-wide ban, Malarkey and others are relying on education campaigns and voluntary pledges from residents to eschew lawn chemicals. Through her local Pollinator Regeneration Project, to be launched in June, Malarkey is hoping to teach people about environmentally-friendly products and approaches to lawn care, while garnering volunteers to agree to plant native species that will attract bees and other important pollinators and take the “pollinator pledge” to avoid any chemical pesticides.

“The goal is the regeneration of Yellow Springs one property at a time,” Malarkey said of turning some chemically-treated lawns into more healthy, diverse local ecosystems.

But the first step is educating people about the dangers of chemical pesticides and fertilizers, Malarkey said. In the case of pesticides, the precautionary principle should be applied, she said. Scientifically, some of the cause and effect relationships between human health and pesticide application have not been fully established, but when human health or the health of the environment is at stake, precautions should be taken, the principle states. In addition, the burden of proof that a product is safe should be on the manufacturer, not the government or the public, according to the Science and Environmental Health Network.

“When faced with a problem, look at the other options before grabbing a chemical,” Malarkey said of the precautionary principle.

As a landscape designer, Malarkey sees how chemical pesticides and fertilizers don’t just affect the target species, they can devastate microbial soil life, kill off important insects and actually weaken plant life. Above all, people need to be aware of the “interconnectedness of all life” and how human activities impact the ecosystem, she said.

According to a fact sheet from Beyond Pesticides, in the U.S. lawns are the most commonly irrigated crop in the country, and more than 78 million households use home and garden pesticides, dumping more pesticides per acres than agriculture. Of the 30 commonly used lawn pesticides, 13 are probable or possible carcinogens, 13 are linked to birth defects, 21 to reproductive effects, 15 to neurotoxicity, 26 to liver or kidney damage, and 11 have the potential to disrupt the endocrine, or hormonal, system, according to the national nonprofit group.

Especially concerning is the exposure of children to pesticides, the Beyond Pesticides report notes. The National Academy of Sciences estimates that 50 percent of lifetime pesticide exposure takes place in the first five years of life. Exposure to home and garden pesticides can increase a child’s likelihood of developing leukemia by almost seven times. The chemicals are also linked to increased rates of miscarriage, suppression of the nervous, endocrine and immune systems, hyperactivity, developmental delays, behavioral disorders and motor dysfunction. Pets are also susceptible to cancers and other diseases from pesticides.

The EPA also admits that no pesticide is 100 percent safe, stating on public materials that all pesticides are toxic to some degree and that they pose some risk to children, pets, adults and wildlife, especially when chemicals are overused or carelessly applied. Local residents interested in natural lawn care approaches should first ask themselves how much lawn they need, Malarkey said. Lawns could benefit from compost tea and aerating, while synthetic fertilizers should be avoided because of their negative impact on the microbial life of the soil, she said. There are now products available at garden centers that are all natural, but she suggested villagers research brands and not be duped by the use of words such as “organic” and “natural” on product labels, since they are not subject to USDA organic standards. Talking with neighbors is also critical, to reduce one’s exposure to pesticide drift and to enhance the local ecosystem, she said.

“The best way to treat your lawn is to understand that the soil is a foundation of a healthy lawn and there is an intricate balance between the microorganisms in the soil and the plant,” Malarkey said. “There’s nothing wrong with having a lawn — it’s just how you manage it.”