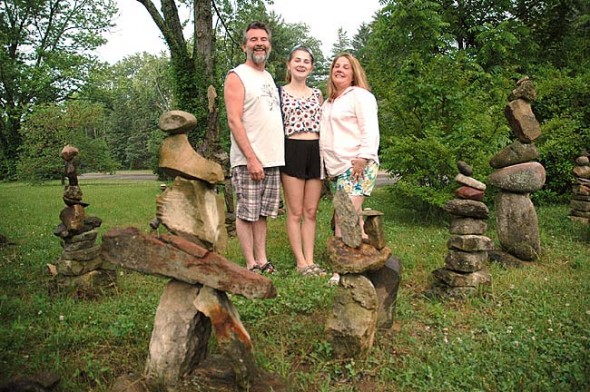 The Village of Yellow Springs Public Art Commission will award Tim and Kelley Callahan, here with their daughter Lucy, the first Village Inspiration and Design Award, or VIDA, on Friday, June 19, 8 p.m. at the YSAC Gallery. At their home on the corner of Corry Street and Glen View Road, the Callahans have built ever-changing stone piles, or cairns, for the last 20 years. (photo by Lauren Heaton)

Spires of art and whimsy

The mystical garden of rock forms balanced precariously in the yard of Tim and Kelley Callahan has a life of its own. For the past 20 years the stones at the corner of Corry Street and Glen View Road have been changing shape and combination, according to the mood of Tim Callahan, as well as the wind, rain, ice and birds that precipitate their undoing. Callahan respects the change and the constant call to tend an art and a kind of meditation practice that the cairns he built there have created.

Recently, the Village of Yellow Springs Public Art Commission noticed the long-term project as well and will present the first Village Inspiration and Design Award, or VIDA, to the Callahans during Art Stroll on Friday, June 19, 8 p.m., at the YSAC Community Gallery.
The VIDA award is for those who creatively enhance the overall appearance of the village through inspirational art, architecture, landscaping and design. The Callahans’ rock/monument garden has been a sustained project coincidentally located at a Yellow Springs school bus stop, where it has the potential to create dialogue among local youth.

The Callahans’ project began accidentally when Tim underestimated the volume of rocks he would need to haul from a Riding Centre horse field to build a low wall around his yard. Finding himself with a bunch of granite, sandstone, fossil and limestone rocks, he decided to start stacking instead. He found the process engrossing and meditative, and has learned both patience and humility from the rocks, he said. And though they tumble just about every season, he keeps coming back for the “strange impossibilities” that gravity works on dense, oddly shaped masses, allowing them to balance on top of one another.

“I tend to get in the way of what I do — in life — so this helps keep me honest and keep me from owning what’s not mine anyway,” he said.

According to Tim’s daughter Lucy Callahan, who is the same age as the cairns, the rocks also teach acceptance and letting go.

“It never works when you get mad at it,” she said.

The Public Art Commission accepts nominations for the VIDA at pac@vil.yellowsprings.oh.us.