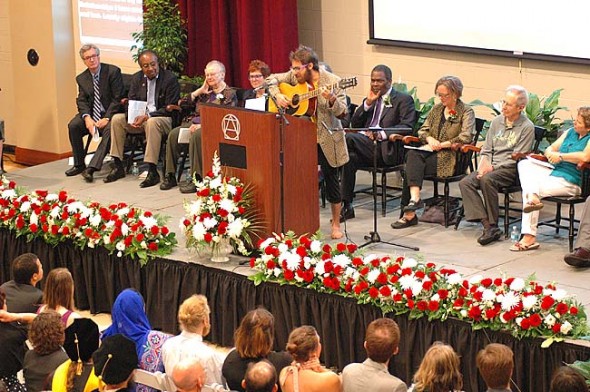 On Saturday morning hundreds of enthusiastic Antioch College students, parents, leaders, staff, and Yellow Springs community members attended the college’s first commencement ceremony since its revival, held at the Wellness Center with the overflow crowd at McGregor 113. Twenty-one students graduated. Shown above are, at top, Seth Kaplan-Bomberg, one of six graduates chosen to speak, delighted the crowd with his original song about his college experience. (photo by Matt Minde)

Inspiring, rousing, uplifting — each component of the Antioch College commencement fit these descriptions on Saturday, as the college celebrated its first post-revival graduating class while reaffirming its social justice legacy in the light of the recent massacre of nine African Americans.

“We will not abide people coming into a sanctuary and killing us,” shouted Dr. Clarence B. Jones, the commencement speaker, to spirited applause from the packed house at the college’s South Gym. Jones, an attorney and speechwriter for Dr. Martin Luther King Jr. and the last-minute replacement for civil rights icon Congressman John Lewis, brought to the event both civil rights bona fides and a passionate plea for a response to last week’s tragic event that’s “commensurate with the magnitude of the injury.”

While Jones made clear that he was not calling for violence, he emphasized that this country’s current level of racism and violence demands far more massive and effective protest than has been recently seen.

“We have to creatively think of different forms of protest. We’re not going to stand by idly and carry signs. We have to end this mess,” he said, adding that “I’m mad as hell and not going to take it anymore.”

The audience of students, parents, college leaders and staff  and Yellow Springs community members responded in kind to Dr. Jones, having been invigorated by the World House Choir both before and during the event. The local choir warmed up the audience with powerful renditions of “Glory,” with local rapper Issa Walker, “We Are Here,” “Tshotsholoza,” a South African freedom song,” and “We Are the Ones We’ve Been Waiting For,” by Bernice Johnson Reagon.

Though audience members responded enthusiastically to Jones and the choir, the 21 Antioch College graduates, who received thunderous applause and a standing ovation as they entered the gym, were clearly the stars of the show.

“Very few will know what this class did for this college,” President Mark Roosevelt stated in his welcome. Even more important than creating new college practices and traditions and recreating old ones, the young people “allowed this college a chance. By being here, they showed this can be done …”

In his invocation, Professor Emeritus Al Denman called on the graduates to heal the ailing environment, and also to “Listen to each others’ songs, devise your own songs and sing, sing, sing!”

In their talks, the six graduates selected to speak were, in very different ways, articulate, passionate, creative and occasionally pointedly critical of their alma mater — just what you’d expect from graduates of Antioch College.

In his remarks, Guy Jack Mathews lauded his peers for their desire to do good but especially for their perseverence.

“We have proven time and time again that we can be devastatingly effective,” Mathews said, concluding that, “Together, we can change the world.”

While the official education Elijah Blanton received focused on political economy and the Spanish language, his most significant learning at Antioch involved “how to be here with each other and make things work,” he said in his speech.

And though Blanton acknowledged failures in the college community that led to the loss of a significant number of the original entering class, he also said, “I’m convinced I received the best education anyone has ever gotten.”

Speaker Nargees Jumahan, a graduate who was raised in Afghanistan, spoke of her high hopes coming to a college reputed to be a beacon of social justice. However, she said, “I’ve still been subjected to racism and classism in this institution.”

Jumahan said she felt “ostracized” for her religious practices when she took a month off to honor the Muslim holy days of Ramadan, and that “I have to constantly defend my country’s culture, religion and identity — it’s exhausting.”

Graduate Brendan Deal of Yellow Springs spoke of his search for the definition of an “Antiochian,” including “people who don’t have bags under their eyes — they have luggage,” those who “engage in passionate discussions on the future of the college at 3 a.m. every night,” and those who “can be dropped off in any city or country and within two days have a job and a place to stay.”

Deal concluded that he ended his four years at Antioch with “no idea of what an Antiochian is but I’m glad to be one,” and that he leaves the college more wise and empathetic and “more prepared to face the world.”

And graduate Seth Kaplan-Bomberg entertained the audience with an original song about his experience at the college.

In introducing Dr. Jones, the commencement speaker, Antioch College trustee David Goodman spoke of first meeting Jones during the difficult time following the disappearance of his older brother, Andrew, who was one of three civil rights workers killed in Mississippi in 1964. Goodman’s family was advised to call in Jones, who was an attorney for Dr. Martin Luther King Jr., and Jones later became close to the family.

“I lost a brother who was my elder, but I found another one,” Goodman said.

There were several reasons why he agreed to deliver the college’s commencement address on two days’ notice, after Congressman Lewis pulled out last week following the death of a family member, Jones said.

One of those reasons was his connection to the Goodman family, according to Jones. And the second reason was “Antioch’s innovative and historical place in social justice history.”

While the civil rights movement is more than 50 years old, recent events, including the Charleston massacre, make clear that the need for social justice progress remains huge, he said.

“This nation is still infected and crippled by the twin legacies of slavery and the doctrine of white supremacy,” he said.

While most have ascribed the killing of nine African Americans to the mental illness of the shooter, the massacre was an unmistakable message of intimidation to African Americans, he believes.

“Something has to be done differently,” Jones said, to increase the effectiveness of current protests against racial violence. “We’ve got to get beyond this nonsense of racism.”

Graduates of Antioch College have a special role to play in the struggle for racial and social justice, Jones said.

“Antiochians have a sense of justice and righteousness that is different than most people,” he said.

Jones called on the graduates and the audience to join together and continue efforts to “make America what it was intended to be. Yes, we will make a difference.”

Following Jones’s speech, Roosevelt thanked everyone for their support of the revived Antioch College.

“The road ahead will not be easy, but our obligation to make it happen is deep,” he said.

To conclude the event, the World House Choir sang “I’ll Make the Difference”, including the refrain:

I had the courage to
keep goin’ on.
I had the faith when
all hope was gone.
I had the strength to keep holding on.
I can make the difference, yes I can!