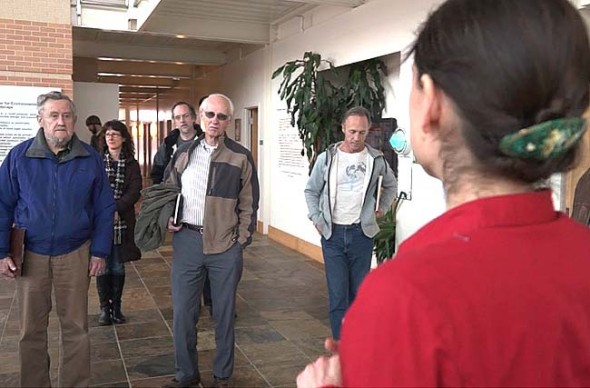 Global climate change will affect Yellow Springs in unknown, but potentially disastrous, ways. The cost of living may rise due to higher prices for imported goods. Food supplies could be interrupted. Less money might flow into the community. And mass migration and civil unrest could disrupt life here, according to the Yellow Springs Quarterly Report on Climate Change recently submitted to Council.

Enter the Yellow Springs Resilience Network, a local group that hopes to insulate the village from the worst impacts of climate change. If the group is successful, then someday 100 percent of Yellow Springs’ energy will come from local renewable sources; 100 percent of houses here will be energy efficient, greenhouse-gas-free transportation will predominate; all food, goods and services will be local and carry a low-carbon footprint; zero waste will be sent to landfills, and the town will have a resilient, vibrant economy and job base.

While the goals are ambitious, organizers say that Yellow Springs is already well on its way to carbon neutrality. It just needs high aspirations, and a strategy to achieve them.

“We want to keep it moving, keep it measurable and keep people motivated,” said Kat Walker of goals of the Resilience Network. “They seem ludicrous, but why not shoot for them?”

Added Duard Headley, who authored the quarterly report, “putting out those goals will force us to look at things differently.”

“It’s not that we can just put up some solar panels or change the kind of cars we drive — those things are important in the near term — but the changes we are talking about are fundamental changes in the way our community is structured and the way that we live,” he said.

The Yellow Springs Resilience Network is a group of villagers, organized by committees, working to make Yellow Springs more resilient, which Headley explained as “the ability to adjust to unpredicted changes.” Shifting from a focus on climate action to resilience was an early step for the group, formed last year after about 50 villagers and Antioch College students returned from a climate protest in New York City in September.

Small groups in the network are now working on food, transportation, waste, economic and building issues, according to Walker. For example, the food committee is looking for ways to expand community garden space and develop the food hub concept; the transportation group is exploring shared electric vehicles for the town; the zero waste committee is engaging in a bulk foods survey and local waste audit; the buildings committee wants to pinpoint the town’s largest residential energy users for retrofits, and the economy group is helping seed a time bank.

Several members of the group visited Oberlin in January to learn how that town of 8,300 was on track to cut its carbon emissions to 50 percent of 2007 levels by 2015. While impressed by the commitment of the city, which spearheaded the project, villagers also returned feeling impressed with how far Yellow Springs has come even without a climate action plan. That’s because villagers have started taking action on a grassroots rather than top-down level, which Headley noted may take longer to reach a critical mass, but is ultimately more sustainable in the long run.

Still, the network members believe that Yellow Springs needs its own climate action plan, which is why they asked Village Council to join Local Governments for Sustainability, formerly the International Council for Local Environmental Initiative, or ICLEI. Membership in that group, which costs $600 per year, comes with free software that is essential to measuring a town’s changing carbon footprint, organizers said.

One factor contributing to Yellow Springs’ carbon footprint is local tourism, the greening of which is the focus of a new “Visiting Yellow Springs Green Guide” in development by the network. The network hopes to promote Yellow Springs as a “carbon-friendly place to visit” by comparing a trip to Yellow Springs with another destination. For example, the guide promotes Yellow Springs’ high percentage of renewable electricity, its walkability and bike-ability, the amount of locally-made products and locally-grown foods here and low-carbon activities like hiking and concerts featuring local music.

“You get outside of Yellow Springs and people are not as conscientious, so if we can catch people while they’re here and raise the awareness, we can really extend the impact beyond just the 3,000 people here,” he said.

Another project the network is pushing is the installation of energy dashboards throughout the community that measure real-time energy and water use and average waste production, which can be compared with past usage and other communities. Antioch College will soon erect several dashboards to measure its resource use on campus, while local nonprofit Community Solutions is applying for grants for municipal dashboards at the local schools and the Yellow Springs Community Library. Already in use in Oberlin, the dashboards are a valuable tool to educate the public, according to the network.

“It’s great because you can see what you’re doing — it makes [our resource use] a little less ephemeral and a little more tangible,” Walker said.

Walker and Headley said that it will take more villagers cutting their individual consumption to make a difference here and that many people are too busy or accustomed to their way of life to change. However, by connecting with others and sharing ideas, Yellow Springers may start to make progress, faster.

“I think folks need to see that our current habits are causing harm,” Walker said. “We’re just so entrenched in our habits even though we’ve been talking about cutting back and cutting waste for decades. By connecting with folks and seeing what’s going on in town, it could help.”

“What we’re not trying to do is to get everyone to sign up, come to a meeting and wear a t-shirt. We’re trying to build a network to help people to make those changes in their daily life. … There are a lot of people making changes on a personal level already.”