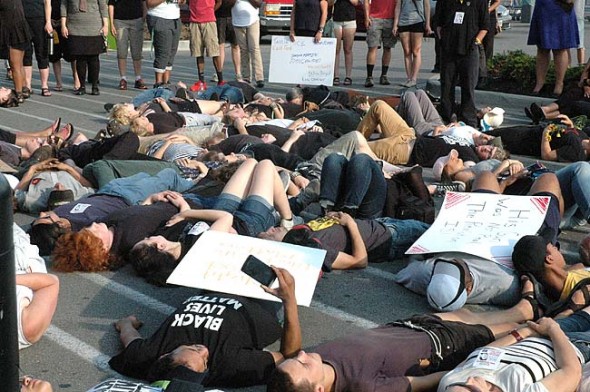 Dozens of people participated in a rally and die-in at the Beavercreek Walmart on Wednesday, Aug. 5, to commemorate the life of John Crawford III, who was killed by police in the store a year ago. The event was organized by Black Lives Matter Miami Valley and included many local residents. (Photo by Dylan Taylor-Lehman)

On Aug. 5, 2015, over 200 people gathered in the parking lot of the Beavercreek Walmart to commemorate the life and mourn the death of John Crawford III, who was gunned down inside the store after a shopper called 911 and reported Crawford had a gun. The gun turned out to be a BB gun Crawford picked up from a shelf in the store, and the officers, who shot Crawford within seconds of their arrival, were ultimately acquitted of any wrongdoing. The commemoration was held a year to the day after Crawford’s untimely death and featured speeches, singing and a march with a hoisted coffin leading the procession.

“We intend to convey to the world that we will remain vigilant in our demand for justice for John Crawford III and those around the country who have also lost their lives,” said the press release accompanying the event. “We will not allow John Crawford to have been killed in vain.”

The rally was coordinated by Miami Valley Black Lives Matter, one of dozens of actions the group has organized since the beginning of the year, and was designed to bring attention to what they see as a lack of accountability in police departments for ‘rogue police.’ According to Black Lives Matter, the shootings — and consistent acquittal of the officers involved — are indicative of racism endemic to the justice system and society as a whole. A list compiled by mappingpoliceviolence.org shows that over 100 unarmed African-Americans were killed by police nationwide in 2014.

Commemorators held signs and banners and wore green armbands as a show of solidarity. Speeches were given, and commemorators held hands and bowed their heads for a moment of silence. Afterward, everyone sang as they lined up in a procession through the parking lot towards the store’s entrance.

“We who believe in freedom cannot rest — until it comes,” they sang.

Walmart closed an hour before the event. The doors were shut and its managers were standing behind the glass, saying only that the store was closed for undisclosed reasons. Employees looked on as a few dozen protestors lay down in front of the store as part of a die-in. The silence was punctuated by sobs and the whirring of a drone camera live-streaming the event. The procession eventually wound its way back to the berm, where commemorators resumed holding signs and winning the honks of supportive passersby.

The chapter’s actions have taken many forms. In February, for example, the group hosted a letter-writing campaign and delivered hundreds of letters and videos to U.S. Department of Justice attorneys considering civil rights charges against Sean Williams, the officer responsible for the death of John Crawford. There have been sit-ins at police stations, a symbolic burning of a Confederate Flag on July 4, and a number of fundraising concerts, potlucks, and poetry readings.

Video of the Walmart rally was posted on YouTube the following day. The movement has been galvanized by social media, which can instantaneously make international news out of things that were once swept under the rug, said Talis X.

Social media has made broader networking possible and fostered a larger understanding overall of the concerns voiced by Black Lives Matter chapters, said Julius Eason, local organizer with the group. “It facilitates storytelling. The black community can tell their stories for once, and determine how they are told,” he said. “Social media is an indispensible tool.”

And this side of the story still needs to be more broadly understood, organizers believe. Commemorators taking part in the rally were visibly shocked by people who, during the silence accompanying the die-in, pushed their way through the demonstration to try to get into the store. Fox News coverage of the event focused on the inconvenience the rally posed to shoppers. Their featured interviewee said “It’s sad what happened to him, but why do we gotta pay for something that happened a year ago?”

Moreover, the acquittals of a significant number of police officers involved in fatal shootings speak for a system that is slow to change, despite what is captured on video, organizers say. “Sean Williams, the police officer who shot Crawford, was cleared by the grand jury and is now on desk duty,” said Moyenda.

In a few instances around the country, legal action has been taken against officers involved in fatal shootings. Michael T. Slager, a North Carolina officer who shot Walter Scott in the back eight times, was charged with murder in June. Ray Tensing, the University of Cincinnati officer who shot Sam Dubose in the head during a routine traffic stop in July, was indicted for murder and voluntary manslaughter. But this is only the beginning of the process, not a guarantee of the accountability sought by Black Lives Matter, said Talis X.

“An indictment is just basically the first step. It doesn’t even mean that they’ll get charged. It’s good when someone gets indicted but justice will be served when I hear the judge say ‘guilty’ and slam the gavel,” he said.

But in the case of John Crawford, even the actions of the 911 caller were never called into question, said Moyenda. He explained that the caller retracted the statements he made about Crawford pointing the gun at people when confronted with the video of Crawford standing by himself and talking on the phone, but the caller and his motives were not investigated further.

“I don’t know how anyone could watch the video and not have a problem with what went down,” Moyenda said.

The Walmart rally was one in a series that brings attention to the complex issues behind racial injustice. Talis X explained that the group’s actions over the past year have built bridges with a variety of people and organizations, which will result in greater numbers and resources standing in solidarity against the local and national climate of discrimination.

“People are waking up slowly but surely. There is much more awareness and dialogue about systemic racism and the institutional structure of the police. This is success in the big picture, but there still is a lot more work to be done,” said Eason.