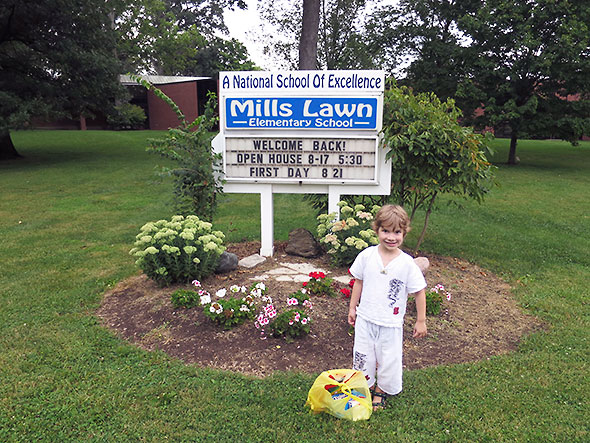 The academic year has started up again at Mills Lawn and, on the Monday before the first day of class, we took our son to the elementary school’s open house. He seemed to enjoy the ritual at first. When we paused in front of the school marque on the south side of campus, he teased us by putting on a big silly face…”like David” he laughed of No, David! fame. 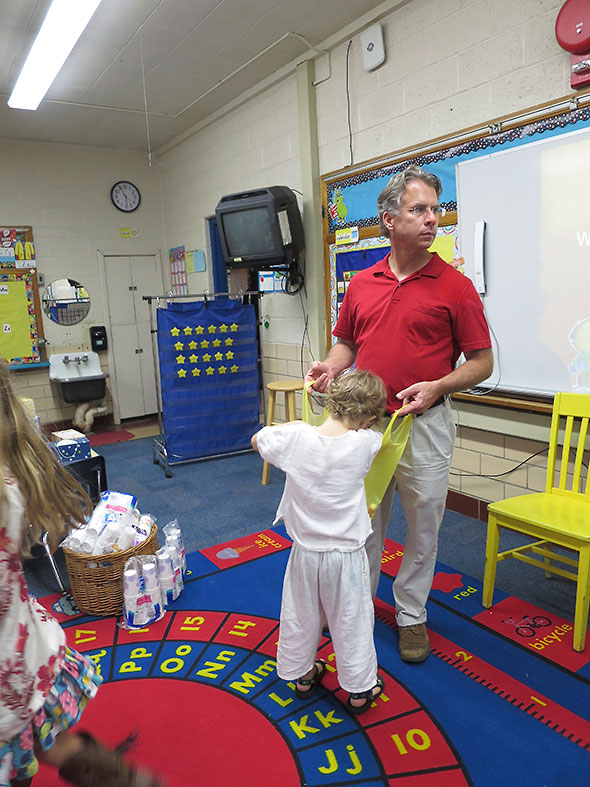 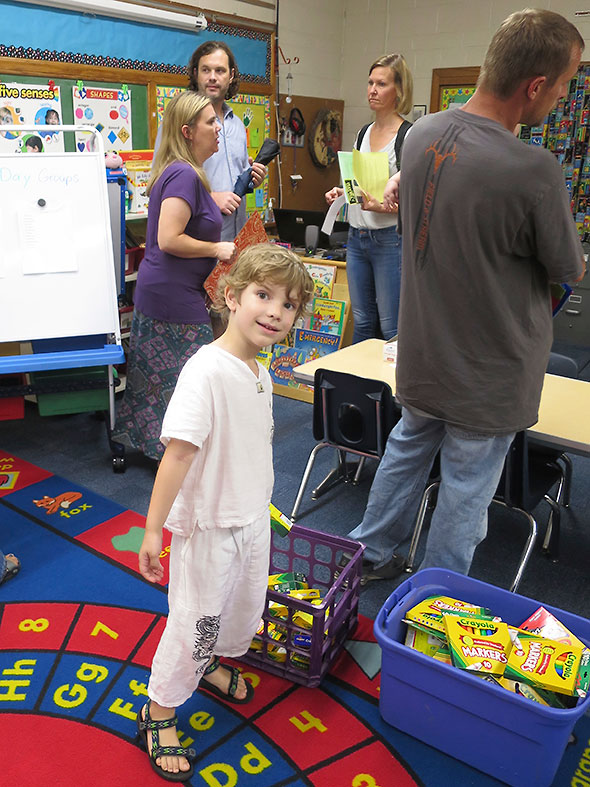 Then, he bounced about his classroom matching his contributions of school supplies to the proper bins. Again he’d tease his parents: “This one? No! This one? No, silly! This one, yes!” 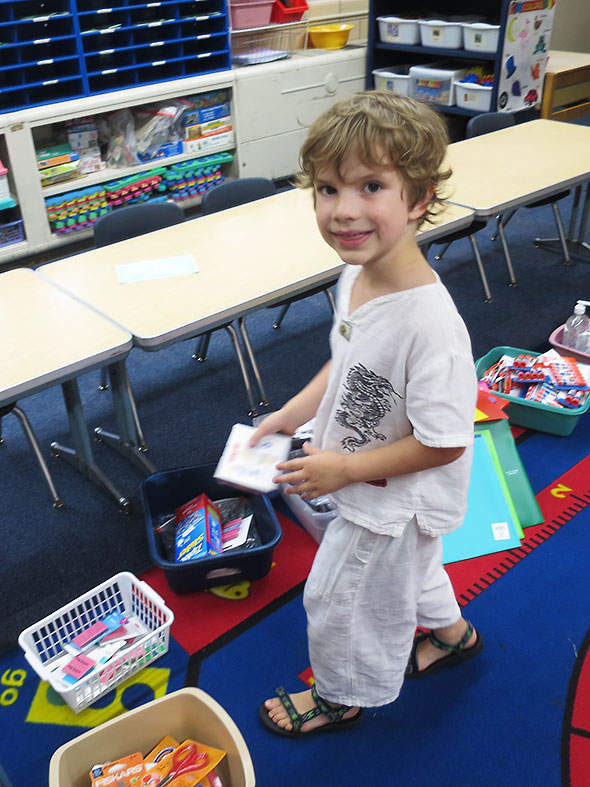 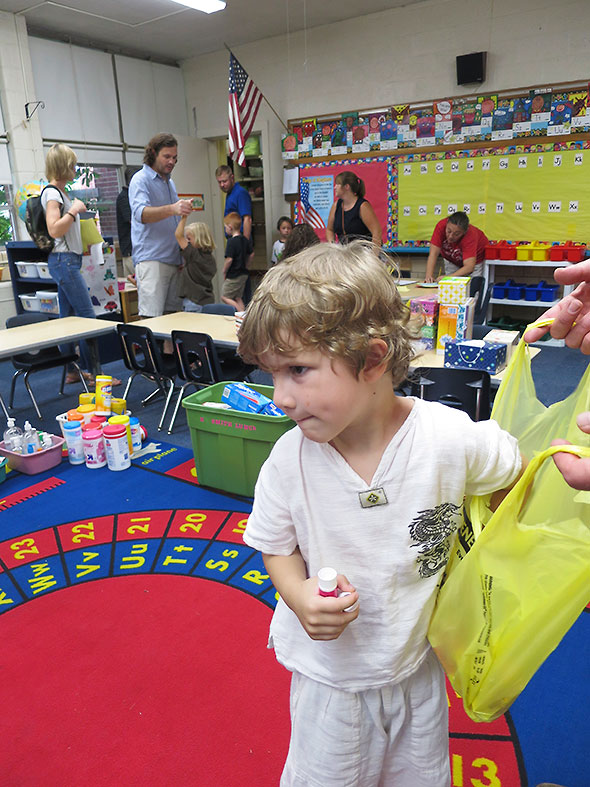 I was surprised then when we returned home that night and he asked if he could sleep with us in the master bedroom. He’s pretty keen to sleep in his own bed and, if he wants a parent to join him there, his father is his favorite teddy. So when he snuggled up tight to me, I suspected something was wrong. I held him close that night tucked under my chin. When I asked him how he was feeling now, he didn’t answer with his standard “I’m fine”. My five year old said something distinctly different. “I’m nervous.”

Ok. Well. This moment is the one in which I seriously doubt my parenting instincts and the wisdom of dropping the line “We’ve got to get you ready for Kindergarten!” repeatedly. For quite a while now, his parents have been talking up Kindergarten and not just his parent: his sister, his friends, grandparents, teachers, coaches, librarians, even random strangers. This milestone is a big deal, and…news flash…he gets it. 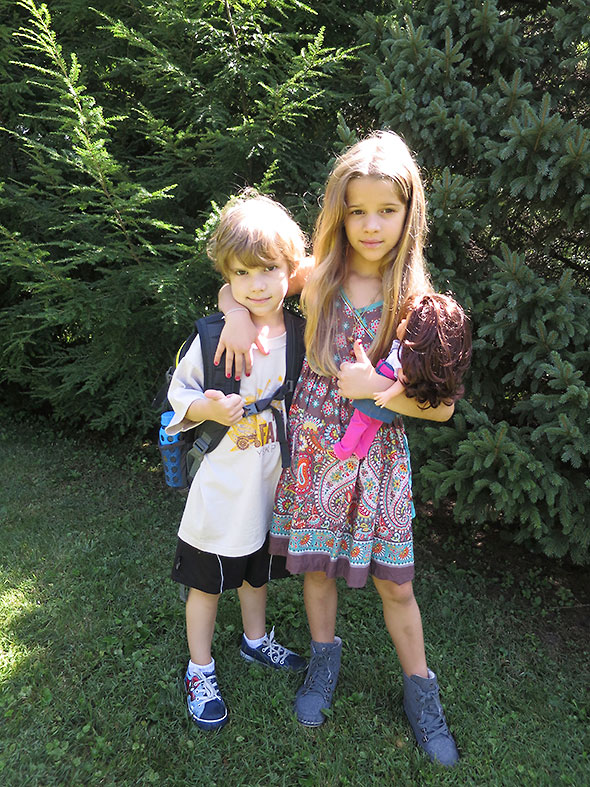 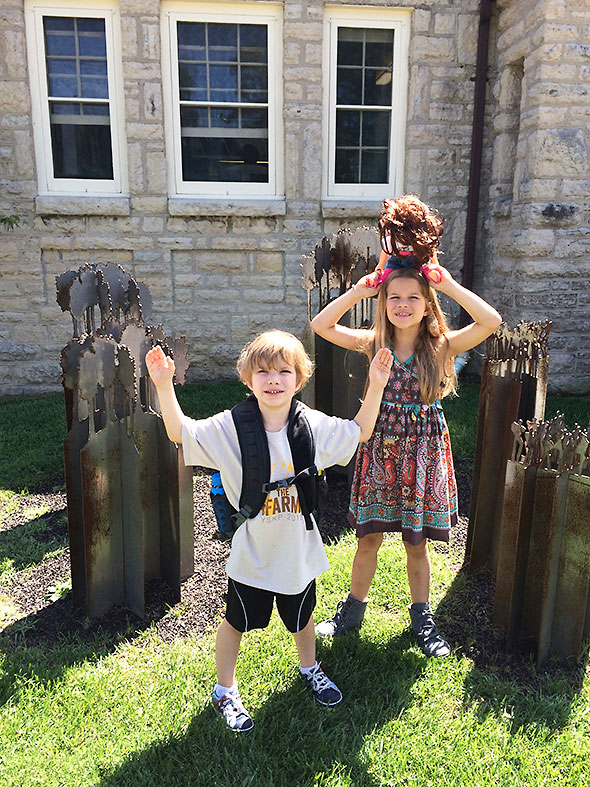 He stayed close for the rest of the week, asking for hugs and squeezies, joining us in the master bedroom at night, breaking cleanly from his usual nocturnal routines. His first day was to be a half day in the afternoon. So we slept in and planned to ride to the school as a family. Getting dressed that morning, he matched his father’s choice and picked out his Save The Farm t-shirt to wear. We loaded up a backpack with a form-stuffed yellow folder and one contraband item, a palm-sized Lego police car. In the front yard, he posed with his sister to mark the occasion. They both gave me the thumbs up and, nervous or not, we headed in. 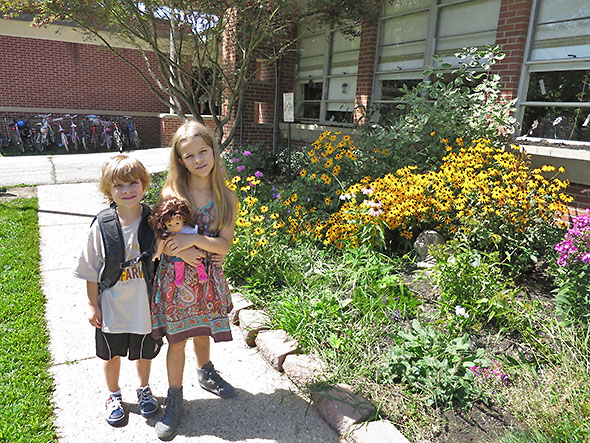 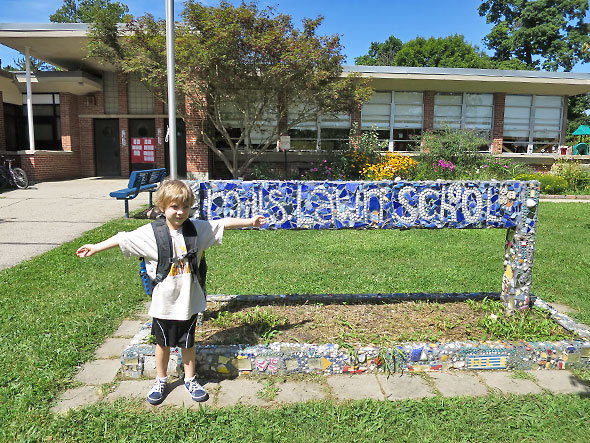 On the way, his sister tried coaching him on the school song. She sang Mills Lawn is Like a Red Brick Garden once through for him, but he demurred. Nearing the school, we walked west on Short Street toward the school stopping by the superintendent’s building, then at the Mills Lawn’s mosaic lawn sign, and finally before the garden that our daughter’s first grade class prepared using “adult tools”. The late-summer flower bed looks spectacular; it is ablaze in black-eyed susans and peppered with bright purple stock, snapdragons, and echinacea. 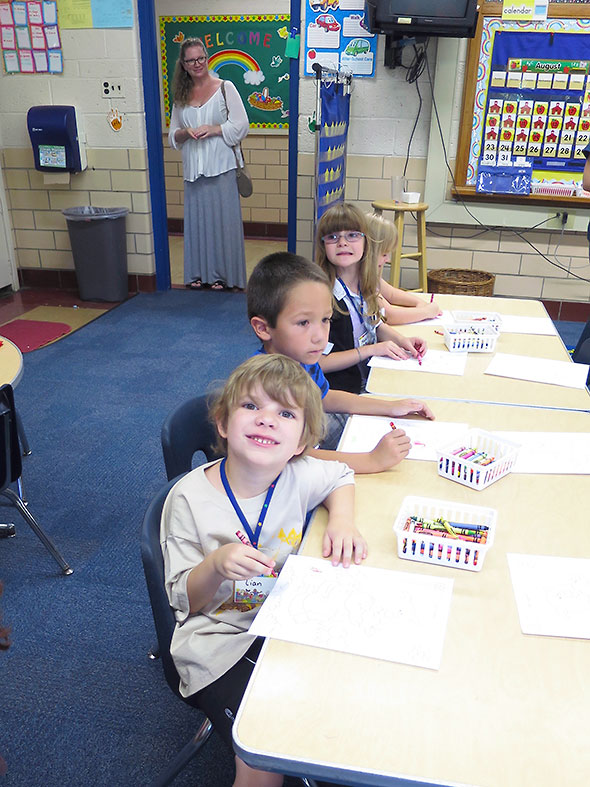 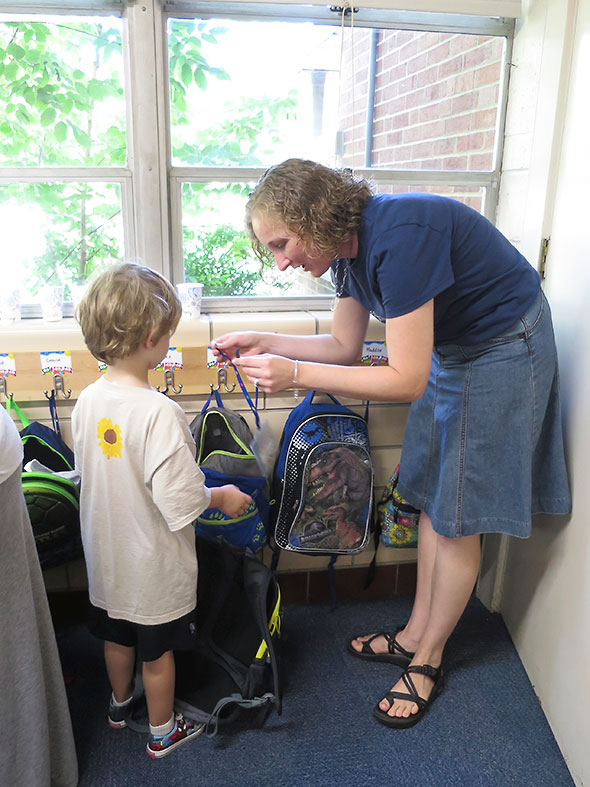 At the front door, We traded outside for in with a couple of parents, and we walked past the front office and into Mrs Turner-Smith’s Kindergarten classroom. There we were greeted by Jen Clark—family friend, our son’s creative dance instructor, and now special education teacher at Mills Lawn—waiting inside. Mrs Clark welcomed our son into Mrs Turner-Smith’s class and led him to the wall hooks labeled with children’s name. He followed her instructions and removed his yellow school folder from his backpack, hung up his backpack on its matching hook, and placed the folder in its bin. He sat down at a table and began tracing out the pig on a coloring sheet with a red crayon. After a couple of friendly nudges, I took the hint and collected my daughter to head out the door. 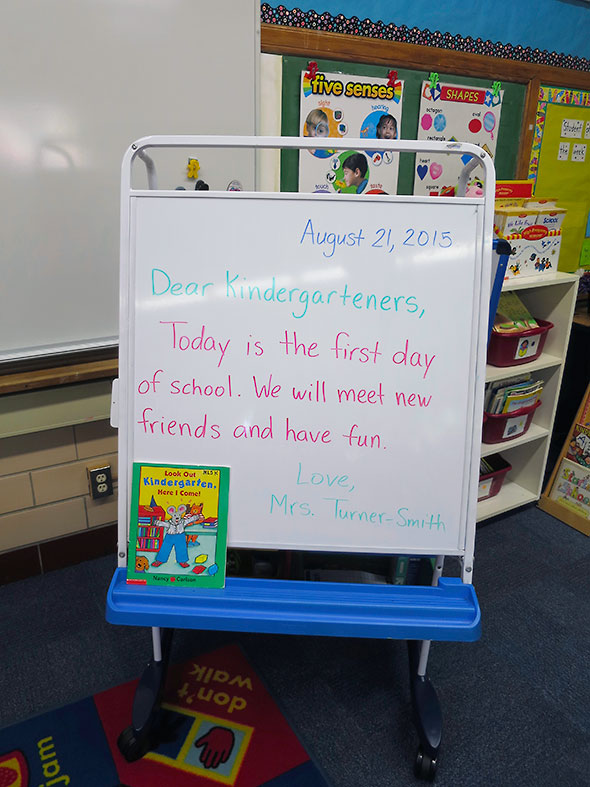 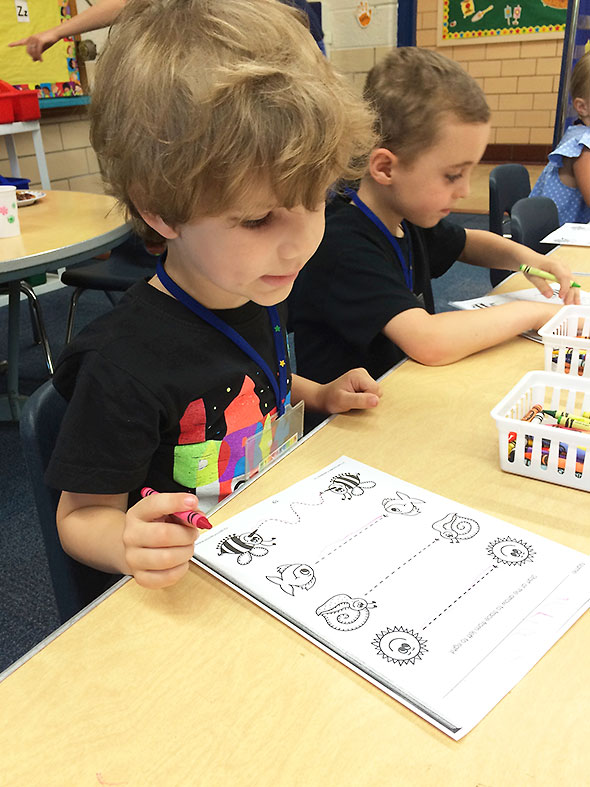 When he got home that afternoon and started tinkering with his Legos, our son started a conversation playing the part of his own parents in addition to his own self. He opened with the line: “So, how was your first day at school?” With barely a pause, he answered his own question, “I cannot say because I don’t know these things.” Though unexpected and awkward in their delivery, his words rang true…and, again, I wondered how much we had unnecessarily elevated his expectations. As he’s gained more experience with this Kindergarten thing and proportionally a more positive opinion about how well things are going, his aspect has improved. Thursday, as we walked home from school, he repeated the line “So, how was your day at school?” and again answered himself. This time, he said “Ok, I guess. I don’t know.” In follow up, however, he cited a source and made clear that he was quoting a movie. “That’s from Inside Out,” he told me brightly. Both his tone and its implication brought me up short. 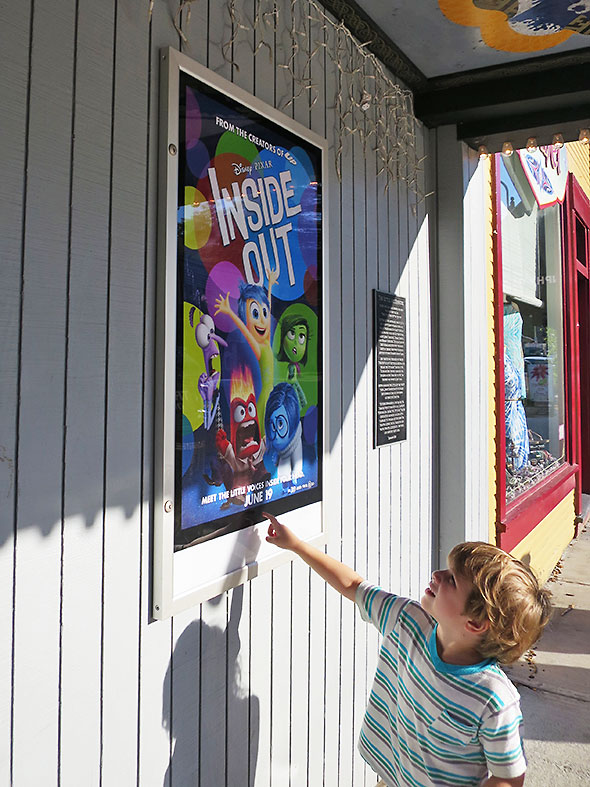 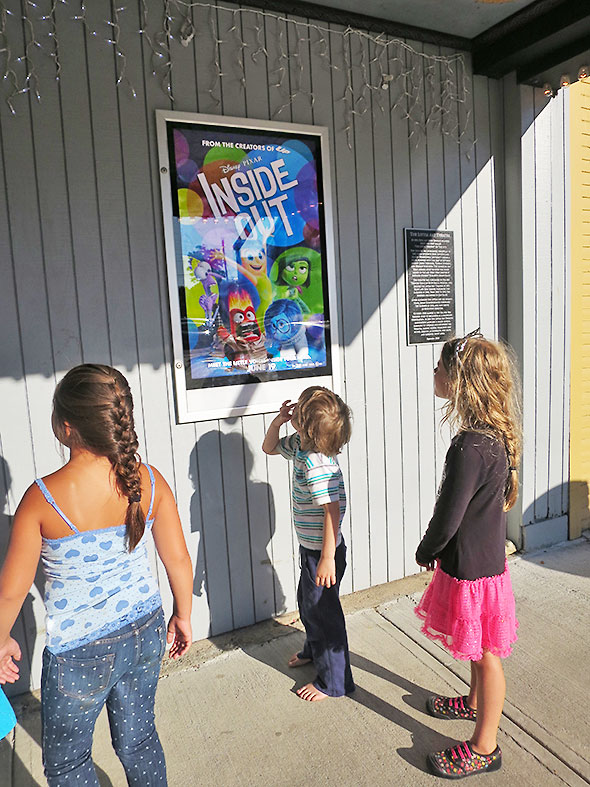 We had just seen the Disney film at the Little Art Theater in early August. At the time, Jeremy and I thought our son uninterested and ambivalent. The film portrays the emotional upheaval of a young girl traumatized when her family uproots from small town Minnesota and transplants to crowded San Francisco. The girl’s churning emotions—Joy, Sadness, Anger, Fear, Disgust—are played out by cute cartoon characters. Even so, the inner workings of a person’s emotional life seem far too abstract of a subject for a five-year-old. We were skeptical that our son could relate. Clearly, we miscalculated. He found at least one moment of resonance. Following the daughter’s first day at her new school, she has a rough time conveying her profound sense of loss at the family dinner table. She had lost Joy and Sadness. Within her, Fear and Disgust improvise madly in an impossible attempt to not alarm the young woman’s parents. The family’s moment of difficulty plays out like farce but reflects in fact stark cathartic reality.

The question “How was your day?” requires a complicated honest answer. My five-year-old understands now the utter inadequacy of “I’m fine”. Does this revelation seem like a small step? To me, it feels like a milestone.