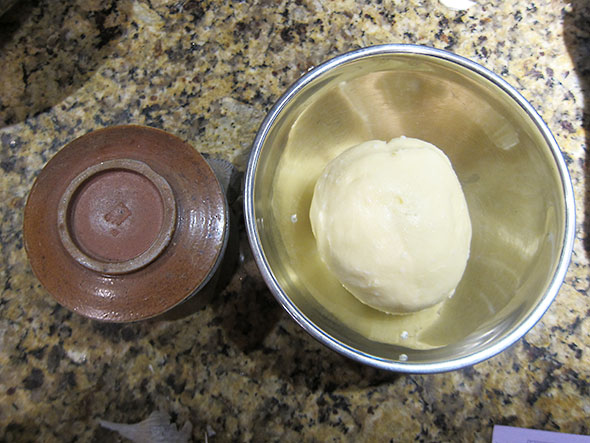 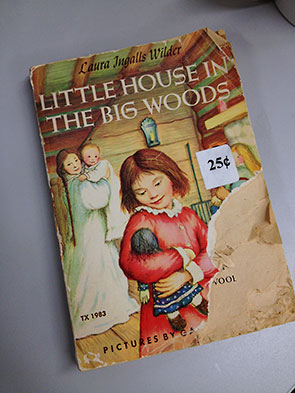 Instead we provided beverages. Our family brought four quarts of Snowville whole milk. We enjoy Snowville’s creaminess, and several parents were grateful for the alternative to juice. Still I knew there would be leftover and showed up at the end of school to collect the remainder. Little did I know but the Snowville theme was to continue.

My daughter is signed up for two after school enrichment classes offered by Mills Lawn. Thursday’s class is Pioneer Days in which Jen Clark and her students practice pioneer skills inspired by the Little House books. This week’s inspiration was a passage from Little House in the Big Woods, the first book in Ms Wilder’s series. Here, Laura Ingalls Wilder recounts a morning with her mother and sisters churning milk. She notes how the texture of the milk changes as her mother churns until finally the butter forms. Then, her mother molds it into butter pads embossing each with a tiny strawberry and leaf pattern. 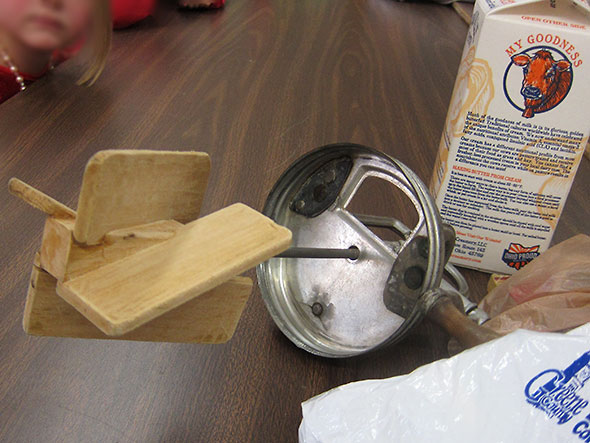 Jen Clark is a good friend and, when she announced that the children were making butter, I found an excuse to linger. On the admitted ruse of being helpful, I ducked my head into the classroom announcing I had a couple of quarts of milk on me. Jen informed me quickly that the exercise required cream. She had in fact lots of whipping cream—a whole gallon. It is rare to be able to purchase so much cream from the supermarket but we are very fortunate to be in the market area for Snowville Creamery. Most creameries sell whipping cream by the pint. Snowville sells it by the half gallon and frequently teaches classes on how to make butter from the cream in the Columbus, Ohio area. 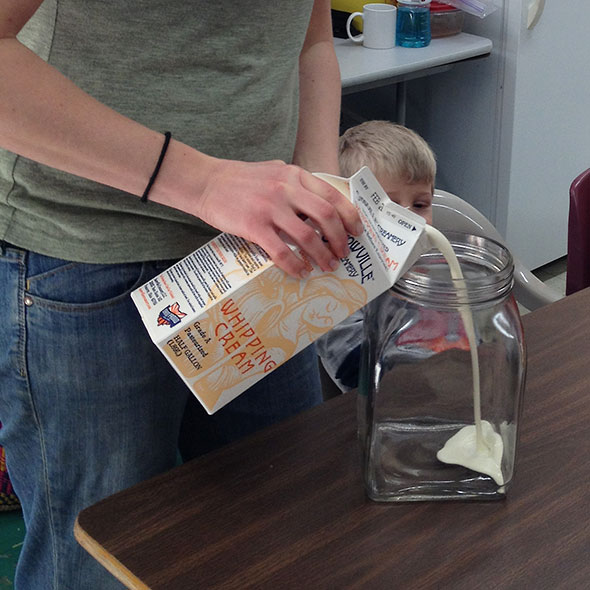 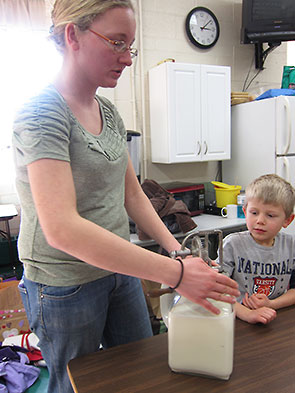 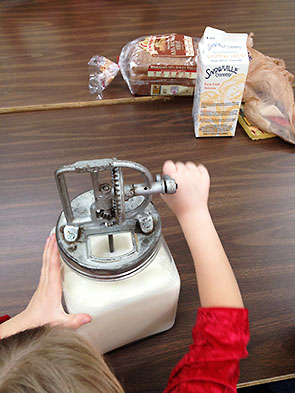 Jen had borrowed a 4-gallon glass churn from another friend of ours, Carol Cottom. The churn belonged to Carol’s grandmother. The children were counseled to be careful with the antique glass and wooden paddle, and they proved responsible and attentive in their care. On Carol’s advice, Jen poured in 3 gallons of thick whipping cream, screwed on the lid, and passed it around the table for each child to take it for a spin. We all had to chip in as the process would take about the whole class period…we hoped. 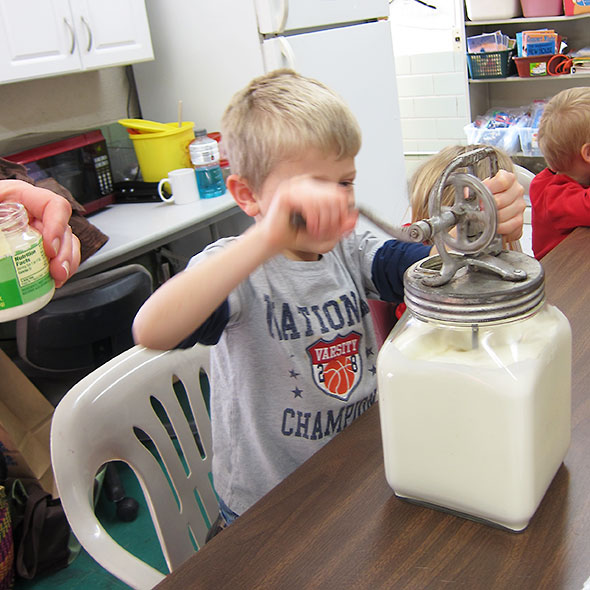 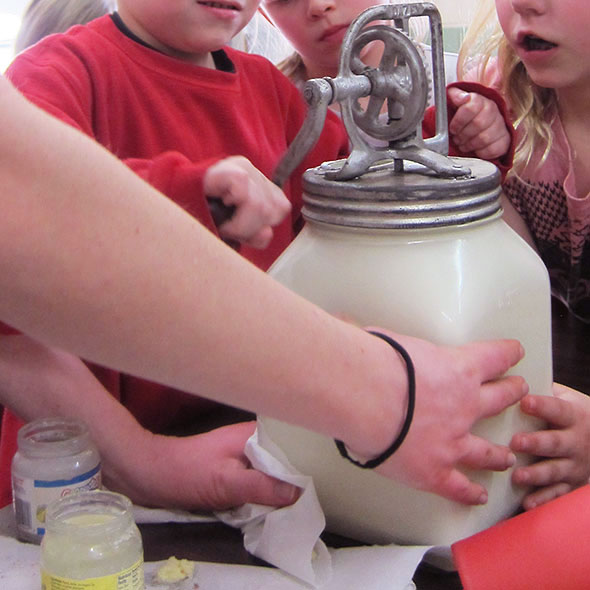 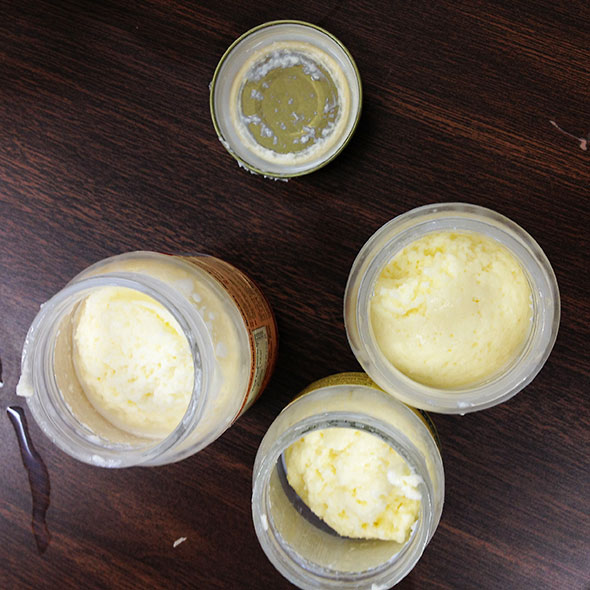 To keep the class fully engaged, Jen filled several small baby jars about 3/4 full of whipping cream. All we had to do with these jars is shake. Butter forms when cream is agitated, and Jen told us how pioneers used to milk their cow in the morning and hang a bucket of cream on their wagon and by afternoon, after bouncing a few hours on the trail, they would have butter in the bucket.

The cream in the baby jars progressed well within twenty minutes. The cream in the larger glass jar advanced more slowly through its stages. Churning butter is a fickle business. Temperature is one key. Jen had let the cream warm up to about 50 degrees before we started, and the baby jars had the advantage of gaining warmth from our hands. Indeed, we first noticed the cream in the baby jars expanding. The shaken cream filled the jars to full. Then, after about 5-10 minutes, the cream changed in structure becoming less like a smooth whipped cream and more like the grains that Laura Ingalls Wilder described seeing at her mother’s churn. Suddenly, one of the older boys shouted in triumph for his jar now contained two substances instead of one. A barrel shaped butter pad filled most of the jar swimming in a small dose of buttermilk. The children shook the five other jars with renewed vigor. Jen began toasting bread as the other jars churned their contents to butter one by one. We spread the creamy butter onto toast wedges and poured the buttermilk into cups. The children were soon engrossed in tasting the treats that they made.

After a few minutes distracted by the tasting, I found one jar of whipped cream sitting forgotten on the table. The jar had leaked slightly in shaking so the children set it aside. I picked up its cause and, churning its contents, witnessed for myself through the glass how the curds formed over a couple of minutes and then…in a flashing moment…released the buttermilk. 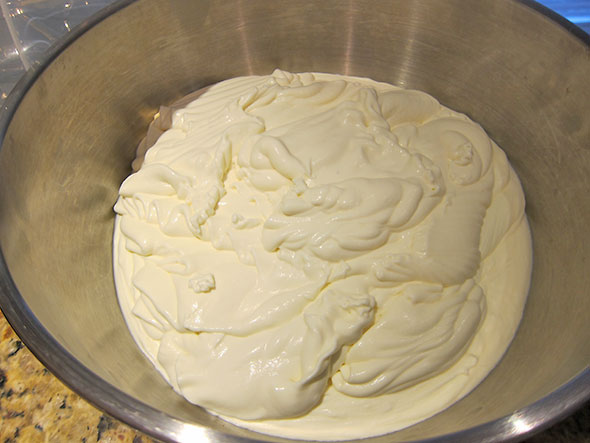 All the while, we continued to take turns with the 4-quart glass churn. We decided that, since the baby jars had the added advantage of gaining warmth from our hands, we should huddled around the glass jar to try and heat up its contents. We did this for the final 10 minutes of class; but, alas, we did not yet reach that golden moment where the butter and milk separate. 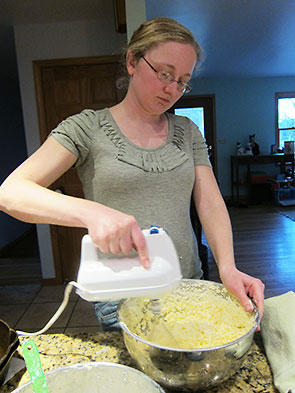 The children dispersed, and Jen and I collected our children and took the glass churn back to my house. After bouncing in Jen’s car, the mixture had thicken further. If only I lived farther away! Jen, not wanting to test the antique wooden paddle further, recommended that we break out the electric mixer. I poured the four quarts of whipped cream into two bowls, and Jen took the honors of beating out the butter using Grandma Rita’s electric mixer.

Jen used the mixer’s whisk attachment and after a mere minute began forming curds from the cream. It took another two minutes and then, again, the mixture suddenly collapsed into the butter and buttermilk. It’s interesting after several years of creating batters with a mixer to see how one can cause separation with essentially the same process. 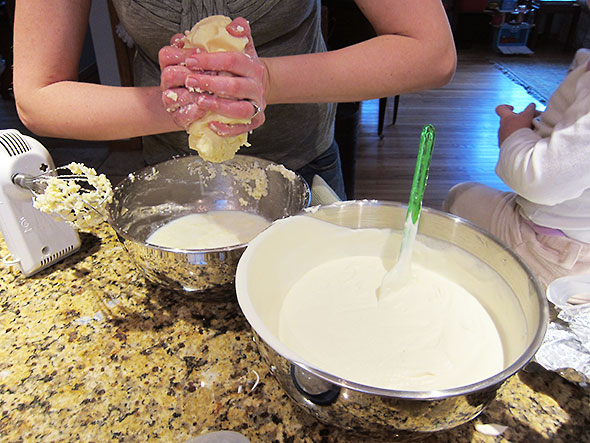 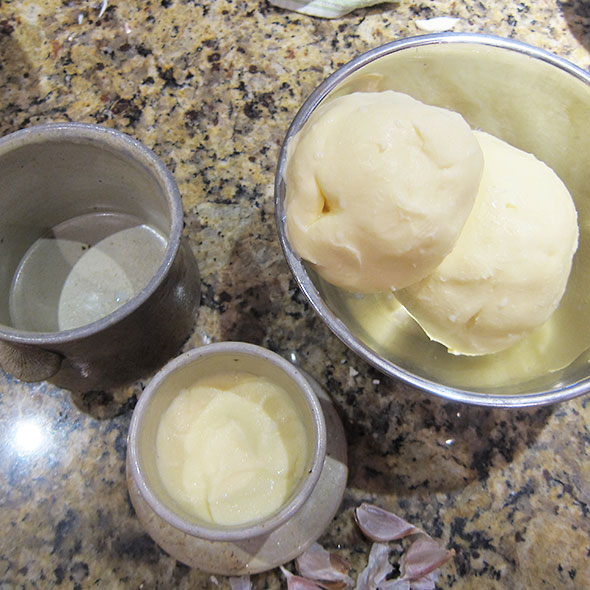 Jen molded the butter into balls and I weighed our results. One gallon of whipping cream made over three pounds of butter and two quarts of buttermilk. My daughter’s share of this bounty was about a quarter pound of butter, and we molded her portion into a french butter dish from Miami Valley Pottery. 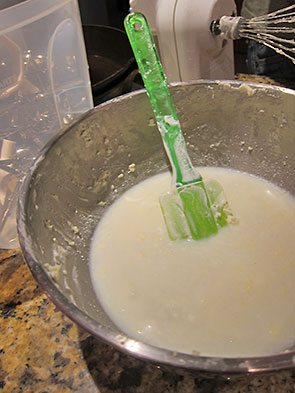 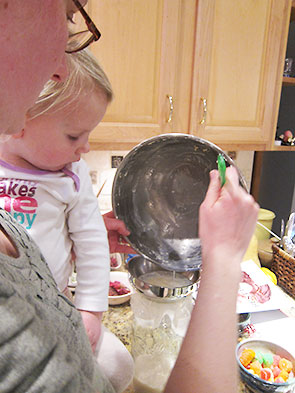 Turns out making butter doesn’t take much more than a bell jar, a half hour’s worth of enthusiasm, and a bit of warmth. 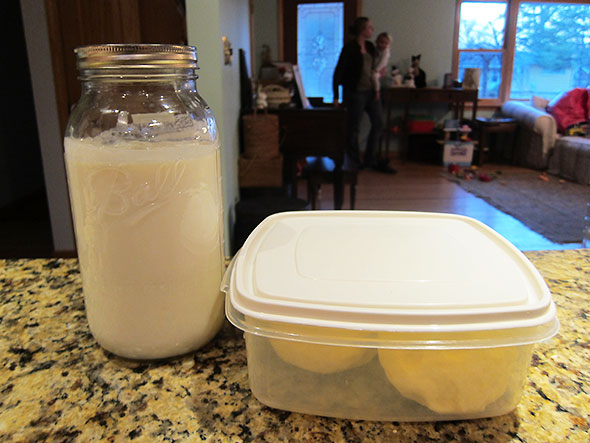