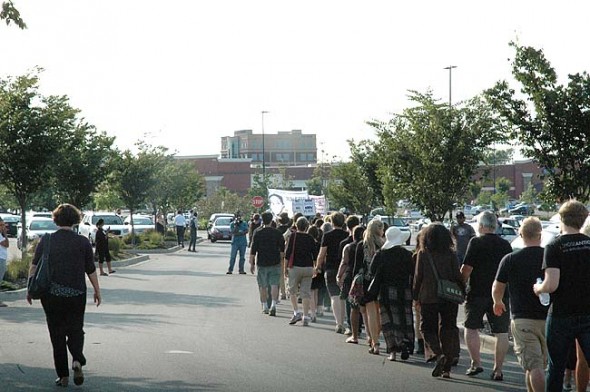 Commemoration remembers John Crawford III one year after his death 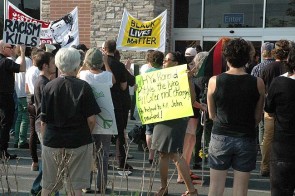 August 5th, 2015 was the one-year anniversary of the death of John Crawford III, a 22-year old man gunned down in the Beavercreek Walmart for holding a BB gun he picked up from a Walmart shelf. He was talking on his cell phone in the pet department, alone, when a shopper called 911 and reported he was pointing the gun at customers. Police were close by and stormed in, shooting Crawford immediately.

Crawford’s death was one in a series of shootings of unarmed black citizens by police, a morbid phenomenon whose latest victims include Sam Dubose, killed at a routine traffic stop in Cincinnati, and Sandra Bland, who died in police custody in Texas. The shootings – and consistent acquittal of the officers involved – are indicative of racism endemic to the justice system and society as a whole, according to members of Greene County’s Black Lives Matter chapter, which organized an event at the Beavercreek Walmart to raise awareness of the fate Crawford met and why.

“It’s not a demonstration,” said Bomani Moyenda, “it’s a commemoration of a young man who tragically lost his life.” 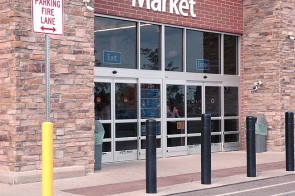 Walmart closed an hour before last night’s event. The doors were shut and its managers were standing behind the glass, saying only that the store was closed for undisclosed reasons. A parade of customers walked to the doors and were turned away, and the parking lot was unusually empty for 6 o’clock on a Wednesday, aside from the news vans taking up one corner. The customers did not take the closing well and complained about the inconvenience, yelling across the parking lot at the demonstrators about the injustice they were suffering at not being able to shop. One man yelled so loudly that his children started crying. 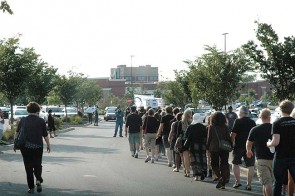 Over 200 people gathered on the berm separating Walmart’s parking lot from Pentagon Boulevard. There were signs and banners and green armbands worn as a show of solidarity. Speeches were given, and Moyenda asked the commemorators to bow their heads in a moment of silence. Afterwards, everyone sang as they lined up in a procession through the parking lot towards Walmart’s entrance. The people at the front of the procession carried a coffin. 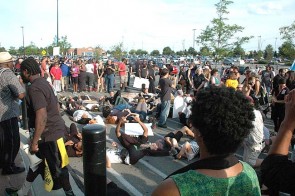 A die-in was scheduled, and a few dozen commemorators laid down in the parking lot in front of the entrance. A few participants were moved to tears and a few were shocked by the people who pushed their way through the demonstration, during the silence accompanying the die-in, to try to get into the store.

After the die-in, the coffin was hoisted, more songs were sang, and the procession filed back towards the berm, where it resumed holding signs and winning the honks of supportive passersby.

The grief expressed by Black Lives Matter was echoed in a different way by a group of demonstrators who set up shop at the other end of the berm. Members of Ohio Open Carry held signs also decrying the injustice of John Crawford’s death, but their dispute was with the way the police handled the sight of a man (ostensibly) carrying a gun in public. Ohio is an open carry state, meaning that even if John Crawford was carrying a real gun – which he wasn’t – he was legally allowed to do so. 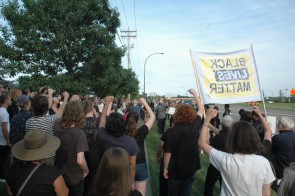 Both groups’ ire stems partly from the fact that no charges were brought against anyone involved in the shooting.

“Sean Williams, the police officer who shot Crawford, was cleared by the grand jury and is now on desk duty,” he said. “And no one has addressed the 911 caller’s behavior — not the police, special prosecutor, not the bureau of criminal investigation.” Moyenda explained that the caller retracted the statements he made about Crawford pointing the gun at people when confronted with the video of Crawford standing by himself and talking on the phone, but the caller was still not investigated further.

“I don’t know how anyone could watch the video and not have a problem with what went down,” Moyenda said.