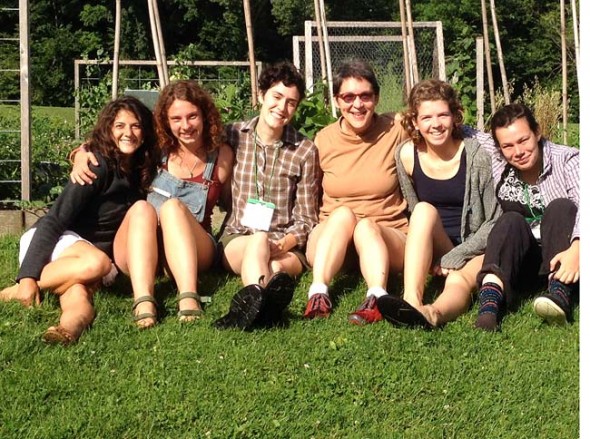 Here in the heart of industrial agriculture, a quiet revolution has begun. It’s small-scale, and plans to stay that way. Its dimensions are measured not in acres, but millimeters. (Submitted photo)

Here in the heart of industrial agriculture, a quiet revolution has begun. It’s small-scale, and plans to stay that way. Its dimensions are measured not in acres, but millimeters. Some of the revolution’s most diminutive members are smaller than the period at the end of this sentence.

The revolution is seeds.

Seeds are a powerful “under the radar” aspect of the local food movement, according to Beth Bridgeman, instructor of cooperative education at Antioch College. This fall, she is leading an effort to raise area residents’ seed consciousness. In collaboration with the Rocky Mountain Seed Alliance, Bridgeman is organizing “Seed School,” a six-day introduction to growing, saving and sharing seeds geared to gardeners, farmers, chefs, students, activists, local policymakers and anyone at any skill level with an interest in local food and sustainable agriculture.

“We’re hoping people come from across the Miami Valley and beyond,” said Bridgeman in a recent interview. Seed School will take place Sept. 29–Oct. 4 at the Vernet Ecological Center in Glen Helen. Seeds used in the school will be harvested from the Antioch Farm across the street.

“It’s where food begins,” said Bridgeman. Consider a locally grown tomato. It could be grown from seed ordered from a seed catalogue — or it could be grown from seed that has dozens or even hundreds of years of history in Miami Valley soil. In the latter case, said Bridgeman, the tomato would be well-adapted to local conditions. And it would carry what she calls “seed stories,” the histories of the people who’ve grown and saved that variety’s seeds through the years.

“There are lots of seed stories in the Miami Valley,” said Bridgeman, who previously worked as an educator in Greene County’s OSU Extension. “This is particularly true in immigrant communities. People who arrive from elsewhere want to eat their own food. They may have brought seeds from their native countries, or they may source and save seeds from plants that resemble their native foods.”

Local seeds have benefits beyond the cultural. “Here in the Miami Valley, we’re zone 5B/6A,” said Bridgeman, referencing the USDA’s regional Hardiness Zones — and noting that the shift in zones is underway because of global warming. “That’s the same zone as Denver!” Plants growing in our region will experience conditions very different from those of dry, mile-high Denver, despite the common zone designation, and seeds harvested year after year from locally grown plants will adapt, over time, to our particular climate. That means greater hardiness and potentially better natural defenses against pests.

To Bridgeman, another compelling reason to plant and replant from local seeds is food security. “I’m learning that you can’t have food security unless you have seed security,” she said. A food security committee she serves on in Dayton has been talking recently about the idea of “disruption” in food systems. “When food is coming from 500 miles away and there’s a breakdown in the grid or transportation system, that’s a problem,” she said. “The closer you grow to home, the better.”

Seeds themselves are under threat. “Ninety-seven percent of seed varieties have been lost since 1900,” said Bridgeman. This is a consequence of market dynamics, she added. “As seed companies have gotten larger and agrichemical companies have taken them over, research has increasingly focused on just a few varieties.” Rather than hundreds of tomatoes, many consumers have access to just half a dozen on grocery shelves. Currently, the six biggest agricultural companies own 85 percent of seed companies, she noted.

Many traits are now introduced through genetic modification, she added. Different from the hybridization that happens in nature, and the breeding for specific traits that people have undertaken for centuries, genetic modification involves the insertion of genes from one variety or species (sometimes even crosses between plant and animal) into another. Seeds of genetically modified plants carry the new genome, representing a life form “unseen in nature,” said Bridgeman.

Saving and planting local seeds is one way — at a fundamental level, the way — to restore regional biodiversity and take back control of seeds from corporate producers. “I’m a big proponent of seed sovereignty and agricultural democracy,” Bridgeman noted.

This summer, she and five Antioch students, all of whom work on the Antioch Farm, attended the Seed Savers Exchange conference in Decorah, Iowa. Seed Savers Exchange is one of the largest nongovernmental seed banks in the United States, and the annual conference helps collect and disseminate thousands of heirloom varieties for preservation, scientific study and gardeners’ use.

Anthea Van Geloven, ’17, said she was amazed to realize how much the plant and animal breeds we rely upon for food have been manipulated by humans. “Nothing is anywhere close to what you would find in the wild,” she said.

Both students came back enthusiastic about seed saving, which is the heart, or germ, of Seed School. “We’ll teach people about winnowing, pollination, and harvesting. There will be accessible learning about seed genetics,” said Bridgeman. Her goal is to grow a seed-saving community — one that will flourish well beyond the course.

Seed saving is an art and science that’s as old as agriculture itself. Before seed catalogues and their online counterparts, people saved seeds from one planting season to the next, and shared them with their neighbors. In recent times, such informal seed-saving communities have been augmented by more organized efforts. Some public libraries are creating “seed libraries,” said Bridgeman, using old card catalogues to hold seed packets and information gathered about seeds’ origins. “Open drawer B, and you’ll find Detroit Red Beets.”

Seed banks, such as Seed Savers Exchange and others around the world (the USDA maintains a massive one), are the broadest and most formalized seed-saving communities. Two seed savers from Cleveland, whom Bridgeman met at the Seed Savers Exchange conference, are launching the Cleveland Seed Bank, the only such effort in Ohio.

But all it takes to start a seed-saving community is a few people — knowledgeably — swapping seeds. “Seeds should be available to everyone,” said Bridgeman. At Seed School, and in the communities it sows, the power of these tiny revolutionaries will be.

Beth Bridgeman at bbridgeman@antiochcollege.org. Early-bird registration (before September 1) is $600, which includes all classes and meals. Partial scholarships are available.