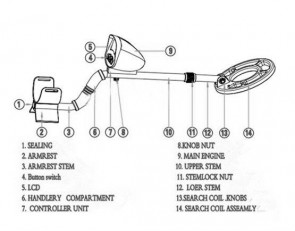 BLOG — Vignettes from around town

Hello! This is the first installment of a new blog that will be chronicling the lesser-known happenings of Yellow Springs. It will feature vignettes from around town and in-depth interviews with people about their jobs and hobbies. I want to present these stories because they are fascinating and partly because I’m nosy – to paraphrase Studs Terkel, I love hearing about what people do all day and how they feel about what they do.

As Art on the Lawn drew to a close late Saturday afternoon, Rita Hoffman and Mark Alexander were not looking in the last open booths but in the pathway between them, running their metal detectors over a few square feet of grass. Hoffman’s detector seemed to indicate something, and

she set it down and crouched to get a closer look. She produced a small trowel and dug around a bit, flipping over a flap of grass. She then took out a black plastic wand and poked it into the divots she made with the trowel. Alexander continued scanning with his detector around the perimeter of the flap.

Hoffman’s wand is a hand-held detector with a sensor on the end. When the sensor touches metal, the apparatus vibrates pleasantly. Upright metal detectors can sense about six inches down, and the handheld detectors are employed for a little more precision. They searched for a little while but nothing turned up, at least not in that patch of the park. Either way, it was a nice afternoon.

Hoffman and Alexander had on utility belts and gardening gloves and sun hats. Their belts held trowel and a few other supplies. “His equipment is a little nicer than mine,” Hoffman said. She pointed out that instead of a handheld wand, Alexander’s detector had a little removable baton attached to the control housing by a wire. It was the tool of a serious hobbyist.

“We’ve found a lot of jewelry. Rings that have fallen off, or an earring. When we find things, it’s usually money. A lot of change,” said Alexander. “Like this – “ He reached into a pouch on his belt and produced a giant quarter, a metal replica about the size of a coaster. He laughed. “I did find a quarter from 1892, though,” said Hoffman.

The fairway was a logical place to detect. They were looking for things that might have been left behind by patrons of the art fair. If anyone lost something valuable, there was a good chance it would be located via detector. In fact, a lot of metal detecting is done not for financial gain but for the thrill of the find. Sometimes the thrill has altruistic applications. “Every town has a metal detector club,” Hoffman said, “and if you get in touch with them and tell them you lost something, a bunch of people will volunteer to help you find it.”

Their own search resumed a few feet down from the previous spot. It was a search for leisure’s sake and not necessarily one with a particular treasure in mind. Hoffman scooted over and dug gently into a new square foot of grass. There was a lot of park to metal detect.

If you were walking in the woods the other day, the sound of sticks whistling through the air could be heard, followed by a hollow clatter and the occasional cheer. A few people were gathered to play what they call ‘Sticks,’ a game involving a fair amount of throwing sticks. The game is homegrown, and has been played pretty heavily in Yellow Springs for the past three summers. Games are organized whenever players feel like it and played at a location known only to participants. 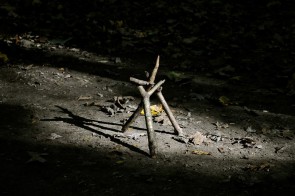 he object of the game is to knock down a pyramid of sticks called a ‘castle’ with a bigger stick thrown from about fifty feet away. Points are awarded based on how the castle is knocked down. Players are split evenly on both ends of the playing field, but there are no teams; every player scores for him- or herself.

Basically, a direct hit is six points and a bounce hit is five. If the stick lands in the circle, the thrower gets one point. The rules get more complex from there and seem to account for every exigency of stick-throwing. If a stick lands and touches the castle without knocking it down, the thrower gets two points and the builder of the castle gets one point for hardiness of construction. The first person to yell ‘retaliation!’ after a strike by the opposite side gets a free throw. If a thrown stick lands and breaks in half and those pieces hit the castle, extra points are awarded for the dual hit. And so on.

It’s a leisurely sport, played under the shade of trees, but not one without its perils. Sticks – a term that doesn’t do some of the weightier missiles justice – can go spinning off unpredictably after they land. One of the players got hit as he tried to dodge a stick, but he assured everyone he was OK because the stick actually hit the phone in his pocket. The second time he wasn’t so lucky – a wooden ‘pock!’ resulting from a whack to the toe echoed nicely through the woods. “Ooooh!” he yelled before hopping up and down on his good foot.

“Wait! That’s minus one point!” another player said.

There was a brief consultation and the score of the guy who was hit went down a point. Turns out that if you get hit, you get penalized for not moving quickly enough.

“And if you draw blood, the person that threw the stick gets a point!” Everyone laughed and agreed.

Periodically a group of hikers would stop and watch. The game had the same hypnotic quality as a game of cornhole. The object of knocking over sticks or getting a beanbag in a hole is a seemingly simple task yet deceptively hard to do. Completing this task is satisfying for onlookers because they too know the skill involved, and have probably attempted it themselves. And Sticks has the added bonus of sticks exploding spectacularly: a hefty stick lobbed underhand came down and squashed a castle so hard one of the sticks broke apart and scattered into the woods. Just as satisfying is the drama of a right-on, piece-flinging takedown.

The game has its own shows of athletic prowess as well. One of the most spectacular moves is obviously one of the hardest to execute. Someone brave enough to catch a stick as it caroms off the ground gets a point for catching it, but if the stick is caught and launched back across the field and knocks down a castle in one fluid motion, the rebounder wins the game right then and there.

“But it has to be one smooth motion, like, ninja-like,” explained one of the players. He demonstrated a fluid catch-spin-toss. “Like that,” he said. “Seriously smooth.” They said it has happened before, but it’s one of those game-defining moves that’s the stuff of lore, something you have to see to believe.

Next week: kicked in the funnybone – the ups and downs of a burgeoning stand-up comic.