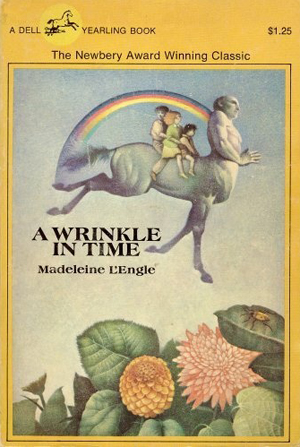 Before last Saturday, I hadn’t been to a block party since I was 10. Our block was a circle — a quarter mile per lap, perfect for the joggers. All around the loop, the townhouses looked alike: two stories, red brick, lawn in front, fenced yard in back. As a very young child, I had a fear of not finding my home amid a host of plausible impostors. Red shutters, I reminded myself. Big tree in front.

The block party was a late-summer event. In the early 80s, health food had not yet come to suburban Virginia (except in my own rather rarefied household). This was a beautiful thing, because whenever a few neighbors gathered together, Cheez Doodles were required to make it a quorum. To a child reared on homemade yogurt and honey-carob balls, Cheez Doodles were forbidden fruit. Like the flowers from which fruit comes, they even had their own pollen — sweet golden grains that stuck to your hands and lips, and left a faint, fragrant stain.

Back then, one of my favorite books was Madeleine L’Engle’s A Wrinkle in Time. If you’ve read it, you might recall that in an alternate universe just a “tesseract” away from ours, an entity called “It” directs inhabitants’ thoughts and movements. Children emerge from their houses at exactly the same moment to bounce identical rubber balls in creepily perfect sync. Bounce, bounce, bounce. One clumsy or perhaps laudably independent child bounces on the off-beat and is pulled roughly into his house by his mother.

No doubt because of that book, my memory — itself wrinkled by time — is convinced that the block party, circa 1984, began in just this way. One Sunday afternoon, by prearranged cue, dozens of doors discharged dozens of humans bearing dozens of bags (Cheez Doodles!) and Pyrex pans (Cheez Doodle casseroles?). In a single rhythmic gesture, the offerings were laid on the long tables set up in the street. Time stopped. Then, like a hundred balls spinning out of the orbit of “It,” all hell broke loose.

By which I mean: people loosened up. They became themselves. Some of them laughed loud and often. Some scarcely smiled. Some sang Reagan’s praises, some (like my father) used words they’d promised not to use in front of children. Some told you what they thought. Some saved their candor for later, behind closed doors.

Saturday’s HRC-sponsored block party at Park and Pleasant started loose. We had name tags, and we made small talk, but we also — some of us, anyway — were old and fast friends. Neighbors who hadn’t been physical neighbors in years or decades returned, spiritual neighbors to the end. The mood was mellow, friendly, a little silly. Chrissy Cruz and Brian Housh pulled up in their HRC-mobile (“to make sure you’re all having fun”) and stayed to mill and talk and load up plates with Carl and Jim’s roast pig. Marcia brought sidewalk chalk, and half a dozen neighborhood kids traced her outline on the road, then scribbled her in. (“Hair, I need hair,” she cried at one point, and they obliged. Under their expert stylings, Marcia was looking good.)

I left early to write this post; my husband stayed. And as always, the thoughts that came were, literally, offbeat — half a beat removed from what I’d seen or heard or thought I’d meant to say. My mind was in childhood. My heart was there, too — going out to the child I was, who stood always a little apart, a step-and-a-half to the side. I’m still like that. A lot of writers are, I think. For me, everything is better relived in words. Or maybe not so much relived — but completed. Experience is completed by words. Call it living in the moment…after. Except the moment after becomes a beautiful and amazing extender of the moment, like a hallway in a dream to rooms you never knew your little house had.

There’s wonder in this, but also melancholy. As I left the party — early, only to stay a little longer in the touch of fingertips to keyboard — a gust of wind brought down brown and yellow leaves. It suddenly felt late, late, late. Time was wrinkling. I was leaving one party and stepping into another, long past. Words and thoughts were the sole connector. Is it possible they’re the only life we really have?