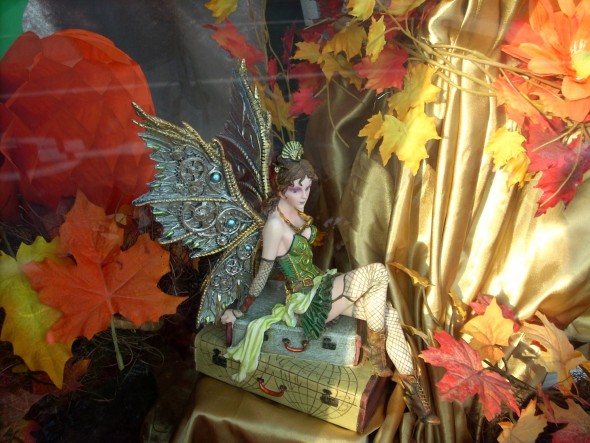 Street Fairy? Back behind glass at House of Ravenwood. (Photo by Audrey Hackett)

“How was your Street Fair?” neighbors asked us after our first one. My husband and I were still too dazed to say much, but later I was struck by the formulation, and accompanying intonation: How was your Street Fair? As though everyone in this village-turned-mosh-pit had his or her own. And the question had a psychedelic ring to it: How was your trip, man? It made me smile then, and makes me smile now, remembering how I suddenly felt I’d engaged in something illicit and intensely private — despite the fact that everyone else was unabashedly doing it, too.

Saturday’s fair was my sixth, and I celebrated the milestone by mostly sitting it out. My husband and sister-in-law had their trips, I mean fairs, and they wandered back sated and weary, like travelers from a faraway land, which is what Street Fair turns the village into — never mind that we live four blocks from downtown. They brought home precious objects and a pack of travelers’ tales. Also, an update on the alpacas, which are Street Fair’s number-one wonder, as far as I’m concerned. Though I have reservations about the whole set-up (the small pen, the hot road in June, the intrusive and phone-wielding humans), these improbable creatures, all necks and knees and liquid eyes and mobile, fleshy lips, draw me in.

My husband headed back downtown in the late afternoon, and this time I joined him. We assumed things would be winding down by 4:30, but clearly we were still Street Fair neophytes, mere infants in our understanding of the exuberance and tenacity of fair-goers. The streets were packed — but the aisles of Tom’s were nearly empty, and as that was our primary destination, we were pleased. We felt so enviably local lugging our canvas grocery tote through the crowds on Xenia Avenue. Other people would have to go home soon (right?), but we lived here! I tried not to look smug, or pitying, but I’m afraid I didn’t wholly succeed.

Our next stop was the John Bryan lawn, where our friend Steve had alerted us that he was playing with his band. I hadn’t realized how much Steve looked like ZZ Top until I saw him in dark glasses, torso slung with an electric guitar. He was very, very cool. The band was so well-amped that we of sensitive ears had a hard time listening up close; we stepped away and ended up stepping toward home, listening en route to Steve & co. make like Gibraltar and rock. Two blocks proved to be the perfect listening distance, and I can say we enjoyed the concert, though we never staked a spot on the lawn.

A couple of hours later, just before dinner, I went for another walk. The setting sun was kindling the turning maples to outrageous shades of orange and gold. The sky was pale blue and filigreed with yellow-pink; the air was cool. Most of the cars that lined our neighborhood were gone. On High Street, a man was taking down his cardboard “No Parking” signs, stowing his sawhorses and pink construction tape. One street over, on Stafford, a huge painted plywood sign was still up: “Parking! $5,” with a bristling arrow pointing left. Like most things in life, the day’s vehicular influx was subjective — bane or boon, depending on past experience, present mood and entrepreneurial bent.

I walked against the tide down Dayton Avenue. Fair-goers, or rather fair-leavers, were trickling home. I stepped off the sidewalk a few times and watched them pass by: the plastic flower-crowned, the wagon-pulled, the slightly buzzed, the cheerful, the cross, the bone-tired, the glassy-eyed, the balloon-trailing, the quietly content. The evening was gathering its dark cloak around all of us. Ahead in the dimness, I heard bells. A belly dancer was jingling my way, still costumed and ringing from wrist to ankle. She smiled as she passed, enjoying the sleigh-bell sound of her own trot, I think.

And when I neared my house, its yellow rectangle of light — of life — filled me with joy at being home. (I felt a similar surge of affection for the glimpses into my neighbors’ suddenly illuminated lives. When I walk at night, I don’t just glance; I stare, I peer. Sorry, neighbors! Now you know.)

How was my Street Fair? Mellow, sleepy, dusky, sweet as a tired child’s cheek on her father’s shoulder. Uneventful, yet somehow full of Street Fairy magic. Peerless blue by day, shadowy black and silver-voiced by night. Begun and ended here, at home. In other words: perfect.